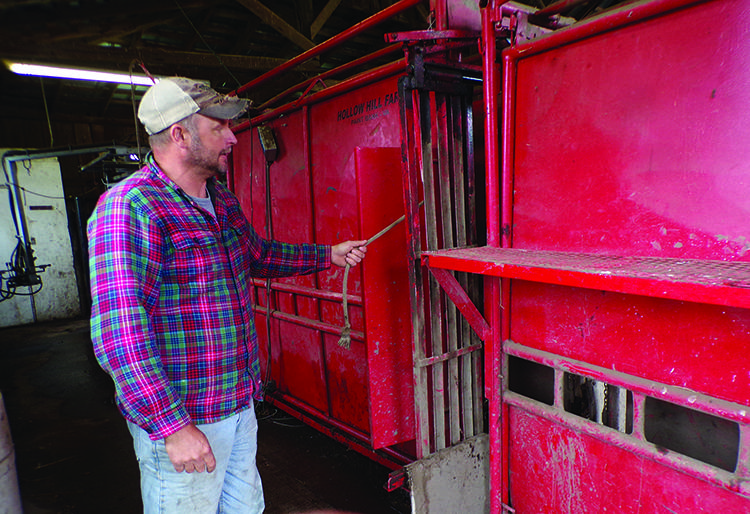 The huge metal chutes needed to work buffalo provide for safety for man and beast. Robert Hale demonstrates how the final gate to the squeeze chute works to ensure both. (Photo by Jane W. Graham)

PAINT BANK, Va. — Robert Hale eased the Hollow Hills Farm truck to the side of the road and pointed to three big, brown, bulky American bison grazing in knee-deep pastures.
The peace and gentleness of the moment belied the power of the iconic bison or, as they say here, buffalo.
“They can run at 30 miles an hour for three minutes, stop on a dime, turn around and do it again,” Hale said of the trio, repeating the fact several times during a tour of the farm.
Hale, the farm manager of Hollow Hills Farm, said that he had isolated the three big bulls, keeping them away from main herd, because of their size. He said he did not want these old bulls to hurt the younger ones.
The biggest of the three measures eight feet-tall and weighs over 2,800 pounds.
A career change brought Hale to Hollow Hills Farm from the coal mining country in Buchanan County, Va.
Overnight, he said he went from working 3.5 miles deep in a 47-inch-high coal mine to herding bison on a farm high in the Alleghany Mountains on the Virginia-West Virginia border.
“This is the first farm I ever worked for,” Hale said who started working at the farm seven years ago. “I told them to teach me how you want it done and I will do it. It’s a lot of learning, an everyday experience.”
The farm is owned by Nancy Malheren, a New Jersey businesswoman, philanthropist and Roanoke College alumni and supporter.
Hale said that the 4,200-acre farm that straddles the Virginia-West Virginia border is home to about 120 momma bison and their calves as well as the needed bulls and replacement animals. The farm includes a small beef cattle herd as well.
The very nature of bison makes caring for them different from caring for beef cattle. Hale said bison are herd animals; where one goes, all go. Cattle are the opposite. They are more likely to scatter.
Moving as a whole herd has developed as protection from predators such as wolves and coyotes, he noted. He finds it sometimes makes them easier to move.
A big difference in handling the bison cows is their aggressiveness when they calf. He said he can tag beef calves immediately after birth, but trying to tag a newborn bison calf is something a farmer does not want to try, he said.
Driving alongside the bison mommas moving toward the creek, Hale called attention to the grunting noise they make in communicating with their babies. He also noted that they use their heads to gently nudge the calves to safety on the side furthest from perceived danger.
In the summer months, Hale uses rotational grazing on the pastures which consist of a mixture of grasses grown here. He feeds them some grain even in summer which helps in handling them. When they see the feed truck come into the field, they come to it.
The truck is designed so the bison can be fed while the driver remains in the cab.
The winter feed comes from the farm; about 1,200 acres are in crops and grass. The cows get dry hay and grain high in protein content. The calves are fed haylage, corn silage and grain.
Hale says he tries to keep at least 800 bales of hay on hand. He is able to store them all under roof.
Potts Creek runs between the pasture fields and a paved state road providing ample water for the herd. Hale uses solar chargers on high tensile wires strung across the creek to contain the bison in the paddock when they are grazing.
Hale said bison have to touch a hot wire with their wet noses or hind parts to learn to respect electricity because their coats are so thick. Amazingly, he added, the hair is as soft as a kitten’s, a comment he proved by handing out samples.
One of the biggest challenges on the buffalo farm is working them, he said, including vaccinations and pregnancy checks. Hollow Hill is equipped with a facility made of heavy pipes and strong metal that allows workers on the outside and above the animals to move them through a series of maneuvers to a squeeze chute where the necessary work can be done in relative safety for man and beast.
He said one female escaped through a side-gate, something he thought impossible. He managed to escape her.
Most of the work is done above the animals by workers on walkways that run outside along the tops of the chutes.
Dr. John Currin, from the Virginia-Maryland College of Veterinary Medicine on the Virginia Tech, is the farm’s veterinarian. He works with the staff in determining the animals’ medical needs.
Hale is one of three employees on the farm and said he consideres the job an an answer to his prayer to work outside the coal mines.