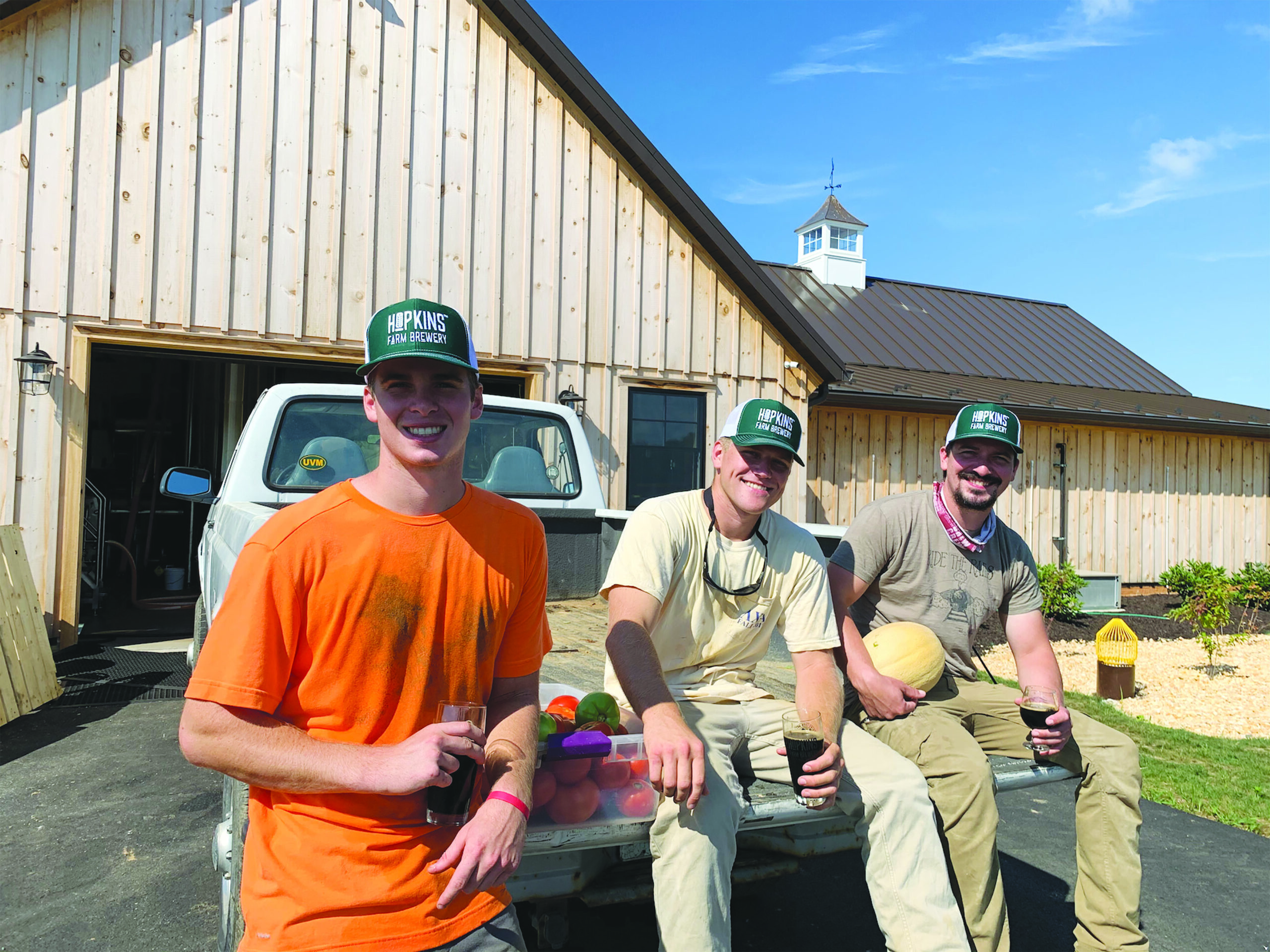 From left, Mitchell Hopkins, Mike Imbierowicz and Aaron Hopkins relax after harvesting cantaloupes for a Summer Lopin cantaloupe beer at Hopkins Farm Brewery in Havre de Grace, Md., last year. Harford County has placed a moratorium on new farm breweries and is considering legislation that would further restrict where they can open. (Photo courtesy Kate Hopkins)

BEL AIR, Md. — Future farm brewery owners in Harford County wouldn’t be required to live on the property, but they’ll have to brew more than a third of their product on the premises within three years of launching, under two amendments the County Council passed last week to pending brewery legislation.

The amendments, approved Oct. 12, alter legislation which a state brewers association called the “most prohibitive” farm brewery regulations statewide. The bill by councilman Robert S. Wagner would outlaw off-site parking for new farm breweries and require them to sit on at least 25 acres — the largest acreage minimum in Maryland, said Kevin Atticks, executive director of the Brewers Association of Maryland.

Wagner said he simply wants to restrict business owners who might exploit the county’s existing laws to place farm breweries on small plots of land abutting residential developments or set up nominal brewing businesses that brew most of their product elsewhere. Although the county has three existing farm breweries, several more have been proposed.

“We’re in a position where we’re trying to fix something that could have been done better at the start,” he said. “I’m not anti-farming. I’m not anti-business. But you need to work towards compatibility. The combine running through the field and working until late is one thing. A music venue and traffic and noise that looks like a renaissance festival three to four days a week. … That’s a totally different animal.”

A small group of residents along Waverly Drive have protested plans for a new farm brewery near their homes. Following the moratorium, the project’s owners announced plans to decamp for Pennsylvania. Wagner has said his bill is not a product of that dispute.

His bill would also require that at least 2 acres of grain, hops, fruit or other ingredients, excluding water, be grown on the farm brewery parcel. Any buildings would also need to rest at least 300 feet from any property line.

“We’re trying to accommodate but not just open the floodgates,” Wagner said.

The brewers association has opposed much of the legislation. Most counties require acreage minimums of between 3 and 10 acres, Atticks said during an Oct. 4 public hearing for the bill. He also criticized a requirement that stipulates any farm brewery must own off-site farmland it uses to produce brewery ingredients. Many farmers rent the cropland they cultivate, and Atticks suggested the language be changed to say the off-site acreage must be owned or “under the control of” the brewery — language more common in county code statewide.

He also said the bill’s prohibition of off-site parking is excessive. Farm breweries should be able to utilize county-approved, nearby lots, with shuttle service, for special events, and the legislation should be clearer about what it seeks to prevent — parking on the roads and in nearby neighborhoods.

The bill seems to violate the state’s right-to-farm laws as well, he said.

This legislation “will have a chilling effect on a blossoming industry,” Atticks said. “While we appreciate your attempt to address community concerns, know that other jurisdictions have found ways to include community input into the review process of new farm breweries.”

Kate Hopkins, manager of Hopkins Farm Brewery in Havre de Grace, said the bill has been a source of controversy among the county’s growing brewing community. Existing farm breweries will be grandfathered into the new legislation.

“We do feel like we’ve lived up to the spirit of the intent of the farm brewery legislation,” Hopkins said.

The council has not scheduled a final vote for the bill.