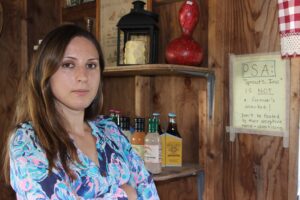 June Jones stands by a “Public Service Announcement” she posted by the register at her family’s farm stand challenging the name of a new grocery store, Sprouts Farmers Market, in Harford County. Jones also filed a consumer complaint, alleging the name is misleading to customers and offensive to farmers.

BEL AIR, Md. — June Jones was working at her family’s Harford County produce stand earlier this summer when customers started asking if her family would be selling at the “new farmers market” coming to Bel Air?

She wasn’t aware of a new market starting for the county’s fruit and vegetable growers. Then she found out they were talking about the new Sprouts Farmers Market grocery store.

“For me, that was my wakeup call that customers were being misled,” she said.

If some of her more faithful customers were confused, Jones said she was even more concerned about infrequent farm stand shoppers who may think they were supporting county farmers by shopping at a store with farmers market in its name.

She grew even more discouraged when searching “farmers market” for her area on the online review forum Yelp, the new store was listed first, ahead of all other country farmers markets and farmer-owned retail stands.

While farmers somewhere grew the food for sale at Sprouts, it was sold at wholesale prices, Jones said, with less of the final sale going to the farmer than if it were sold directly from a farm stand or farmer-run market.

According to the National Farmers Market Coalition, 90 cents of every dollar spent at farmers markets and roadside stands go to the farmer, compared to about 17 cents of all farm products sold nationally.

“The compensation is completely different,” Jones said. “What we’re really talking about here is a living wage and fair compensation for their labor and farmers markets can do that.”

The issue led Jones to post a sign at the family’s farmstand saying “Sprouts Inc. is not a Farmers Market!” to help with their own customer’s questions but she also filed a consumer complaint with the Maryland Attorney General’s Consumer Protection Division, alleging misuse of the farmers market term.

An Attorney General spokesperson confirmed the complaint had been filed but couldn’t comment further as the case remained open. The spokesperson said the division works toward voluntary mediation to resolve issues raised in consumer complaints.

Sprouts Farmers Market’s corporate office in Phoenix, Ariz., did not respond to a request for comment but according to it’s website, the company traces its roots back to 1943 when Henry Boney started a fruit stand in Southern California.

“Sprouts is a healthy grocery store that is inspired by farmers markets, and we trace our lineage back to a single fruit stand in San Diego. We are fully indoors and are open 364 days a year,” the company said.

In 2002, two of Boney’s sons and a grandson opened the first Sprouts Farmers Market with the goal of making unprocessed and organic foods more available and affordable. Sprouts defines local as within the same state as the store or 500 miles.

“Our goal is always to offer great value and strike the right balance among quality, flavor and price,” the company said.

Sprouts merged and acquired other grocery chains including Sunflower Farmers Market in 2012, to now operate more than 320 stores in the United States.

This year the company planned to open 30 new stores including the Bel Air location — the third in Maryland — and another store in Virginia.

Along with other area farmers, Jones has received support from the Maryland Farmers Market Association. In a prepared statement, the association applauded Sprouts Farmers Market for offering shoppers healthy food grown using sustainable practices but said it is not a farmers market as defined by the USDA, Maryland Department of Agriculture or the national Farmers Market Coalition.

“A farmers market is a direct marketing platform for farmers that, by cutting out the middleman, helps shoppers direct more of their food dollars directly to farmers while ensuring that shoppers receive the freshest and most flavorful food in their area,” MFMA said in its statement. “Farmers receive far less money for their produce if sold through wholesale channels to grocery stores like Sprouts and this means your small, local family farmer most likely cannot compete. Farmers market sales are down across the country and by Sprouts calling itself a farmers market this is a disservice to local farmers as well as shoppers.”

Jones said she is also working with Harford County Farm Bureau to propose policy language for the state Farm Bureau to consider at its annual convention in December. With statewide approval of new policy, the Farm Bureau could work with legislators to offer a bill in the next legislative session addressing what can and cannot be called a farmers market.

Currently Maryland regulation defines a farmers market as “a place where a person offers or sells one or more of the following food products directly to the public:” Raw agricultural products; products processed in a private home kitchen, products that are not potentially hazardous and do not require refrigeration, are not processed in a food processing plant or eggs.

In 2010, the Farmers Market Coalition approved its definition of a farmers market which “operates multiple times per year and is organized for the purpose of facilitating personal connections that create mutual benefits for local farmers, shoppers and communities” and stated each market should define the term local and communicate it to the public and “ensure that the farmers market consists principally of farms selling directly to the public products that the farms have produced.”

“It’s probably the best venue for you to meet your farmer,” Jones said. “It’s a great place for informing and introducing their children to nutritious food.”

Beyond the issue of Sprouts name, Jones and farmers market supporters said other grocery chains are capitalizing on the cache of integrity and quality built up by farmers selling directly to consumers. Illinois-based specialty food retailer Fresh Thyme Farmers Market has 75 stores spread across the Midwest and now three stores in western Pennsylvania.

“There’s a marketing push right now and it’s effective,” Jones said. “It’s the aesthetic they want. They want to feel good about what they’re buying.”

Ben Feldman, interim executive director of the Farmers Market Coalition said it’s tough to put a starting point on the trend but it’s something his group has been following for at least the last 10 years.

“As farmers markets have gained in popularity, it has become more pronounced,” he said. “Farmers markets evoke a certain type of emotion, both in terms of quality overall and the experience of buying directly from a farmer.”

Feldman said use of the famers market term has even gone beyond selling food products, noting it has been seen in marketing a beauty and skin care line.

The trend is confusing to consumers and dilutes the ability of farmers markets to be profitable for growers, he said.