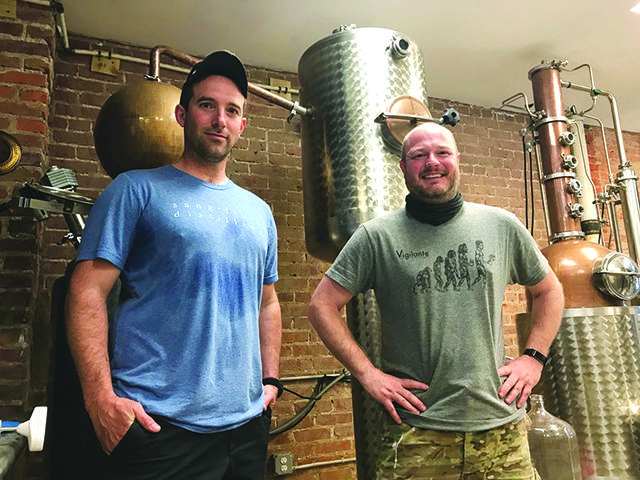 Jeff Harner, left, and Nate Groenendyk stand in front of their distilling equipment at Sangfroid Distillery in Hyattsville, Md. Sangfroid makes fruit brandies and other spirits using apples from an old orchard the duo rescued outside Cumberland. (Photo by Jonathan Cribbs)

HYATTSVILLE, Md. — Jeff Harner’s path to owning an old, rescued apple orchard in Western Maryland began about five years ago on the Internet.

The 37-year-old federal government worker, who had decided that the successful distillation of his own spirits also required the production of his own apples, had balked at the astronomical land prices he found near his home in Montgomery County.

“Ten, 12 thousand dollars an acre just for untouched land that I would have to turn into an orchard,” he said earlier this month, standing behind his bar at Sangfroid Distillery in Prince George’s County.

Instead, he scoured satellite imagery of Western Maryland and old, archived agricultural bulletins for more attractive opportunities. He eventually settled on a handful of orchards, found their records and sent letters to the owners, asking if they were interested in selling. One said yes, and soon enough, Harner owned 43 acres of abandoned orchard just outside Cumberland.

It’s offered Harner, a financial markets analyst for the U.S. Government Accountability Office, and his brother-in-law Nate Groenendyk, a rich connection to the state’s pomological legacy. Although Harner has just begun using the orchard to supply his new craft distillery just south of the University of Maryland, it’s part of a massive chunk of land that used to be owned by the Consolidated Orchard Co., a once-prosperous apple outfit. Western Maryland and the Virginias was one of the country’s prized orcharding hubs and was on the decline before the historic Election Day floods of 1985 reportedly dealt it a near-fatal blow.

In 1910, H.E. Van Deman, the USDA’s first chief pomologist, praised the region’s climate, soil and proximity to urban markets — and its untapped potential.

“But somehow there has been almost no attempt at exploitation by Western Marylanders of their pomological resources,” he wrote. “There is room for thousands more of the best apple orchards. The cost of establishing an orchard there is no greater than elsewhere. A reasonable outlay and a few years time will increase its value ten times at a moderate estimate.”

Eventually, Consolidated’s orchards, including the piece Harner now owns, were sold to the state, which split them into tracts bought by hunters, people looking to build vacation homes and several farmers.

“For the most part it’s untouched,” he said.

Harner became interested in apples while developing an appreciation for cider. After deciding more than a decade ago to make his own, he said he found it difficult to secure the proper apples needed for cider production. Most of the country’s market is dominated by traditional table or dessert apples, which are bred as much for their storage capacity and appearance as their flavor.

After learning to graft the fruit during a visit to a Virginia orchard, Harner acquired several cultivars and planted them in the front yard of his home in Takoma Park and his father’s in Pennsylvania. Then he and his wife, a corporate attorney, began discussing the purchase of their own orchard.

But Harner and Groenendyk’s operation diverges a bit from the region’s orcharding norm. He figures his is one of few nationwide raising apples exclusively for a single distillery. Most distilleries, he said, aren’t handling apples at all.

“In most of them a tanker pulls up to the distillery, pumps in a couple thousand gallons of orchard blend,” he said.

“It could be coming from the West Coast,” said Groenendyk, a former Rhode Island educator and now-full-time distillery hand.

They lucked out finding their orchard, Harner said. It had water and electric (and an old hunting cabin). About 100 leftover apple trees, many of them dying, remained. They spent the last two years clearing several acres of brush so they could transplant about a 100 trees from Harner’s front yard. Eventually, they hope to have at least 600 trees at the orchard across 10 to 12 acres. The trees are all standard-sized and can grow taller than 30 feet.

“That’s a different way of growing apples than even a lot of the cider-focused operations,” Harner said. “They’re growing them on semi-dwarf or dwarf trees maybe 8, 10 feet tall, and you can pick everything by hand.”

He figures an operation like that would provide enough for his distillery and a cidery if he launches one. The list of the orchard’s varieties is large — Arkansas Black, Ashmead’s Kernel, Ashton Bitter, Baldwin, Ben Davis, etc. — but they’re mostly heirloom varieties and Southern, making them tolerant of the region’s humidity and any global-warming-induced rise in temperature over the next several decades. It’s a complicated setup.

“Not a smart way to approach growing apples because you never know what you’re going to have,” Harner said. “You’ve got blossom times, bloom times all over the map.”

They opened Sangfroid Distillery in December 2018, offering just a gin and a pear brandy. Their offerings expanded through the coronavirus pandemic and now include an entire slate of fruit brandies, Dutch-style gins and rye whiskies, which can be ordered online or delivered for free (depending on where a customer lives). Their products can also be found in several restaurants, bars and retail stores in Washington and suburban Maryland.

But Harner and Groenendyk said they’ve developed a special appreciation for the history of Western Maryland orcharding, particularly after touring the region several years ago with Don Corbett, who grew up working orchards in the region and authored a history of the industry for the Hancock Historical Society. He showed them old orchards, abandoned packing houses, pump houses and workers’ homes.

“That really meant a lot to us, and that part of Western Maryland, (the industry) does not exist at all. It is gone,” Harner said. “At one point that was the apple-growing jewel of the state, so it’s kind of a shame that it’s gone and disappeared, but it can come back. It should come back.”