Harvest price decline appears to miss us this year

Harvest is underway and the annual harvest price decline doesn’t appear to be happening this year: Hooray!
The USDA confirmed yield declines across the country in their recent Supply and Demand Balance Sheet estimate update released Monday, Sept. 12.
This was the second month of a more intensive yield measurement from USDA. There were 7,400 farmer surveys included in this month’s report.
This report had corn following trade expectations. This year’s planted acreage was reduced by 1.2 million acres to 88.608 million. Yield was reduced from 175.4 bushels per acre in August to 172.5 this month. 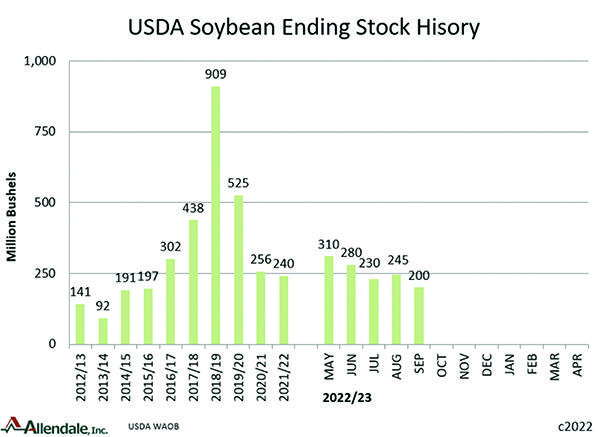 The decline in total production of 419 million bushels was offset by a reduction in usage coming from Feed/residual, (minus-100,000 bushels) ethanol (minus-50,000 bushels), and export (minus-100,000 bushels).
The surprise came from soybeans. New crop plantings were lowered by 0.5 million acres to 87.455.
Yes, lowered! Most traders were expecting an increase in acreage.
Projected yield was also lowered from 51.9 bushels last month to 50.5.
Lowering yields 1.4 bushels was more than the trade expected.
The balance sheet also showed a reduction in usage of minus-20,000 bushels for new crop domestic crush, minus-70,000 bushels from exports and (minus-3,000 bushels) from residual use.
The balance sheet suggests ending stocks at 200 million bushels. If these ending stocks hold, this would be the lowest soybean ending stocks level in seven years. See the chart on this page.
There was no change in the 2022 wheat production estimate.
Futures prices on Sept. 15 had December corn at $6.67 and trading sideways, November beans at $14.60 after a limit up jump after the report, and July 2023 wheat at $8.86.
Should you consider planting winter wheat again? It appears you could lock in a price well more than $7.50 at this time.
It appears a deal was struck between labor and management, avoiding a rail strike that would impact 30 percent of the freight moved in the United States. In ag, it impacts movement of grain, ethanol, soyoil, soymeal, biodiesel, renewable diesel, crude oil and fertilizer, to name a few. The chart to the bottom right reflects the impact on agricultural products.
A strike would have had a major impact on Delmarva. Delmarva does not produce enough corn for its poultry industry. Poultry integrators rely on Midwestern corn to be railed in.
Another way a strike would affect farmers is in the basis. Normally basis reflects the additional cost to source product from another location. 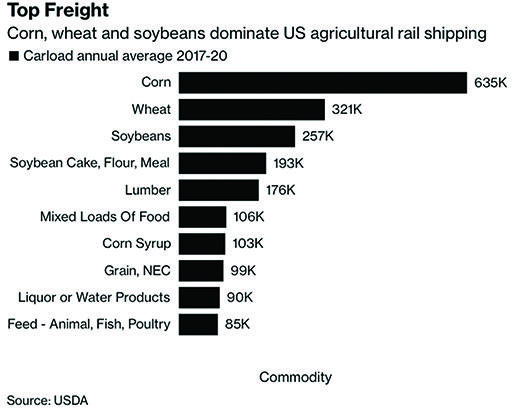 If rail rates increase or are not an alternative, basis could change dramatically. Know your basis when selling your corn.
Inflation remains a huge burden across America. Unfortunately fuel and food show some of the largest increases.
If friends and neighbors complain about food prices and are suggesting that the farming community is getting rich, you need to share with them that according to Scott Irwin, University of Illinois ag economist, only about 15 percent of food costs at the grocery store are the cost of the raw food commodity.
A recent article got my attention entitled, “Why is China so Obsessed With Food Security?” =by N.S.Lyons, Sept 1. The article reads: China is obsessed with food security.
You might not realize just how obsessed: stockpiling rapidly, by the end of the year China — with its 20 percent of the world’s population — is projected to have accumulated and stashed away some-65 percent of the world’s corn and 53 percent of the world’s wheat.
Please take a moment and read this: Then China’s all-important 14th Five-Year Plan for 2021-25, released in March 2021, described food security as a “prerequisite” for national security and set a national food security target for the first time, at 650 million tons of grain per year. Protections to strictly maintain a “red line” of 120 million hectares of minimum farmland (first set in 2007) were enhanced.
While Dutch authorities have been shooting protesting farmers to seize their farmland and build apartment buildings, China has been busy bulldozing half-built suburbs and dismantling ill-considered solar farms that threaten productive agricultural land and water.
(Note: I research material from Allendale, DTN, USDA, University Land Grants and other credible sources in compiling this article. It is not merely my opinion, but rather a consensus of experts in the trade. Looking for a marketing coach or someone to discuss strategies with? Contact me at jehgrain@gmail.com, or call 410-708-8781.)