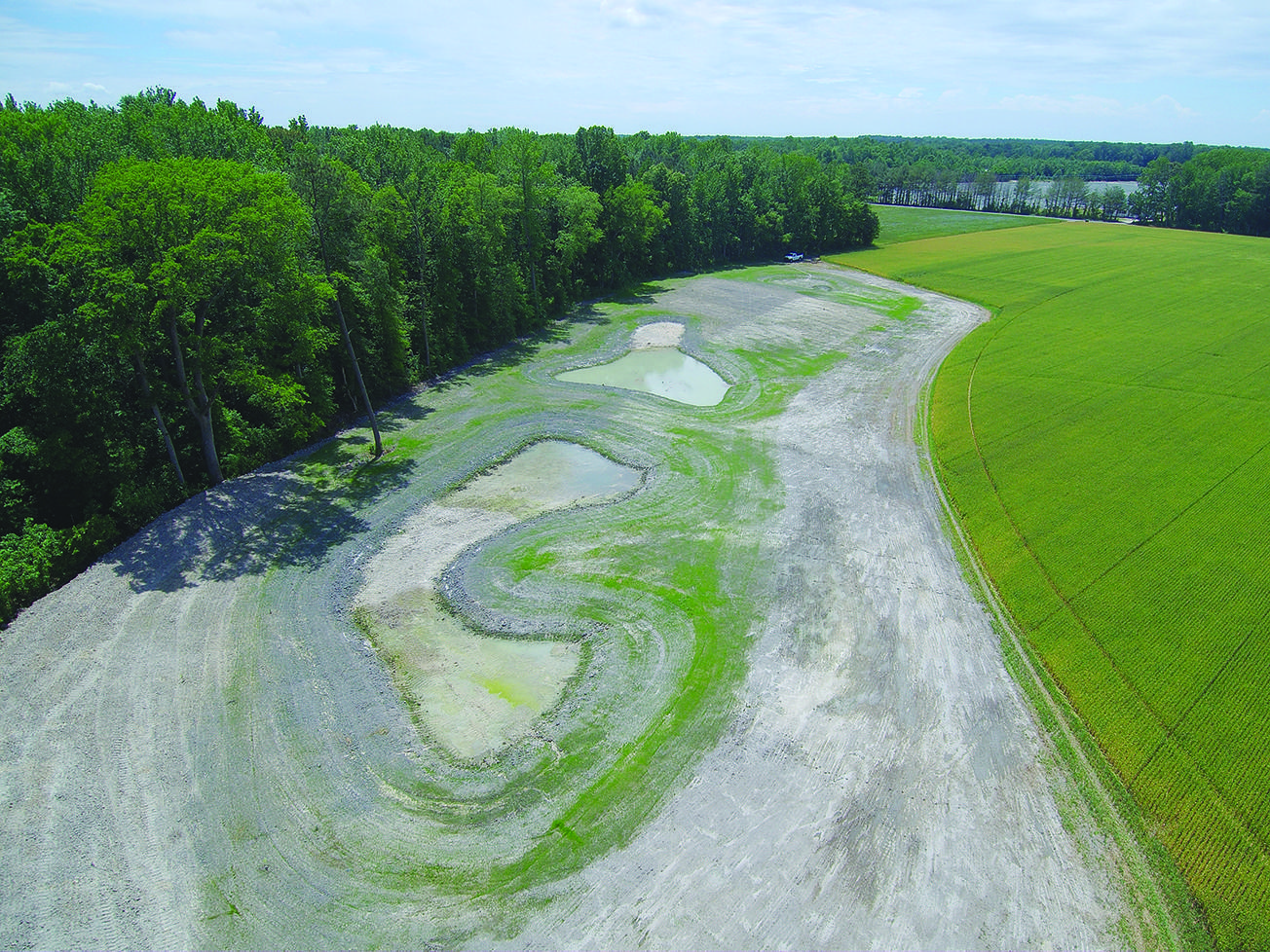 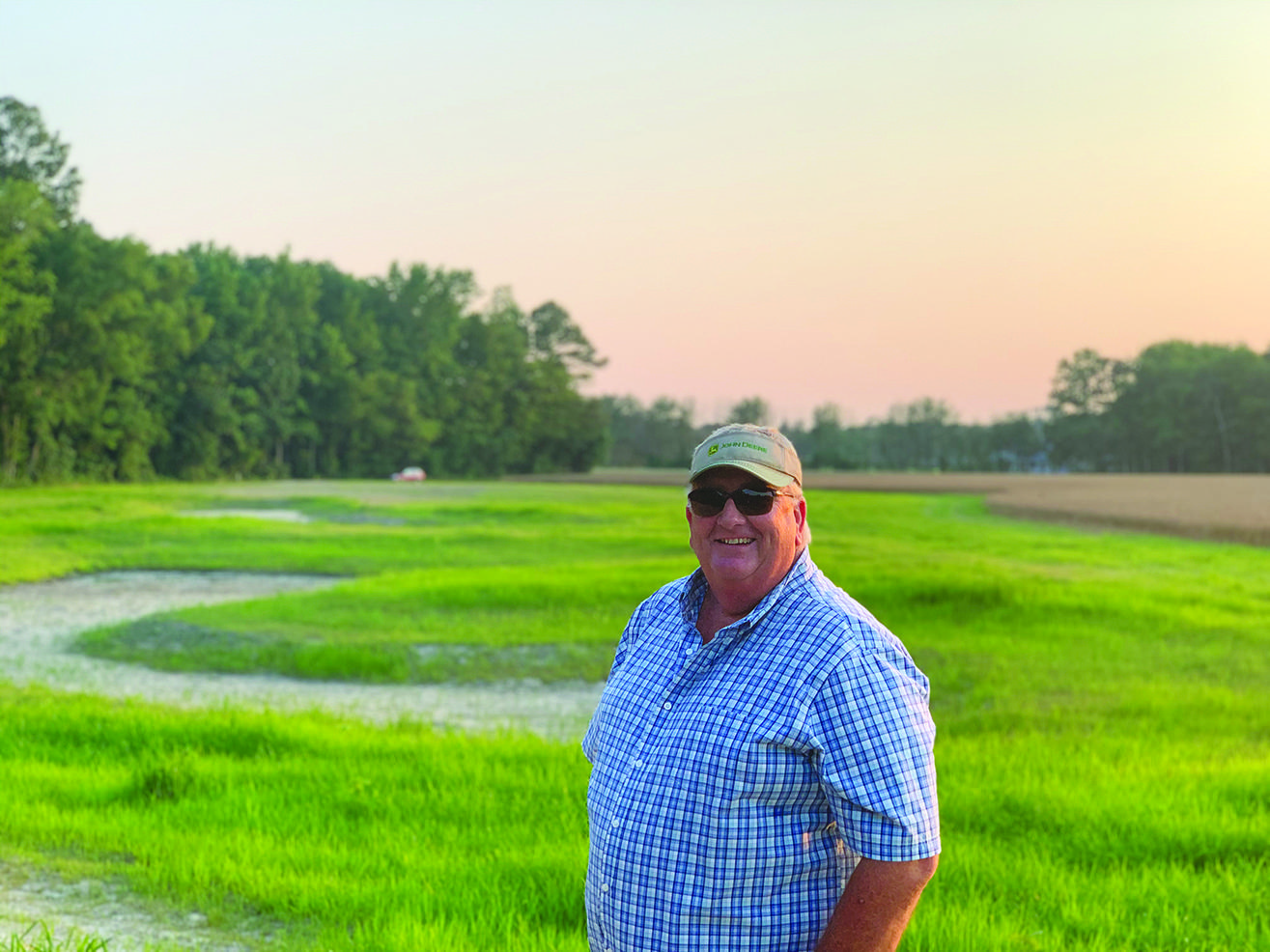 Sussex County farmer Jay Hastings said changing how one corner of a field holds excess water has made the rest of the field more productive. (Photos courtesy Siobhan Kelley)

DELMAR, Del. — By addressing one small part of a field in his operation, Jay Hastings improved the whole field.
Hastings had farmed the field as a tenant for decades, getting a good handle on how water traveled across the farm, settling in one corner on the south end , backing water up into other areas of the field.
“There was nowhere for the water on that field to go,” Hastings said.
When the opportunity came to purchase it about 10 years ago, he knew what he wanted to do about it.
Instead of leaving the marginal, continually soggy flat land of the corner alone.
Hastings said he wanted to install a series of shallow ponds and buffers that would provide better drainage for the rest of the field and add native plants and trees for wildlife habitat.
He added years earlier, a few acres of trees on the field’s north side had been cleared for farming and “giving back just seemed to make sense.”
The problem though, was paying for it.
Hastings said he initially planned on funding the full project himself, but other farming expenses took priority.
“Financially, there was just always something else,” Hastings said. “I would have had to wait until the farm was paid for.”
With cost-share from Hastings, funding for the project came through the Chesapeake Bay Implementation Grant Program. USDA’s Natural Resources Conservation Service supplied design and technical assistance and the Sussex Conservation District coordinated the overall project.
The Delaware Department of Natural Resources and Environmental Control’s Nonpoint Source Program administers the CBIG grant application process and provides technical and financial guidance during the grant application and project period. It is used to help fund water quality-based best management practices projects to reach goals outlined in the state’s Chesapeake Bay Watershed Agreement including water quality improvement. The project involved multiple departments at the Sussex Conservation District.
Bobby Gorski, a conservation planner at the district, developed the initial design after soil scientists and surveyors visited the site to collect samples, aerial photos and other information.
Bryan Jones, preservation program manager, worked on funding and Stephen Gissy, equipment program manager, oversaw construction.
The ponds have slightly different depths, deeper as elevation drops, in order to provide a cascading effect as water overflows from one to the next.
“It’s like a mixing bowl, a soup bowl and a salad bowl,” Hastings said, describing the depths. “It’s kind of filtering itself.”
Along with wildlife habitat, the native plants improve water quality in the Chesapeake Bay watershed by grabbing nutrients from the water and holding soil in place, Gorski said.
“It was good to do something like this to help manage the area so it didn’t grow up in invasive species and noxious species,” Gorski said. “It’s just a really neat little corner.”
Completed last summer, Hastings said the ponds have been doing their job, holding water and drawing excess off the rest of the field.
“Very seldom do you see standing water anywhere now and if you do it’s not there long,” he said. “In doing that, it seemed like it made the rest of the farm more productive.”
He said he’s noticed that he can put equipment in the field sooner after large rain events or irrigation cycles and expects to be able to plant the year’s cash crop sooner than before the project was installed.
“I would say in a normal year it gives me a 10-14 day window to plant earlier,” he said.
Hastings said he expects the area to be easier to maintain now than before.
He doesn’t have briars and brambles encroaching on the rest of the field that has to be repeatedly mowed back.
“That grass keeps all that other stuff from growing,” he said.
On the wildlife habitat front, Hastings said he’s also hopeful that as the project grows, it will form a significant barrier to deer coming into the field’s production area.
While he got the ball rolling on the project, he credits the district staff with making it happen.
“They care about what they do and why they’re doing it,” Hastings said. “If I have the opportunity to have a project done, they’re the people that I’m going to call whether they’re paying for it or I’m paying for it. They’re my go-tos.”