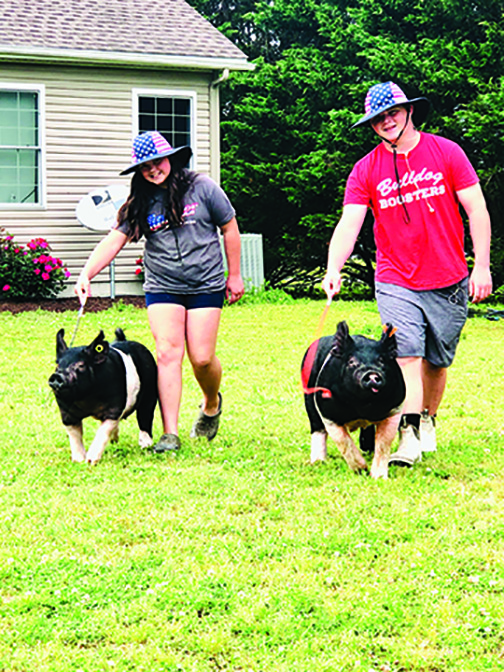 Kassidy and Brayden Hearn exercise hogs outsde their home in Laurel, Del. The siblings said they are excited to show livestock at the 2020 Delaware State Fair.
Photo courtesy Stephanie Hearn

LAUREL, Del. — The Hearn youngsters at Sandyloam Farm in Laurel, Del., Brayden, 15, and Kassidy, 13, were delighted to learn that there will be animal competitions at the 2020 Delaware State Fair. Over the years, they have amassed a number of trophies, banners and ribbons with their horses, pigs, goats and lambs. Kassidy started at the young age of 18 months, riding lead line. Brayden started showing at age 6. Last year, he showed the Grand Champion Market Hog, and Kassidy showed the Grand Supreme Champion Gilt.

The children are encouraged and supported in their endeavors by their parents, Brian and Stephanie Hearn.

Brian was born in Laurel and worked with melon farmers when he was young. He and Stephanie met at Delaware Valley College in Doylestown, Pa. She was an animal science major; he majored in horticulture. When they finished school, their plan called for 12 acres of flat land, which they wouldn’t find in Pennsylvania, Stephanie said. They found the land in Laurel, where they now have a small family farm. They rent another 15 acres or so to expand their produce operation.

“We sell our produce on our stand on Route 24 directly across Lakeside Greenhouses,” Stephanie said, explaining Brian has worked with Jay Windsor, former University of Delaware Extension ag agent and owner of the greenhouses. Since college, Brian has worked for the University of Delaware and is currently the farm manager at the Carvel Research and Education Center. Stephanie is an account manager for Dutch Valley Foods, a family-owned bulk foods distributor in Pennsylvania.

Besides their off-farm jobs, they raise the traditional produce — watermelon, cantaloupe, squash and zucchini, Stephanie said. “We sold wholesale in Pennsylvania for five or six years, but we’ve recently stopped. We’re too busy.”

A look around the farm would explain why. The family has four horses, four sows and plenty of pigs, plus goats and lambs.

Stephanie said when they bought the farm, there was a house trailer and a shed. Now the trailer is gone and there’s a “real house.” An extension was put on the shed and there are four animal barns. “We built them all ourselves. We’re not generational farmers, but Brian grew up with the love of agriculture, working on farms. He’s super knowledgeable and we’ve got a great life, I think.

“In 2019, my dad decided to have a small farrowing operation and created a farm business called Pops’ Show Pigs,” Stephanie said. “When we moved to Delaware, I told Dad I wasn’t coming back, so he has an efficiency apartment on the farm. Brian’s parents live right next door. My mom and her husband just moved in across the street, so the kids have all their grandparents within walking distance.

“We wouldn’t be able to do what we do here without everyone’s participation. The grandparents support the kids at shows and like to watch them here on the farm every day, too.”

In addition to the show pigs, Brayden shows lambs and Kassidy shows goats and horses. When you raise one animal, it’s easier to add other species, Stephanie said.

The youngsters work with their animals every day.

“We buy the animals as babies,” Brayden said. “The pigs are about 60 pounds going in. We let them be friends before we push them too far. They love marshmallows. That gets their attention. We get them hooked on feed. We go outside with them and create a bond so they feel trust when we’re out there with them.

Kassidy added, “We groom the pigs every day. We use a special lotion, a moisturizer, and with a long brush, rub into skin to keep it moisturized. It’s better than playing in the mud.

“We wash them and sunbathe them so when they go to the fair, dark, their black or blue parts get dark. It makes them look better in the ring.”

The lambs and goats get a weekly wash with soap. Kassidy described the grooming system in which they use brushes to work the hair up. “That makes them look bigger and more attractive,” she explained. “Three times a week, we rinse them and put ProHair on them. That helps hair growth. We work the hair up. You want wing hair on their legs.

“We work them by walking. On our property we have a big section where we can take the animals around a couple of times.”

Kassidy also described how they teach lambs and goats to brace. Using a platform just off the ground, they back up the animal, so it thinks it is going to fall off, their muscles tighten and it pushes into the child’s knee. They learn to set legs so that the legs don’t move and are even. In the show ring, young exhibitors take great care to set their animals’ legs, all the while trying to keep eye contact with the judge.

Stephanie explained that muscle development is important for market animals. “They are raising the animals for sale. It requires daily care, walks and programs. Consistency is all part of what you see in the ring on show day.”

Brayden has excelled in more than the show ring. Last year he attended a National FFA Competition in Indiana, representing his Laurel Middle School with a tomato project, and placed fourth out of 16 in the nation.

“It was a big deal,” his mother said. “He had to win at the science fair over summer and at the state fair. He’s starting center for football — his dad is one of the coaches — but he missed a game to go to Indiana. There was a lot of discussion of whether he should go, but it was the chance of a lifetime.”

The project that Brayden and his partner, Adian Bell, worked on was about the use of Humic Acid on tomatoes to improve efficiency and yield.

Brayden’s father was a huge proponent, Stephanie said. Brayden had great mentors, including his FFA ag teachers, Sarah Ruggiero and Matt Wood. Brayden had to raise money for the trip and had to do presentations before the school board and at a Farm Bureau meeting. “It was a great opportunity for public speaking.”

“None of their success would be possible without us working with great livestock breeders/mentors and having a family that supports them,” Stephanie added. “We believe banners and ribbons are won at home, working consistently when no one is looking. They have certainly accomplished a lot in a short period of time.”

The Hearn’s always schedule their annual vacation during fair week and stay in a camper on the fairgrounds. “Some people go to Disney World or the beach. For us, the fair is where to go. We see friends we don’t always get to see. It’s the best 10 days for us.”

Of the many adjustments the fair has made for safety in the coronavirus pandemic, fair officials gave regular campers the option not to camp this year without losing their spot in the future. The Hearn’s decided, however, with the number of animals they show and all the moving in and out, that they would go ahead and camp.

“That’s extremely appreciated,” Stephanie said. “It’s better than just cancelling. This will be harder on us, timewise, but as a livestock family, we are very happy with the state fair.

“We already had plans. We had already bought the animals. It’s an investment, but we have to be committed to the breeders and mentors we work with. They did their part six months ago. We bought animals like any normal year and sold some animals to other families. If the fair had been cancelled, we would have found a show to go to. Learning is so helpful to these kids and their friends and all involved.”

The Livestock Extravaganza where market class champions are typically selected has been cancelled. The breed and maket champions will be chosen on the day of the individual shows rather than days later.

Stephanie said the exhibitors were asked to send in photos and a short video of their animals.

“The livestock auction funds college, next year’s project, future vehicles,” Stephanie said. “It’s a payoff for the child’s investment and all the hard work. It’s an opportunity for businesses to give back to youth development, which is why we do what we do.”

Brayden said, “Once you put in all that work, you get to see it pay off. To do well or win is a great feeling. Last year I had the Grand Champion Market Hog, the best pig in the whole barn. There’s no feeling like it! We were also very lucky to have great mentors to set us on the right path, and now we’re starting to be mentors to other kids like they were to us.”

Stephanie said showing livestock for youth at the Delaware State Fair is quite unique.

“Even though Delaware is a small state, the amount of friendship and competitiveness is very special,” she said. “They can be in show ring competing, but in the evening hanging out by our campers, our livestock family is so close… Not all state fairs have that feeling. We go to other fairs to show, but it’s not like that there.”