Helping with a hot meal (Viewpoint)

As someone who grew up in the Mid-Atlantic, I’ve always monitored storms during hurricane season, hoping most would head back out to sea and quickly dissipate before reaching us on Delmarva. From the comfort of my own home, I pray for those impacted, and marveled at the first responders and neighbors who show up from all over the country to provide relief.

As we watched Hurricane Laura grow in size and intensity during the last week of August, I quickly learned I was blessed to be in a position where I may be able to go and help. Reports of the devastation left behind in Lake Charles, La., and the surrounding areas by sustained winds of up to 150 miles per hour were hard to comprehend.

I’ve worked in the ag industry for over 11 years, having spent most of that time in farm lending. In the summer of 2019, I joined Mountaire Farms as a new Community Relations Manager and was charged with one major goal: to wake up everyday and try to make the world a better place. 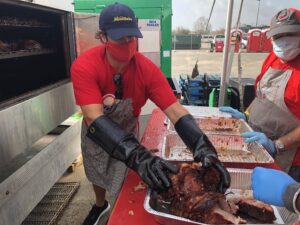 As Hurricane Laura barreled toward the Texas/Louisiana Coast, the call came in from Operation BBQ Relief (OBR), a group of competitive barbecue chefs that mobilize to feed the masses impacted by disasters.  They were already strategizing for their next deployment. My boss had developed a great partnership with OBR over the years, sending chicken and resources to aid relief efforts in areas recovering from natural disasters. Operation BBQ Relief served 120,000 meals over 13 days during their first deployment in response to the 2011 tornado in Joplin, Missouri, and they’ve never looked back. In nine years, the organization has served over 8 million hot meals, amassed a network of over 10,000 volunteers, and managed to be a beacon of hope for countless families all over the United States.

As I arrived at my office on Friday, Aug. 28, I could sense the urgency growing amongst team Mountaire. We had already set the wheels in motion to mobilize a tractor trailer with 40,000 pounds of chicken to get down to Louisiana ASAP. It had been freshly processed the day before and was ready to go, just awaiting orders. There was just one problem: We didn’t know where we were going. At that point all cellular service, utility services, and running water in Lake Charles and the surrounding areas had been knocked offline. OBR boots on the ground were working diligently to coordinate their deployment instructions, but they too were troubleshooting on the fly.

As the day continued, we knew it was time to act. We did what anyone would do: we started Googling. We started looking for flights, rental cars, hotels, anything and everything we needed to get to Louisiana. Mountaire had approved travel for me and my boss to meet our truck driver in Lake Charles and be a part of the much-needed labor force required to feed people. We found the most central point in Lake Charles and we told our truck driver to start heading south.

We managed to string together a series of connecting flights through small regional airports to get us to Lafayette, La. If you’ve been in an airport since COVID-19 precautions have been in place, then you already know it’s a weird experience. Security seems to move a bit quicker, the terminals feel eerily quiet and empty, and the in-flight experience is a little more “stifling” (mask pun). For the most part the flights were the easy part.

It was once we landed in Lafayette on Aug. 31 that the real journey began. From there we would rent a car and use the hotel in Lafayette as home base, commuting roughly 70 miles each morning and evening to get to and from Lake Charles. We tracked down our truck driver, who had arrived the night before. 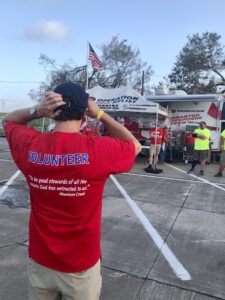 We left our hotel the morning of Sept. 1 at 5 a.m. As we headed southwest on the interstate you couldn’t help but notice the never-ending caravan of taillights, all heading in the same direction under the dark morning sky. As we got within 30 miles of Lake Charles, we began to realize it was still very dark. There were no street lights, no ambient glow from neighboring businesses or towns.

This being our first morning venturing into Lake Charles, we were hyper alert and focused. Paying close attention to signs of life, signs of destruction, or actual signs for “alternate routes.” It was that attentiveness that allowed us to quickly respond when, out of nowhere, as the skies were just starting to get bright enough to see the horizon, we dodged a power line that was broken in half and hanging over the roadway at about a 45-degree angle. As we slowed down to go around, we saw another, and another, and another. As far as we could see down the two-lane rural highway, there were power lines and telephone poles down. This went on for miles, and was indicative of every utility pole or substation we would see that week. Powerlines and utility poles strewn about, often bringing traffic to a halt.

I should’ve known then that I was not prepared for the devastation we were driving into. The trip into Lake Charles that first morning will stay with me forever. With each mile closer to the epicenter of the storm, the damage became more visible. Even though you could only see the faint outline of the evidence in the morning sun, we could still make out the fallen buildings, piles of rubble, overturned big rigs, and train cars. There was an eerie sense that even though you couldn’t see it, you were surrounded by total chaos, and that was coupled with deafening silence at the same time.

The car rides in the morning and the afternoon became our opportunity to decompress, process all that we had seen and experienced that day, and to pray and hope for the recovery of this culturally rich community.

Our days with the crew at OBR were action packed and exciting. We learned that because of COVID and other concerns, OBR’s volunteer numbers were down significantly. The first day we arrived to volunteer was the organizations second day cooking in Lake Charles, and we helped to prepare roughly 8,000 meals with a team of about two dozen volunteers. I was amazed at what we had accomplished. I couldn’t imagine that we would have been able to feed so many people with the limited volunteers we had that day. The OBR veterans reassured me that they were “just getting started,” and they weren’t kidding.

As we arrived for our second day of volunteering we learned that the meal count had grown, as was the natural pattern at these types of events. When there is no cellular service for miles, no power, no running water, it can be very difficult to get information. So, OBR relies on old school communication, older than carrier pigeons and smoke signals. They rely on word of mouth. They count on the grassroots efforts of the community and the people there to assist. The following day, Sept. 2, we were told the count that day would exceed 20,000 meals. As I looked around I realized our pool of volunteers looked even leaner than the previous day. Many of the people I saw the day before had been on site for five days already. They were part of the set-up crew who comes down ahead of time, and they were taking a day or two of reprieve as is suggested by the staff at OBR.

We were exhausted that day as we left the Walmart parking lot where OBR headquarters had been established. But as we drove through a neighborhood to see house after house with blue tarps over the roof or trees toppled on the homes and cars, we were heartened to see a Salvation Army delivery truck handing out the very same hot meals we had prepared. We watched as a few people emerged from these houses to grab them and go back inside to eat before they continued the cleanup effort.

The third and final day was our longest. There was such an overwhelming amount of work that needed to be done in that area, and we put our best foot forward and pushed ourselves to our limits. As we saw the final meal count, we took a moment to celebrate what we were a part of. Over 24,000 meals between lunch and dinner on Thursday, Sept. 3. Incredible how quickly the good news of a hot meal had spread throughout the area, but not nearly as incredible as the meaningful impact a hot meal can have for someone who has lost everything.

Operation BBQ Relief helps to restore hope to communities that have lost everything. They remind us that while mother nature can change the landscape in the blink of an eye, the human spirit is still the strongest and most resilient thing there is. And when we work together and look out for one another, we can overcome any challenge.

Three days flew by. We had spent 90 percent of our time in Lake Charles at the OBR deployment site, cooking, cleaning, repeating. I was blown away by the stories I heard from other volunteers. I was brought to tears by the compassion and generosity that first responders, civic leader, and concerned citizens from all over the region showed as they flooded the area with chainsaws, tarps, coolers, medical supplies and materials to start the recovery and rebuilding process.

2020 has been an interesting year. The world has been living in the wake of COVID-19 as we try to establish new norms and best practices that will allows us to “get back to life as usual.” Despite all the curveballs 2020 has thrown our way, Hurricane Laura will be my major takeaway. It was a lifechanging experience for me because I got to see firsthand how people’s lives can change in the blink of an eye from a natural disaster.

I am grateful to be a part of a team that truly cares, who not just talks the talk but walks the walk.  A team that is willing to roll up their sleeves, and get dirty.  Mountaire Cares. It’s not just a slogan. I’m grateful to be reminded that as Americans, regardless of the things that make us different, we all come together to help each other, in good times and bad. And the next time we have a Hurricane warning approach our Delmarva Peninsula, I will be taking it seriously.