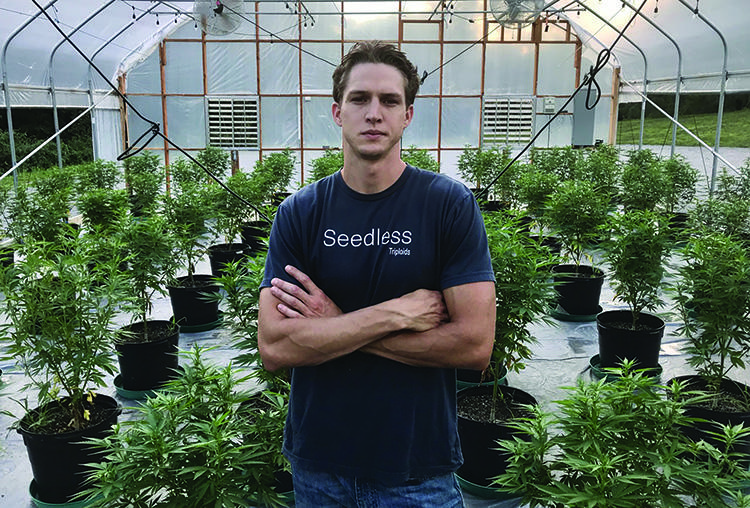 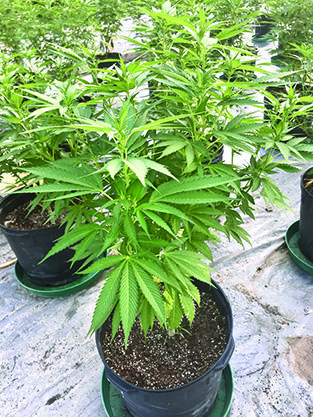 Graham Snider works with his uncle, Darren O’Brien (not pictured), as a cultivator and extractor at Hemp Hills Farm In Sparks Glencoe, Md. The farm, which raises hemp, extracts CBD oil from the plant which it puts into products such as tinctures, creams and gummy fruit. (Photos by Jonathan Cribbs)

Injuries brought Darren O’Brien to hemp about a decade ago.

Sitting inside a horse barn housing his fledgling hemp-products business in Baltimore County, Md., last week, O’Brien rattled off a list of personal medical procedures large enough to sink a pro football team’s season: two back surgeries, one to his knee, another to his ankle and an ACL replacement, among others.

He’s used CBD as a pain reliever, and three years ago, he began growing and purchasing hemp, extracting its oil and using it to make retail products that he sells both online to consumers and directly to other buyers. He started Hemp Hills Farm and works with his 28-year-old nephew, Graham Snider, who has years of experience as a grower. Business, so far, hasn’t been bad, but it also hasn’t been good, he said.

Since the state legalized hemp production in 2018, the crop has been problematic for growers, who began in a brand-new, rapidly expanding market that quickly flooded with product as states nationwide also welcomed production. In May 2020, nearly three quarters of the year’s previous crop in Maryland remained unsold in storage, industry leaders said at the time.

After collecting economic data from Maryland producers over the last two years, the University of Maryland Extension published a report in June that detailed an oversupplied market crushing the crop’s profitability in the state and nationwide.

“We’re not saying, ‘Don’t (grow it), but we’re saying use caution getting involved with the production,” said Andrew Ristvey, an Extension agent overseeing hemp research. “It’s really difficult to make a profit off of this crop. … It adds up to a lot of time, effort and treasure to a market that may not be there.”

Hemp producers are paid for the percentage of CBD — cannabidiol — per pound of biomass, a price that fluctuates with the market. Before the 2019 harvest, the Extension said, growers could receive up to $4 for each percent of CBD per pound of biomass, but that rate eventually plummeted to just 50 cents.

“Their prices have dropped precipitously because there’s just so much out there,” Ristvey said.

The consequences for growers can be significant. Using an average yield of 2,000 pounds of biomass per acre, the average production cost, including inputs and harvest labor, was about $56,000 per acre in 2019, the Extension said. When the price was $4, growers producing biomass with 15-percent CBD could net $64,000 per acre. A more realistic price would be about $1, the Extension said. At that point, a farmer not only wouldn’t make money, he or she would lose $26,000 per acre.

“We’re not really sure where we stand with the profitability of this crop,” Ristvey said.

Regionally, regulators are seeing hesitation among growers. In Delaware, following a year-long pilot program that restricted acreage, 2020 was the first full production year. Thirteen farmers raised a crop. This year, 16 are growing, said Jessica Inhof, the environmental program administrator in the Delaware Department of Agriculture.

Last year, not all farmers were able to sell their crop and some struggled with other obstacles. A rainstorm destroyed one crop, and another died in an indoor growing facility after it lost power, she said.

“Air conditioning in some indoor facilities has not been able to keep up,” she said.

In Virginia, 876 farmers registered with the state to grow this year, said Erin Williams, a senior policy analyst at the Virginia Department of Agriculture and Consumer Services — down considerably from last year’s 1,200 registered growers. The planned acreage of roughly 9,700 remains the same, however. In Maryland, 95 farmers registered to grow this year, about the same as last year, said Jim Drews, program manager for the turf and seed section of the state Department of Agriculture.

“There might be some pains in the marketplace, but there’s still some enthusiasm for people growing it,” he said.

The Pew Charitable Trusts, a global public-policy nonprofit based in Philadelphia, declared the hemp boom over in a report last month. Despite its potential use across all kinds of products and industries, the hemp market is rebalancing and may take years to mature, it said. Total production acreage nationwide has plummeted from more than 500,000 in 2019 to about 100,000 registered this year. Many in the industry criticize the U.S. Food and Drug Administration for the amount of time it has taken to approve CBD for food and dietary supplements. Growers foresee a time when CBD will be used in smoking products and foods, and its fiber will be used to replace plastic, to make thread and ropes, floorboards and other products — a vibrant multi-billion industry.

When that time arrives, Hemp Hills Farm will be ready. For now, the crop O’Brien grows is funneled directly into his products, bypassing the immature crop markets.

“If you’re just growing flower on 15-acre plots and think you’re going to sell it to the dispensaries or to the ‘head shops’, is what I’ll call them, for flower to smoke, then, yeah, that’s not a good plan,” he said.

Instead, Hemp Hills hawks products such as creams, tinctures and lip balms on its website and for other buyers. O’Brien and his fellow investors have spent hundreds of thousands of dollars to build the business.

“In any business, if you don’t have the tenacity or willpower to keep going, even if it’s bad or good, it’s not going to work,” he said.