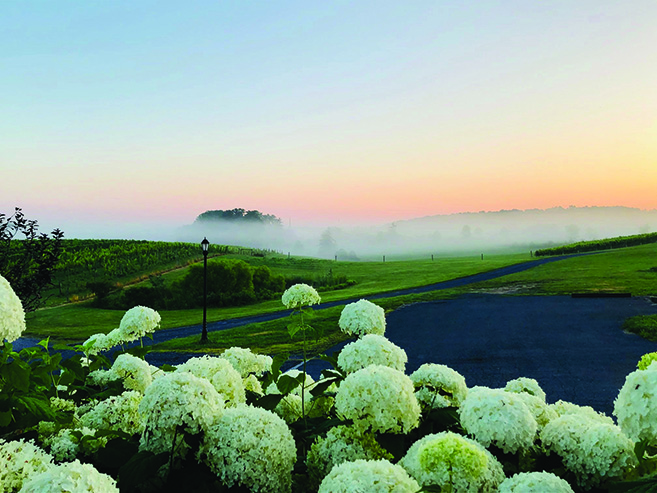 FISHERSVILLE, Va. — John Higgs has been spending his retirement transforming an overgrown family orchard into a scenic vineyard and successful winery.
Higgs in 2000 returned from Europe with wife, Shelby, to his native Virginia and the apple orchard his father founded in 1904.
The orchard, set near a historic Native American trail and road for which the vineyard is named, once contributed to Virginia’s recognition as the largest apple producer in the nation.
The former chemical engineer and Philip Morris plant manager purchased the Shenandoah Valley property from his sister, Brooke, who inherited it after the 1960s.
Higgs served in the U.S. Army in those days, and Shenandoah Valley apples fell victim to what he called an industrialized U.S. food market.
It wasn’t uncommon for Augusta County farmers like Higgs to leave the family farm. By 2004, however, he had built corporations and done most of the things he wanted to do, he said. He retired with a lot of interest in and energy for new projects, he said.
“Once we realized that growing grapes and making wine in Virginia was of the quality we had become accustomed to in Europe, the idea emerged that we could bring the land and business back to life, albeit with a different fruit,” Higgs said.
It was a good time to start a vineyard in Virginia, John’s son, Robert Higgs, said. Only 100 of the state’s now 300 or so existed, he said.
The Higgs family’s Barren Ridge apple orchard was also some 1,200 to 1,400 feet above sea level, bestowing upon it a semi-arid climate that isn’t as conducive to the fungi and bacteria that damp and humid climates are, Higgs said.
Set between the Blue Ridge and Allegheny mountains, ancient Allegheny soils slough downhill, blending with loamy soils and weathered clay and shale, Robert said.
The mixture affects alkalinity and according to him renders an acidity that works well for white and red wines.
When the grapevines at Barren Ridge Vineyards struggle with minimal rainfall and irrigation, they reach deep into the soil and nourish themselves with minerals, Robert said.
“My father fell in love with it,” he said. “I really liked what he was doing here.”
The Higgses enrolled in viticulture and winemaking classes that explained “terroir” and the effects of microorganisms, insects, funguses and bacteria, Robert said. They learned to blend wines and to discern scents such as those that mimic nail polish in order to discover defaults, or defects, that suggest bacteria in the grapes.
“You get a good sense of the terroir,” Robert said, citing the soil, the climate and the people working the land. “We try to get what’s in the vineyard into the glass and, I think, provide something that is uniquely our own.”
The Higgses even with a formal education derive most of their knowledge from paid consultants, he said.
“They have so many years of expertise,” Robert said, noting their familiarity particularly in areas such as grape growing in the region.
Barren Ridge Vineyards wines first debuted with grapes grown elsewhere. As the vineyard progressed, Robert Higgs spent months-long visits harvesting grapes and making wines. When he and wife Angela returned to Virginia full-time, he said he worked 24 hours doing a “little of everything.
“There are so many processes,” Robert said. “At the same time, it’s exciting.”
John said they prefer to grow as naturally as possible. He cited the example of baiting bats to help control insects. The rodents are known to eat huge amounts of mosquitoes, scorpions, moths and other insects each night.
“We’re trying to be as gracious as we can to the planet,” he said.
John added he is especially interested in combining his love for tourism with that of viticulture by drawing visitors from the Rhone region of France where he resided to the vineyard.
Barren Ridge Vineyards is situated between the protected wildlife and forests of Shenandoah National Park and Monongahela and George Washington & Jefferson National Forests and the vibrant city of Staunton. There, some 100 independently owned retail shops are complemented by restaurants that offer farm fresh dining.
The vineyard itself is situated along a farm trail that the Virginia is for Lovers tourism corporation promotes as “Fields of Gold.” The trail is home to four of the state’s five leading farms as well as lodging facilities, farmers markets, eateries, fishing locales and more.
Barren Ridge itself hosts events such as live weekend musical performances and wine tastings.
Shelby Higgs, John’s wife and Robert’s mother, runs the tasting room where Robert said most of the wines are sold.
Barren Ridge wines have meanwhile continued to win numerous awards, including Virginia Governors Cup silvers and bronzes.
They can also be found at local stores such as a Wegmans, Robert said, and at Castle Vineyards in Luray and the Valley Pine Farm Market in Weyers Cave.