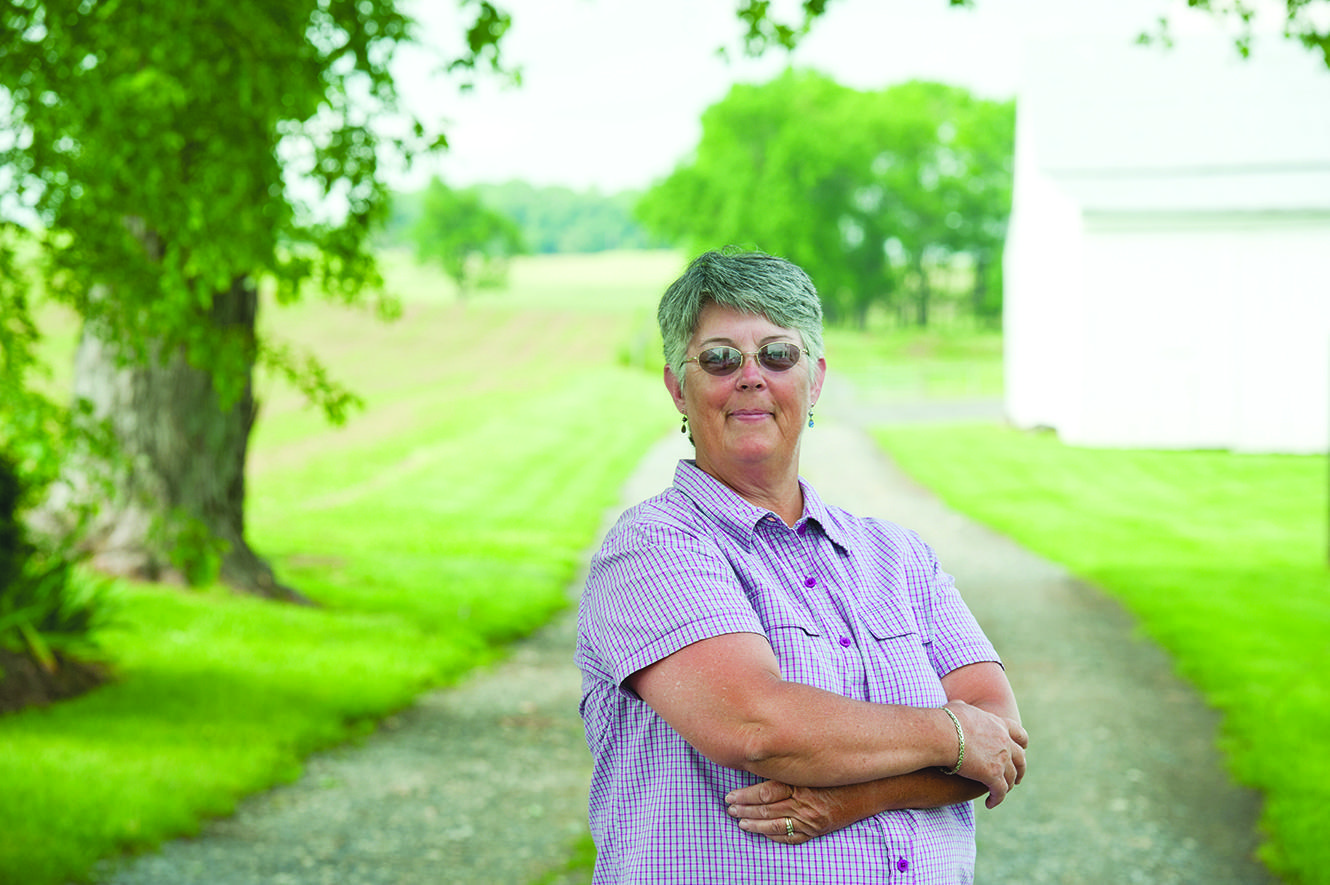 Belinda Burrier has seen first-hand the benefits of growing high oleic soybeans, both as a farmer and leader with the soy checkoff. (Photo by Edwin Remsberg)

UNION BRIDGE, Md, — It was 2014. Belinda Burrier was in her first year as a farmer-leader with the soy checkoff when she was presented with an opportunity to grow high oleic soybeans on her farm in north-central Maryland.
She decided to take a chance. And she hasn’t looked back.
“We planted 50 acres to start with, and they performed just as well as our commodity beans, so we knew it was something we wanted to keep in our seed program,” Burrier said.
High oleic soybeans grow the same in the field but produce a higher amount of monounsaturated fat than commodity soybeans.
The innovative beans provide extended fry life, a neutral flavor profile and other useful traits for food. High oleic soybean oil also has industrial applications such as asphalt, shoesand motor oil.
“My husband and I were just talking about our seed plan for next year,” Burrier said. “We usually start really planning for the next year as soon as the beans from this year are out of the ground.”
Like many other farmers, Burrier and her husband, who farm together, are watching their beans throughout the season.
She said for them, high oleic soybeans check all the boxes year after year.
“The reason why it’s good for us is that there’s no difference in the growing conditions there, the seeds are placed exactly the same into the fields, and management as far as fertilizer or pesticide application is exactly the same,” Burrier said. “We now dedicate 100 percent of our acres to high oleic soybeans.”
Kevin Wilson, USB director, who farms in Walton Ind., has grown high oleic soybeans for seven years. He said in the initial years of high oleic soybean production, while seed and agriculture companies were working to get growers familial with growing the crop, food companies were testing the oil in their products.
For many companies, that testing has concluded with positive results and they are looking to make a transition to high oleic soybean oil.
“We’re starting to get more companies involved. That’s going to be a key point in all this,” Wilson said. “Once they make a switch, they want to make sure there’s going to be a good supply of it to use.”
Wilson also said an extra bonus in demand for high oleic oil is its popularity in industrial uses such as synthetic motor oils and automotive lubricants.
“There’s a future there,” Wilson said of the non-food uses. “It’s just continuing to work hard and get more companies interested.”
There are only a few differences for farmers growing high oleic, according to the USB.
The soybeans need to be stored separately, your equipment needs to be cleaned out before moving between fields and you get a little extra on your paycheck in the form of a premium.
“For farmers, it adds to our bottom line,” Burrier said. “It’s a way to add more value to our crops.”
Through her role with the checkoff over the last seven years, Burrier has seen the demand for these soybeans grow as the checkoff has continued to invest in them.
“The checkoff has grown demand for high oleic here in the U.S. so our customers don’t have to go elsewhere. We can provide what they’re looking for and grow our demand,” Burrier adds.
High oleic soybeans currently have select availability across the Midwest and Delmarva Peninsula. Farmers are able to work with a multitude of delivery locations available and earn a premium on their production.
A recent industry study from third-party collaborator, Qualisoy, indicated if high oleic growth continues as projected, a 1,000-acre soybean farmer will net between $34,000 and $50,000 more from soybean farming as a result of higher prices driven by high oleic demand.