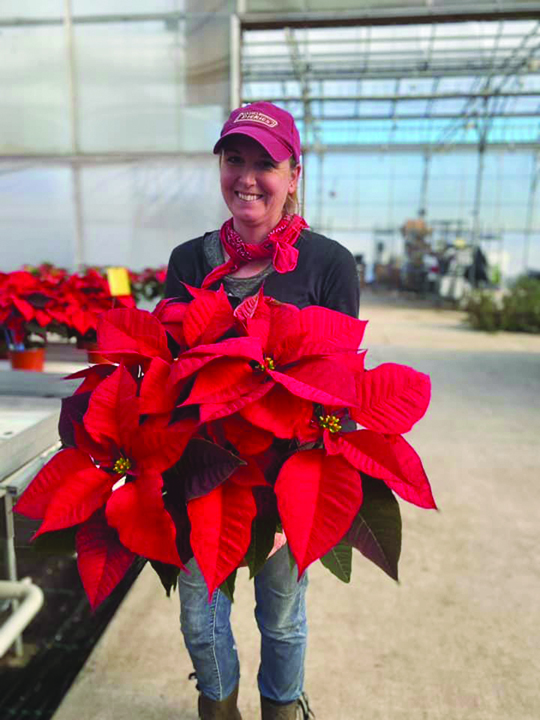 Elsbeth Maresch, a Trail Nurseries grower, shows off one of their luscious, full poinsettia plants that they grow each year in 6 1/2-inch pots. (Photo courtesy Kathy Miller, Trail Nurseries)

“We do what we do well, like grow vegetables from seed,” said Carrie Engel, greenhouse manger at Valley View Farms in Cockeysville, Md. “Why grow something when you can get it just as well from other places?,” she asked referring to the additional poinsettias that their independent garden center (IGC) orders from wholesale nurseries like Hillcrest Nursery in Millers, Md. and Trail Nurseries in Dover, Pa., to supplement the 2,500 poinsettias Valley View grows each year in two of its own greenhouses.
Of the two wholesale nurseries, Hillcrest, which specializes in herbs, is the larger operation “usually growing about 30,000 poinsettias a year,” said Sherrill Kroeck, one of Hillcrest’s greenhouse growers. “We start in June with unrooted cuttings and, beginning at the end of November, deliver the finished plants on our own trucks to IGCs throughout the region. So, our poinsettias are a six- to seven-month crop for us.”
Trail Nurseries starts a little bit later in the summer with already-rooted liner plugs. “With all the different sizes, we grow maybe 5,000 to 6,000 each year, which we’ve always done since we took over the nursery’s operation in 2006,” said Kathy Miller, one of Trail Nurseries three co-owners.
“Our biggest size is an 8 1/2-inch pot,” Miller continued, “but the size we sell the most of is our 6 1/2-inch pot. It’s a premium plant because we do a little bigger, higher-end pot [than the standard 6 inch pot,] and then grow them on a larger center.”
“Trail grows their poinsettias beautifully,” agreed Engel. She especially appreciated Trail Nurseries’ larger “8 inch pots,” which she noted “are huge and beautiful because Kathy gives them lots of room.”
“It’s good,” Engel continued, “because they’re beautiful; but, it’s bad because they take up a lot of retail space.”
Even so, she noted that some of Trail’s larger poinsettias are almost always part of the poinsettias Valley View provides to WBAL to decorate its broadcast news set during the winter holiday season.
Engel also relies on Trail Nurseries to provide them with their painted poinsettias, a service that Miller noted they’ve been “doing for years. It’s something different we do for our IGC customers,” Miller explained, “because they usually only want a small amount and this way they don’t have to buy all the supplies and such.”
Floral painting supplies aside, both Miller and Kroeck agreed the biggest challenge for wholesale poinsettia growers is each year’s new varieties. “We need to learn each new variety’s growth habit,” Kroeck said, “and how best to control it, so that it finishes the size we want it.”
“There will always be the tried-and-true varieties,” Kroeck continued, “but we also add many new varieties each year.” One of Hillcrest’s new varieties this year is “Christmas Mouse,” a compact novelty poinsettia variety with nearly round, red bracts resembling a mouse’s ears. “Adorable!” said Kroeck.
Trail Nurseries also “tries to keep it to the basics,” said Miller. “We usually try just a couple new ones each year.”
She was most excited about their trial of Dümmen Orange’s “Frozen” variety, a hardy mid-season white that “is very white and has a really pretty U-shaped bract. Since we use whites for our floral painting and it’s a fairly vivid white,” Miller continued, “we’ll definitely keep that one for next year as it has a lot of potential.”
Engel also pointed to the variety’s potential. “For years white poinsettias were more ivory than white,” she explained. “‘Frozen’ is a much brighter white with fairly full bracts representing a breeding breakthrough.”
Yet, even as their greenhouses empty thanks to daily deliveries of their poinsettia plants to IGCs across the Mid-Atlantic region, both wholesale nurseries have already pivoted, Hillcrest back to its specialty in herb cell-packs, which they grow year-round, and Trail Nurseries to its early season spring annuals such as primroses and regal geraniums.