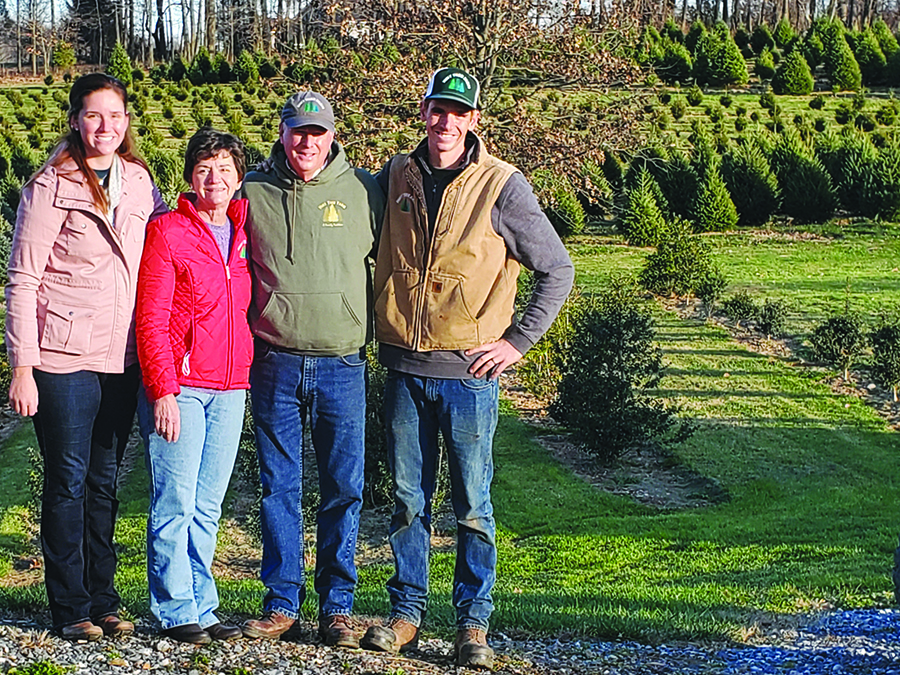 The Hirt family, from left, Melinda, Cynthia, Clyde, and Matthew — the farm’s second and third generations of owners — pose in front of some of the farm’s 16 acres of Christmas trees. (Photo by Joan M. Kasura)

WESTMINSTER, Md. — On Nov. 5, just in time for the 2020 Christmas season and more than 40 years after the first trees were planted by Clyde Hirt’s father, Hirt Tree Farm became the 37th farm added to the Carroll County Barn Quilt Trail, a collaborative project of the Carroll County Office of Tourism along with other Carroll County organizations.
Designed by Melinda Hirt, daughter of Clyde and Cynthia Hirt, the farm’s second-generation owners, the barn quilt features the farm’s logo of three clustered fir trees along with an arrangement of holly leaves and berries, all rendered in a style appropriately reminiscent of Baltimore album quilts.
The pristine shape of the barn quilt’s Christmas trees is echoed in the farm’s rows of evergreens marching to the horizon, just up the hill from the Hirts’ classic red barn, where the barn quilt is mounted,
Indeed, a Facebook video from July 2020 showcases Clyde Hirt’s precise movements as he manually trims a tree at his 20 acre farm located less than five miles from the heart of downtown Westminster.
Just one of many offseason chores necessary to sustain a successful early winter season, Hirt’s son, Matthew, “has taken over doing most of the trimming using a SAJE trimmer – an engine on a backpack with a portable sickle bar trimmer.” That has left Clyde Hirt free to manually do their custom trimming, including the trimming that turns a portion of their Canaan firs into “Who Trees.”
The “Who Tree” concept originated with a Canaan fir whose top had twisted in a shape that resembled the outline of a Who from Whoville as featured in Dr. Seuss’s “How the Grinch Stole Christmas.” Amused by the original tree, Hirt posted a photo of it on the farm’s Facebook page, which generated more than a dozen requests from that year’s customers to purchase the “Who Tree.”
Inspired by its popularity, Hirt began to intentionally manipulate a portion of each year’s Canaan fir harvest into “Who Trees.” Clyde said he was able to do so because Canaan firs “almost always grow multiple tops, which usually need to be managed, but here they give you something to work with.”
Although about 80 percent of the farm consists of Douglas firs, the Hirts have begun moving to other varieties such as Canaan firs, which have become Hirt Tree Farm’s second most planted tree thanks to their resistance to needlecast disease. Additional varieties planted include Nordmann firs, which Clyde noted has a lush deep green foliage, and Korean firs, which tend to be more tolerant of Maryland’s humid summers. Even so, “you have to watch for everything,” Matthew explained, “such as spider mites this fall because it was so dry.”
Canaan firs also fit into the Hirts’ double cropping program. “Since we’re so tight on space,” explained Hirt, “we’re doing double cropping or interplanting, where you have a 7 foot tree and a younger 3 foot tree planted in between.”
In a business where every year of growth counts, the Hirts have found that “interplanting helps keep a better rotation of their trees. The only reason we would re-plow a field,” said Hirt, “would be to change the spacing between the rows from 6 feet to 7 or 7 1/2 feet.”
Although the majority of their business centers around their fields of choose and cut trees, the Hirts are also one of the last tree farms to offer the option of live balled trees. “We used to sell a 100 of those 10 years ago,” said Hirt, “but now we only sell 25 to 30 a year.”
On the other hand, the t-shirts, hoodie sweatshirts and hats emblazoned with the farm’s name and logo “sell really well.” Same with the wreaths that the Hirts assemble from the wide variety of evergreen plantings they also grow and then harvest from their farm.
Recently, their customers have included “a lot of people who have come to the farm for the first time,” said Hirt. “Choose and cut has gotten to be a big thing with families,” he continued; and, even with the COVID-19 restrictions in place, both Hirts expected this year to be just as busy as ever.