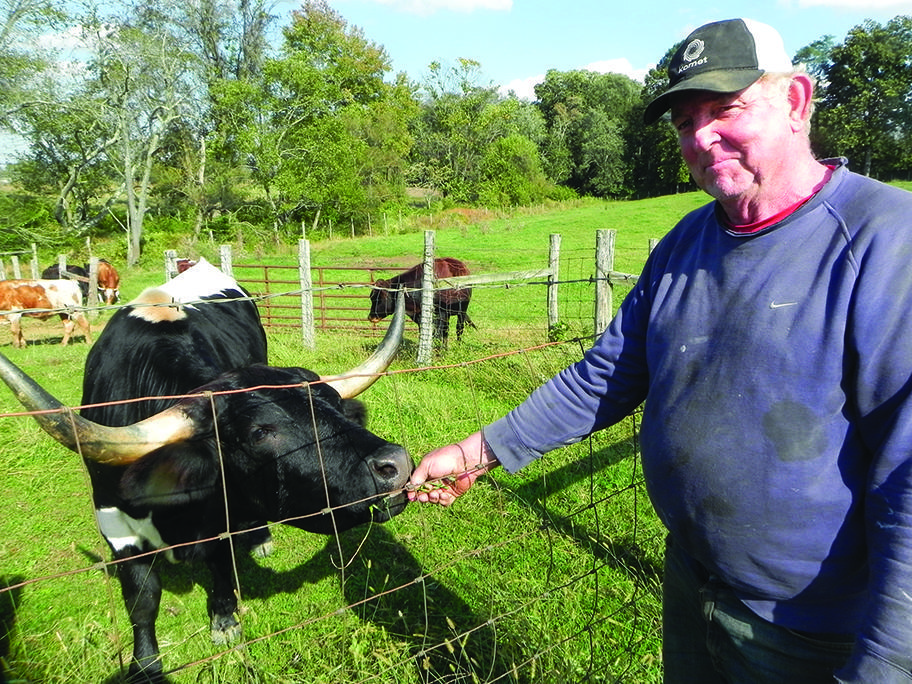 CHESTERFIELD — Veteran farmer Ray Hlubik, one of seven brothers, was raised on a dairy, beef and vegetable farm started by his father Joseph here.
After the family got out of the dairy business and sold their cows in the mid-1960s, and shortly after he was graduated from Cook College in 1970, Ray Hlubik began raising a few beef cattle, with the benefit of knowing the benefits seasoned cow manure can bring to soil health.
Today, he oversees a herd of about 20 beef cattle in a grass-based system. While he and his wife Nancy and children and some of his brothers have built up a steady retail clientele over the years on what he calls “a smaller farm, just 175 acres,” the cows in the nearby pasture have proven a hit with farm stand customers, many of whom don’t get to see cows on a regular basis.”
Hlubik Farms’ pasture-raised beef has many loyal patrons in Chesterfield and neighboring towns. So much so, that when two or three processed cows come back from the facility in Berlin, Hlubik said he often sells out within a matter of two weeks.
Recalling his youth on the farm one sunny Saturday in mid-October, Hlubik said his father and mother and siblings were “truck farmers.”
“We always had dairy animals, but in 1966 we pretty much got out of dairy and we did a lot of truck farming; we did tomatoes for Campbell’s Soup, we did a lot of sweet corn, a lot of different things,” Hlubik explained. “Truck farming as I think of it means more vegetables and grains as opposed to raising livestock.”
While transitioning from dairy to more vegetable farming, “I was farming all the way down to the creek that runs through the property, near where the cattle are now,” he said. “Looking at it one day I decided it’s not a great idea to farm that close to the creek so I decided to put the pasture in.
“We got a few beef animals and at the same time we were raising hay and straw.”
It made sense to feed the cows in winter months with lesser grade hay and straw, he said, “because of the weather patterns we have here in New Jersey,” it’s often difficult to make a full crop of grade A hay and straw in New Jersey.
“You always seem to get some hay and straw that is of a lesser grade, and dairy and beef cows can pretty much process almost anything you feed them,” he said. “So if I get hay that gets rained on it’s not good for a horse, but I can put it in the barn and the cows will eat it.”
Hlubik said it takes him about 30 months to bring a calf to finishing. No steroids are involved and he’s feeding them hay and straw and grains in the winter at $2 a day.
A bridge over the creek allows cows to get to the other side of the pasture and a tunnel under the roadway allows them to get across the road.
Carefully spaced fencing allows them to get to tanks of water from the creek, but not close enough to risk spoiling it with nearby manure.
Through the 1970s and 1980s Hlubik made good use of his grade B hay and straw to feed the cows with, as well as scraps from the vegetable growing operations, and then at some point in the 1990’s “people began getting the idea that grass-fed beef is better tasting beef. So it’s become a niche market and people are willing to pay more for it.”
Hlubik brings two or three cows for processing every couple of months to Bringhurst Meats, an in-demand beef processing facility in Berlin.
Because of federal regulations on meat processing, Hlubik is only allowed to sell his pasture-raised beef in quarters to his loyal customer base, but with the possibility of another beef processing facility opening soon in northwest New Jersey equipped with a licensed, certified, USDA inspector, that could take the pressure off smaller livestock producers.
“Because it’s grass-fed, pasture-raised beef, with no steroids, we command a premium price. Our advertising consists of some signs out front once the animals have come back from Bringhurst Meats, and my daughter posts it on the website and on our Facebook page.
Usually within a week to 10 days after I get the animals back, I’ve got it all sold. We just sell it in lots.”
Because he’s not dealing with cuts of beef like O’Donnell in South Brunswick, who also raises cattle in Columbus, Hlubik finds it somewhat easier to make appointments for beef processing at the facility in Berlin.
So he does not have to book his processing six and eight months out.
“It depends on the time of year. Sometimes I can call and get an appointment in three or four weeks, but in the fall, they often get busier with deer processing, I’ll often have to take them down there in January or February,” he said. “There are a lot more smaller farmers raising animals to preserve their farmland assessment, and right now, Bringhurst in Berlin is the only processor we’ve got, so it would be a big plus if we can get a USDA-staffed facility back again here in New Jersey.
“Then I could sell all the major cuts of meat as well as selling it in lots.”