Hoges looking out 200 years ahead 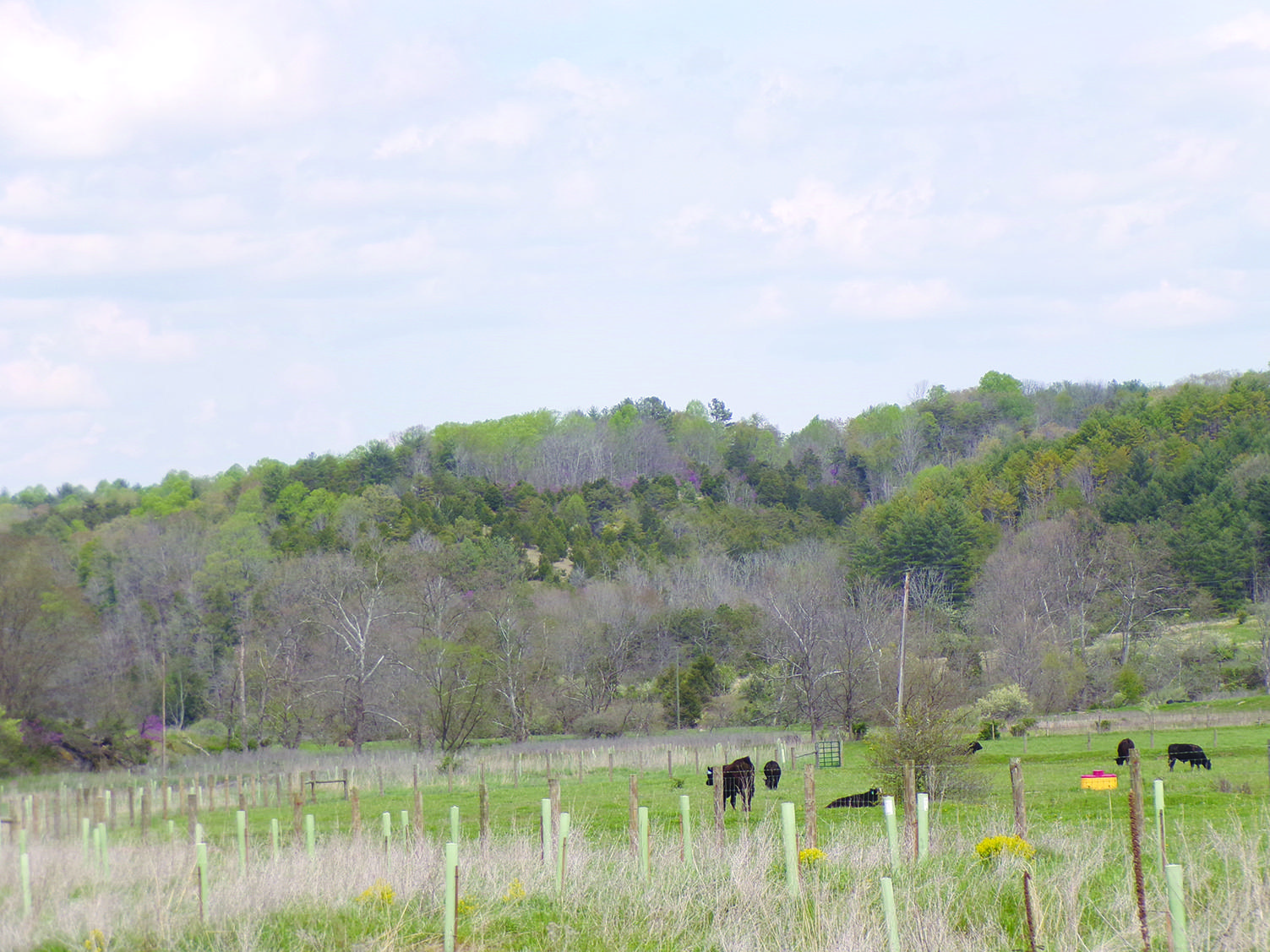 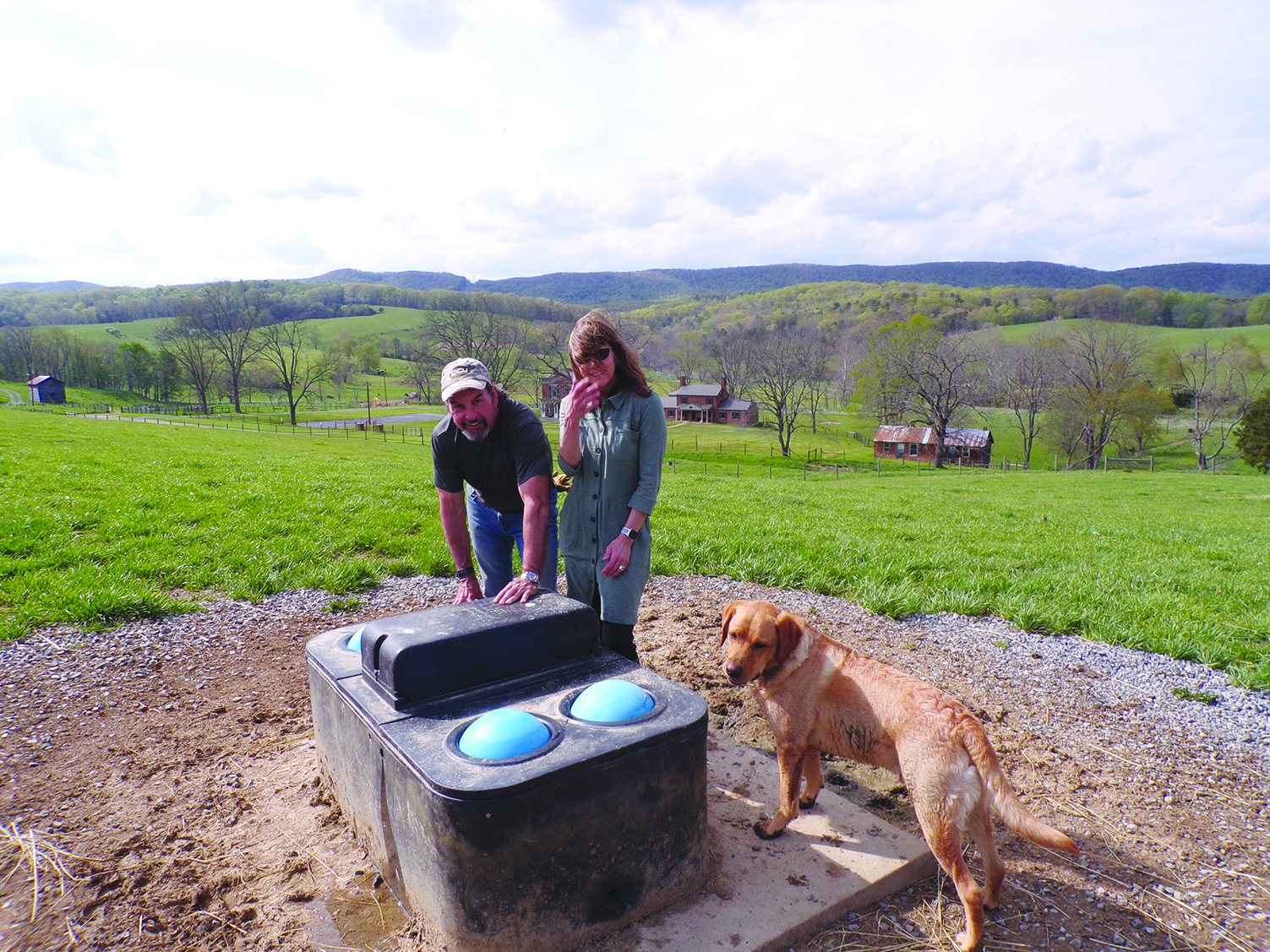 Tom and Madeline Hoge, with their dog Branch, check one of the 13 watering troughs they have installed in their efforts to create an environmentally responsible farm. (Photos by Jane W. Graham)

DUBLIN, Va. — As the seventh generation to operate Belle Hampton Farm, Tom and Madeline Hoge said they have set the goal of creating a sustainable workable farm that will support the next seven generations of Tom’s family.
“The farm is the glue that holds the family together,” Tom and Madeline said.
The couple moved from Ohio in 2018 to become the seventh generation to operate Belle Hampton Farm in Pulaski County.
They were recently recognized as winners of the New River-Yadkin River 2020 Clean Water Farm Award Grand Basin Award from the Virginia Department of Conservation and Recreation.
Belle Hampton was home to Virginia’s 43rd governor, James Hoge Tyler who served from 1890 to 1894.
A family office, conference rooms, a modern kitchen and accommodations for private visitors now occupy the former governor’s home. Tom and Madeline live in a renovated cottage beside the main house.
Tom said he began developing a conservation plan for the farm in 2017 before he and Madeline moved here.
Tom’s research included finding a breed of cattle that would work in a rotational grazing system and be environmentally and economically sustainable.
He chose the Japanese breed, Wagyu for their calm demeaner and ease of calving. The meat, with intense marbling characteristics often commands a premium.
The Hoges implemented a three-phase project on the 283-acre farm. Of these, 180 are grazeable, Tom said. More than 30,000 feet of fencing has been installed to keep the cattle out of Shuffle Branch and Back Creek as they flow to New River just miles away.
They have also installed 10,000 feet of water line to 13 troughs located in the fenced paddocks. Water flows from two big springs that have historically been used as water sources on the farm. The final phase was the creation of a 45-acre riparian buffer.
The conservation plan was developed with the help of the Skyline Soil and Water District’s senior conservation officer Chris Barbour.
“Tom wants to do everything the right way to make it a showplace and demonstrate good environmental stewardship by protecting the water that originates and flows through the farm to make it better as it leaves the farm,” Barbour said.
Barbour expressed gratitude for Tom’s approach, and added he has been a model client as they have worked together for nearly four years on this project.
About 1,000 trees have been planted along Shuffle Creek from the western property line to the eastern water line. Spring leaves are emerging on the newly planted trees that have trunks encased in protective tubing. Content Wagyu cattle graze on the other side of an electric fence.
As Tom checked on the cattle, a bald eagle soared overhead and a great blue heron flew along Back Creek.
“The ecosystem is so balanced,” Tom said. “The coyotes are big and alert. The snakes are shinny and clean. Everything is very healthy.”
He included bear, deer and different birds in his list. He said neither coyotes, birds of prey or buzzards have caused problems so far.
“It feels like home,” Madeline said, adding that the 10 other places they have lived did not have that feeling. “This is much like home.”
In a January 2020 interview with The Delmarva Farmer, Tom said he did not have a farming background.
After meeting another descendant of Gov. Tyler who owned the farm and wanted to sell it, Tom and Madeline bought it.
“We were looking for a final destination,” he said in the earlier interview. “After 18 months, we decided to buy the place. We wanted to bring it back but so it is economically sustainable.”