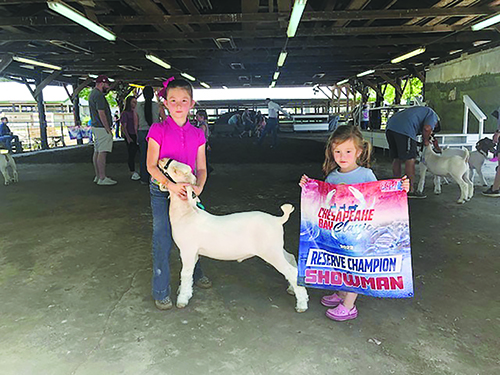 As proclaimed in the banner held by her little sister, Adalyn Holtz and her goat, Gizmo, took reserve champion showman at the Chesapeake Bay Classic in Centreville, Md. Gizmo is also scheduled to compete at the Delaware State Fair. (Photo courtesy Kate Holtz)

CAMDEN, Del. — Adalyn “Ady” Holtz, 8-year-old daughter of E.J. and Kate Holtz, is looking forward to the Delaware State Fair.
She had hoped to show her prize-winning rooster, which her grandparents, Ed and Tina Holtz, helped her exhibit in New York earlier this year.
She and the Langshan rooster took champion junior honors at the Northeastern Poultry Congress annual show.
Unfortunately, due to pathogenic avian influenza, all live poultry competitions and exhibits at the 2022 Delaware State Fair have been canceled.
Ady still has a goat and two market lambs to enter in competitions at the fair. This will be her second year to compete.
The goat and lambs are kept at her grandparents’ home nearby, where such animals are a hobby, and have been since Ady’s father began exhibiting at the fair when he was a boy.
Four chickens out of the backyard flock of about 50 belong to Ady.
Ady works with her goat and lambs almost every other day. She walks them for exercise and practice in the show ring, she sets them up with proper foot placement and grooms them. The goat, Gizmo, gets a bath once a week.
She tried her hand at shearing her lamb, but had to turn the process over to an adult.
“It looks easier than it is,” her mother said. “But she wanted to at least try.”
Ady does realize that her animals are raised to be sold. She was able to keep the lamb she showed last year, but sold one of the two goats she took to the fair. “It’s all part of the project,” her mother explained.
The family recently took four goat does to Ohio, where the does will stay for six weeks or so to be bred. “We don’t have a billy goat,” Holtz explained. “They smell, and they’re expensive.”
One of the four is Ady’s from last year, the other three were purchased from Indiana. They are Boer goats. The lamb is a Hampshire.
Ady’s little sister, Kenleigh, is only 3, so she’s too young for the fair this year, but she thinks goats like her sister’s Nora are “cute.”