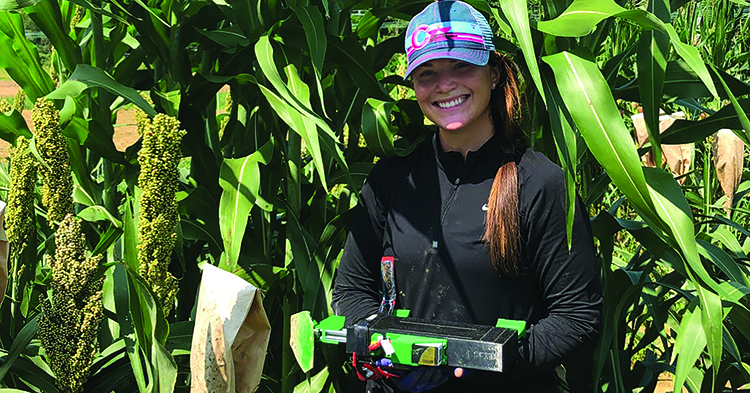 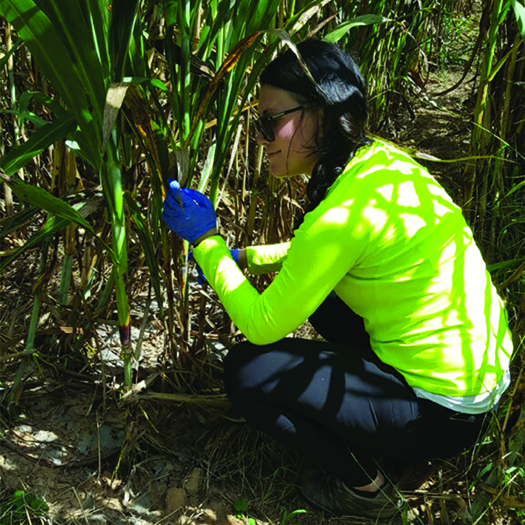 In the top photo, Ashley Hostetler holds a new device developed in the University of Delaware Sparks Lab called “SMURF,” (Sorghum and Maize Under Rotational Force), which non-destructively measures the torsional stiffness of corn and sorghum plants. In the bottom photo, she quantifies the variation in plant traits among multiple sorghum genotypes. (Photos courtesy University of Delaware)

NEWARK, Del. — Crop lodging, whereby corn breaks, buckles, or pulls out of the ground, is responsible for huge proportions of crop losses worldwide — up to 66 percent of the yield of a cereal crop like corn.
And poor harvests of maize, a major crop for both food and fuel, is not something that the Earth’s swelling population can afford to lose.
Enter brace roots, the sturdy above-ground root system that keeps maize and related crops like sorghum upright. Living up to its name, these roots brace the plant from lodging.
Teamed up with the University of Delaware’s Erin Sparks, an assistant professor of plant molecular biology, UD postdoctoral researcher Ashley Hostetler was recently lead author on two scientific papers aimed at understanding maize brace roots and how different aspects of these roots help to anchor crops.
“Right now, we have plants that aren’t able to withstand the severity or the increase of frequency of storm systems, which result in plants lodging,” Hostetler said. “The big goal of our research is to identify genotypes or the genes responsible for traits, for example, brace roots, that help plants survive in these harsh environments.”
In the first paper, which was published in Plant, Cell and Environment, the researchers identified that multiple traits are important in resisting root lodging. Researchers examined 52 different varieties of corn, measuring the variation in the brace roots contribution to plant anchorage. They also quantified nine plant traits, including brace root thickness and brace root angle.
Lodging is often difficult to study because the conditions that cause lodging (storm systems) cannot be planned for or repeated. However, the team was able to analyze brace roots up close and personal after a tropical storm hit Newark in August 2020, where UD has a 350-acre teaching and research farm. The storm caused lodging among their research plants, providing the researchers with the opportunity to show that their measurement, the brace root contribution to anchorage, is a good indicator of which plants will lodge. Throughout the study, the team developed machine learning models, which showed that multiple traits can predict plant susceptibility to root lodging and how well brace roots anchor the plant.
In the second paper, published in Annals of Botany, the research team looked at the mechanics of individual brace roots. Like an Olympic power lifting competition, they wanted to test brace roots’ strength. They looked at three genotypes to see which would win the gold, silver and bronze, respectively. The researchers examined the roots across multiple nodes (the location in the plant where the roots originate), genotypes and reproductive stages.
“When you look at roots originating from nodes closer to the ground compared to roots higher from the ground, we were able to see that (location) played a role in the structural strength and material properties of the root,” Hostetler said.
There was additional variation between genotypes.
Specifically, genotypes with stronger brace roots were also composed of materials with a higher resistance to bending. Hydration was also a factor; dry brace roots were weaker than hydrated brace roots.
“Both studies are important because often scientists, breeders or geneticists will focus on single traits — they’ll breed for one thing,” Hostetler said. “But our research shows that there are multiple traits or multiple factors like location of brace root, genotype or reproductive stage to consider when trying to choose the ‘best’ plant.”
Hostetler stressed that, with differences in soil conditions, storm systems and the amount of water received, where you’re planting matters, too. A genotype may perform well in one region, yet poorly in another. The Sparks Lab is currently working to identify which traits are most important in mitigating the effects of root lodging on crop yield.
This information could have broad importance for identifying genotypes that perform best in specific regions of the United States and across the world.
“With the publication of these recent studies, we have defined a framework to assess what makes a brace root good at its job,” Sparks said. “This allows us to understand how these roots vary in their form and function across environments, and eventually match roots to their environment.”
Hostetler became interested in agricultural research by accident. As an undergraduate, she had her eye on dental school. However, after joining a genomics lab that worked in maize and sorghum to gain undergraduate research experience, her interest in the research took off.
While pursuing her doctorate at West Virginia University, Hostetler, who was investigating the whole plant response to abiotic stress in sorghum, attended an international maize genetics conference where she listened to Sparks explain her research on brace roots. Hostetler was curious, posing several questions. Sparks recognized Hostetler’s research talent and recruited her to a postdoctoral position with the UD Department of Plant and Soil Sciences in 2020.
Now with the UD Sparks Lab, Hostetler was awarded a prestigious two-year USDA National Institute of Food and Agriculture Postdoctoral Fellowship. Dedicated to studying root lodging, she’ll use the funding to investigate sorghum — another important cereal crop.
Sorghum is emerging as an alternative cereal crop due to its resilience in harsh environments.
But like corn, sorghum suffers from significant lodging which impacts efficient production. Hostetler will extend her work from maize to analyze traits key to root lodging resistance in sorghum, and identify the shared genetic basis of these traits.
Taking the research a step further, she hopes to identify how the function and development of these traits is impacted in response to salt stress. Salt tolerance in crops is particularly relevant in Delaware. The rising sea-level is causing saltwater intrusion, which is limiting the land area where farmers can grow crops.
“In environments with saltier soils, are these brace roots performing as well as they were in an area where there were not salty soils?” Hostetler said. “Storm systems are causing more root lodging, but they are also causing changes in stressors like salt and drought.”