(Editor’s note: Brenna Ellison is an associate professor in the University of Illinois’s Department of Agricultural and Consumer Economics. Melissa Ocepek is an assistant professor in the univeristy’s School of Information Sciences. This article first appeared on farmdoc Daily on Oct. 29.)

The COVID-19 pandemic has changed many of consumers’ everyday behaviors, including how they get food.
The extent to which an individual’s behavior changes is likely dependent on many factors. In this article, we’ll explore how geographic region and political affiliation may be associated with differences in food acquisition behaviors.
The geographic region in which an individual lives can impact food acquisition options based on how that region is choosing to operate during the pandemic — in particular, how restaurants are allowed to operate (e.g., restrictions on indoor dining, capacity constraints). 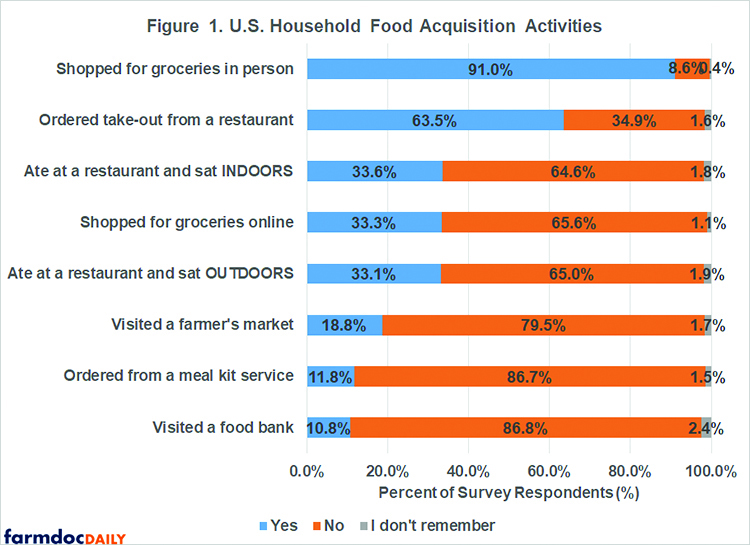 In addition, the prevalence of COVID-19 cases in a region is also likely to influence the food acquisition activities in which consumers are willing to engage.
Political affiliation may also influence food acquisition behaviors given the increasingly sharp divide among political leaders on the extent to which Americans need to take precautions to help slow the spread of the virus.
In the current political environment, if COVID-19 has evolved into a partisan issue, households with different political ideologies may be more or less willing to engage in certain food acquisition activities.
Survey Design and Sample Characteristics
To investigate household food acquisition behaviors, we conducted an online survey with approximately 1,000 U.S. consumers in mid-September, 2020.
Our sample was recruited to be representative of the U.S. population in terms of gender, age, income, and geographic region.
In addition, to be included in the sample, respondents had to do at least 50 percent of the grocery shopping for their household to ensure each person had a primary role in food acquisition decisions in their household.
Our primary question of interest is: “In the last 14 days, have you completed any of the following activities?” The food acquisition activities that we asked consumers about were:
• Shopped for groceries in person;
• Shopped for groceries online;
• Ordered from a meal kit service (e.g., Blue Apron, Hello Fresh);
• Ordered take-out from a restaurant;
• Ate at a restaurant and sat indoors;
• Ate at a restaurant and sat outdoors;
• Visited a food bank; and
• Visited a farmer’s market.
For each activity, respondents could indicate “Yes,” “No” or “I don’t remember.”
Food Acquisition Activities
across All Households
Figure 1 shows the extent to which U.S. households engaged in each food acquisition activity in the last two weeks (which would be approximately the first two weeks of September this year).
The results from Figure 1 suggest that, generally speaking, consumers are following the guidance of public health officials, sticking to essential food acquisition activities (grocery shopping) and limiting in-person dining at restaurants (indoor and outdoor), opting for take-out instead. 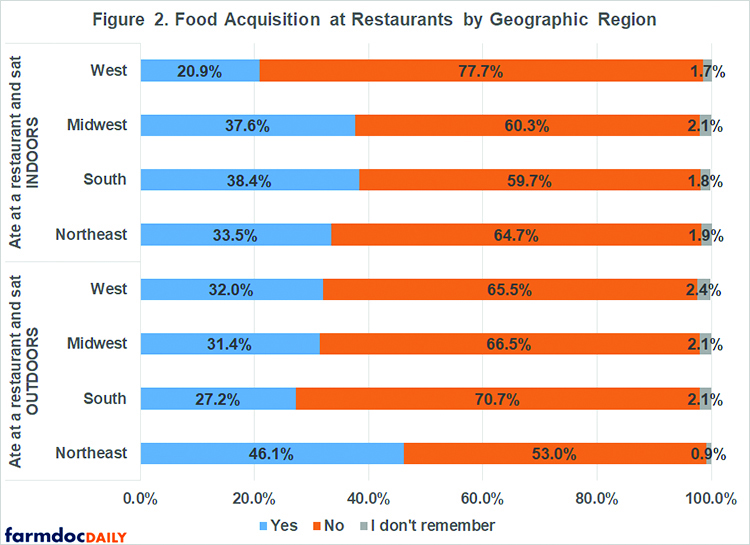 These results are in line with those reported by an industry survey on dining out behavior during the pandemic (Sanchez, 2020).
One thing we do not know from the survey is the frequency that consumers performed each activity during the two-week period.
Zagat (2018) reported that consumers ate out 5.9 times per week (including take-out) in 2018. Sanchez (2020) reported that consumers are ordering take-out 2.4 times per week during the pandemic.
Given the low proportions of people who reported eating at a restaurant indoors or outdoors, it appears unlikely that consumers are eating out at pre-COVID levels.
This conclusion is also supported by data on food spending (Ellison et al., 2020) and restaurant closures during the pandemic (Sundaram, 2020).
When we compare food acquisition activities by geographic region (following the U.S. Census, we use four regions: Northeast, South, Midwest and West), the biggest differences in food acquisition behavior relate to dining at restaurants (see Figure 2, right).
For indoor dining, the larger proportions of consumers in the South and Midwest regions (38.4 percent and 37.6 percent, respectively) reported they had done this in the last two weeks.
In contrast, only 20.9 percent of consumers in the West region reported eating indoors during the same period. For eating outdoors, we found that the Northeast region had the largest share of diners (46.1 percent) who engaged in this activity in the last two weeks.
Weather variation could partially explain some of the differences we see in restaurant dining behavior. In the South and Midwest, the temperatures were likely still quite warm during the data collection period, which may drive more consumers to eat indoors.
Alternatively, with outdoor dining, the Northeast region was likely experiencing cooler temperatures, which may have influenced the number of people who wanted to dine outside.
It is also important to note that states in the Northeast region were experiencing much lower rates of COVID-19 during the survey period (and the two weeks prior), which could also lead to more consumers feeling comfortable engaging in outdoor dining relative to other regions (The New York Times, 2020).
Outside of restaurant dining activity, we found that consumers in the South were more likely to shop for groceries online relative to other regions (39.6 percent in the South reported doing this in the last two week versus 32 percent, 28.8 percent, and 27.2 percent in the Midwest, Northeast, and West, respectively).
Further, consumers in the South were more likely to visit a food bank during the last two weeks (15.3 percent reported doing this) relative to other regions.
For data analysis purposes, we group consumers into three categories for political affiliation: Republicans, Democrats, and Independents. In our survey, there were additional response options for “Other” and “No Preference,” but few respondents selected these options, so we grouped individuals who selected these categories in the Independents category. 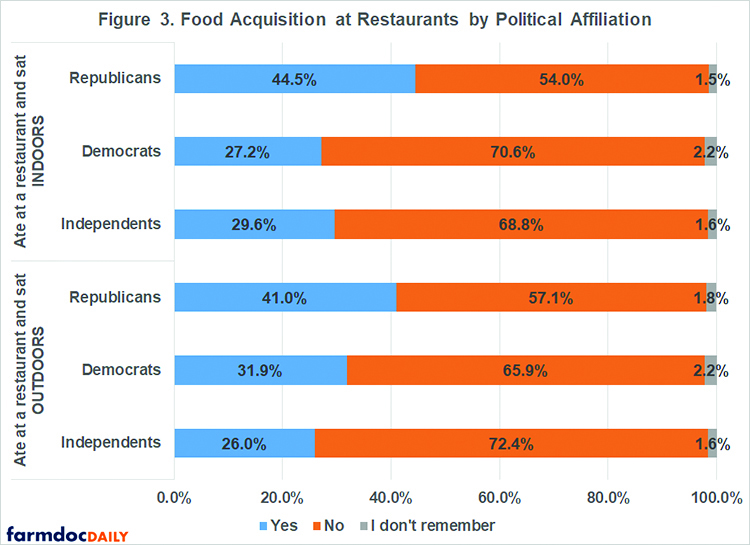 When we compare food acquisition activities by political affiliation, the only significant differences we see in acquisition behaviors relate to restaurant dining behavior. Figure 3, right, summarizes our results.
For both indoor and outdoor dining, a greater share of Republicans indicated that they engaged in these activities in the last two weeks relative to Democrats and Independents.
This result does not appear to be driven by any particular geographic region.
The share of Republicans who reported engaging in each of these activities was greater than the shares for Democrats and Independents in each of the four regions.
These results may provide one indication that the pandemic has evolved into a partisan issue, or that it is evolving into one, though it is difficult to draw definitive conclusions from one sample at one point in time.
The COVID-19 pandemic continues to have a clear impact on how households acquire food.
Broadly, we find that consumers continue to shop for groceries in person, but dining at restaurants (indoors or outdoors) does not seem to be an activity that the majority of consumers are engaging in right now.
There are some differences in food acquisition behaviors by geographic region and political affiliation, particularly when it comes to restaurant dining behavior.