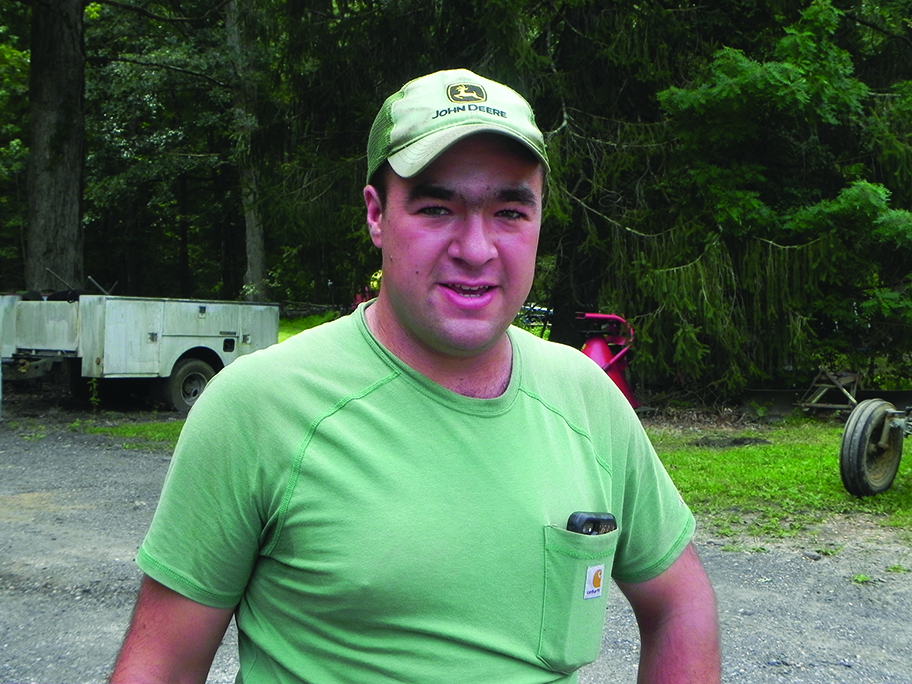 Hyland credits his father and mother and the Hom Brothers at nearby Sun Sang Farm for getting him started. (Photo by Richard Skelly)

MILLSTONE TOWNSHIP — Jay Hyland, 23, discovered farming and FFA programs in Allentown public schools as a young teen and never looked back.
He attended Mercer County Community College in West Windsor for a year, majoring in plant science, but the strain of farming responsibilities and dealing with the death of his father, Jay H. Hyland, at 61 led him to take a break from college.
“After my father passed away in the winter of 2016-17, I cleared and built this lot over here for a [retail] farm stand,” Hyland said at his vegetable farm, where he grows a wide range of crops on 22 tillable acres. Plenty of good farmers are in this general neighborhood, and they all work together and help each other out, Hyland said.
Shortly after making the decision to raise vegetables and some fruit for much of his living, he started in July, 2019 working at the nearby Rutgers Fruit and Ornamental Research Extension farm and center in Cream Ridge.
Hyland credits his father and mother and the Hom Brothers at nearby Sun Sang Farm for getting him started.
“They all got me going in high school with farming, and I started working with the Hom brothers my freshman year of high school,” he recalled.
The Homs used to grow Chinese vegetables at their farm but now focus their efforts on soybeans and rye grasses.
“I can’t say anything but nice things about the Homs. Anytime I have a problem, they’ve always helped me along.”
The amount of acreage devoted to raising vegetables at Hyland Farms off Windsor Perrineville Road kept growing.
“I graduated Allentown High School in 2015 and later that year, right before Christmas, my father, found out he had esophageal cancer,” Hyland said.
His father, who had always farmed part-time and worked with the Hluchy brothers in Monroe at Tidbury Creek, died in May 2016.
Jay H. Hyland was a command pilot in the Air Force during Operation Desert Storm and then worked for the Air National Guard out of nearby McGuire Air Force Base.
His mother Rita and his sister Heidi help him out with his retail and wholesale operations as much as they can.
Both of them work at the Department of Military and Veterans Affairs in Lawrenceville.
He also credited two longtime friends who and good mechanics, Alden and Caleb Brown of New Egypt.
Jay Hyland said the pace has picked up in the last year, so much so that his retail farm stand is much busier thanks to good signage and a Facebook page with regular updates, and he’s bringing extra produce over to Tri-County Cooperative in Hightstown each week.
Hyland was candid about his failures and successes.
“Most of what I’ve learned I’ve learned from experience, from being around it all the time because my father was always farming part-time. Every year, you have something that’s a failure, you have to stay diverse,” he said.
“You diversify, you learn what works, what doesn’t work, and you see how you can change your mode of action a little bit for next year.
“My tomatoes this year are probably the nicest looking tomatoes I’ve ever grown, and did I do anything different with them this year? No, you just have to work with the weather. Eggplant weren’t so great this year, and it seems like if you keep everything diverse, something tends to pan out,” Hyland said.
“The thing with farming is you’ve got to like it,” he argued, “it has its own rewards, and at the end of a long day, you do feel better.”
“I’ve seen a lot of these old timers go out of business because the kids don’t want to continue the legacy, and we’re talking multiple generations to build this empire to get it to where it is,” he said. “Farming helps you develop a different perspective on things and a different appreciation for things, like what it takes to get a tomato on your table. You get a totally different perspective on it.
“Most people take it for granted and that’s a shame.”