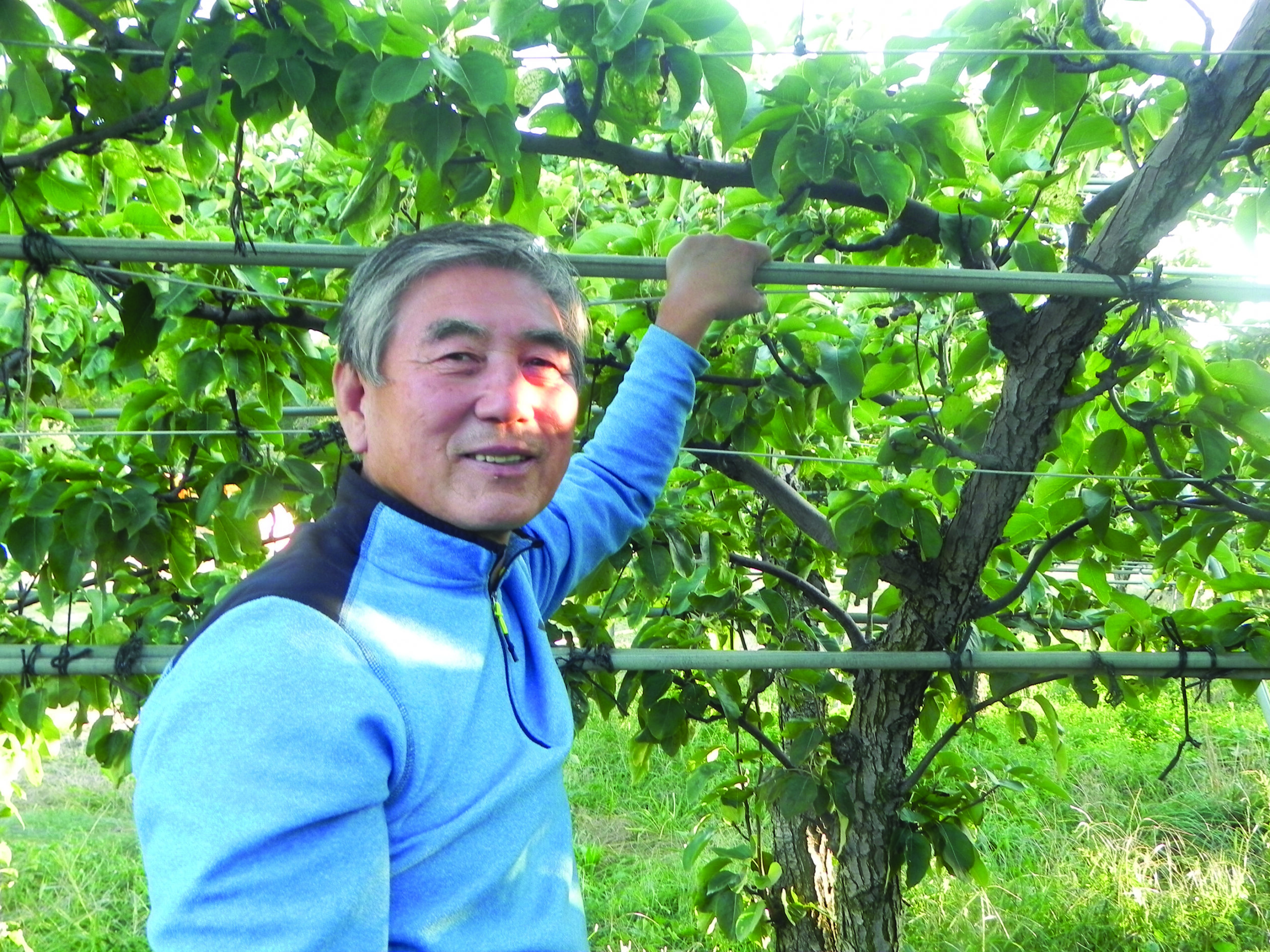 After two attemps on other farms, Chong Kim established an Asian pear orchard and other fruit and vegetable production at Evergreen Farm in Yardville, N.J. (Photo by Richard Skelly)

YARDVILLE, N.J. — If they are to succeed, veteran farmers know that perseverance is an essential character trait for success.
That’s true for Mercer County, N.J. fruit and vegetable grower Chong Kim.
Along with his wife, Sunyi, and a sizeable crew, they manage two massive fruit and vegetable growing operations in Hamilton and Southampton townships.
Kim was raised an hour south of Seoul. His father had an Asian pear orchard. He said he yearned for the sweet taste of the singo Asian pears and other fruits and vegetables from his homeland.
His first attempt was at a farm in Middletown, N.Y., about an hour north from where he was living in Queens, working in clothing shops and driving a cab. That climate proved too cold, Kim said through interpreter and farm manager Kevin Chang.
Then they found land in Shamong Township off Route 206 in Burlington County, and while the climate was better, that attempt was mostly a disaster, too he said.
The third time was the charm for Evergreen Farm in Hamilton, where he raises Korean apples, Asian pears, black beans, and Concord and muscat grapes. Their son, Sung, is a medical doctor in private practice in North Jersey.
At the farm’s main retail location in the Yardville section of Hamilton Township, he ordered a system of trellises to hold up his pear trees, so they wouldn’t be damaged in high winds and to make harvesting easier and safer.
Normally this time of year, September and October, there would be busloads of people coming in for you-pick Asian pears, but weather events, including April freezes and the August tropical storm put a damper on that. Fortunately, they have some Asian pears saved in climate-controlled refrigeration units from last year’s harvest.
Their farm store and part of their processing operations are situated on 140 acres in Hamilton, part of which borders on the New Jersey Turnpike. A green sign on the Turnpike fence says “Evergreen Farm,” and a few rows back from the fence are rows of pear tree and apple tree trellises.
Kim and his wife moved from South Korea to Queens in 1984. He said he searched all over New York City but could find no singo Asian pears. Eventually he decided he’d have to grow them himself.
“He was doing a lot of business back and forth between here and South Korea,” Chang said. “He spent eight years in Shamong, but couldn’t figure out why his trees were dying.”
“I don’t know America, so I ask around,” Kim said, and he asked local and federal agricultural agencies why the pears were dying, but no one in these offices had much knowledge of Asian pears.
A deer problem in Shamong wiped that farm out, but in 1998, with the plan for a trellis system, Kim found his current site in Hamilton Township and began assembling trellises shipped from South Korea.
“We give up, no more farming,” Kim said.
Kim’s son, Sung, picked up English quickly in his youth and the family soon discovered the problem was an airborne bacteria common in New Jersey and Mid-Atlantic apple orchards in summer, Eastern fire blight.
“Agricultural professors in Pennsylvania told him Asian pears are too sensitive to grow here,” Chang said. The fire blight that was affecting his apple tree was also affecting his neat rows of Asian pears.
“America has fire blight! I didn’t know! First time I ever hear of it, it is bacteria and floats in air. All the trees can die,” Kim said, waving his arms to add emphasis. While there is no cure for Eastern fire blight, most apple farmers controls the disease by carefully pruning the browned leaves and sprigs from their trees during high humidity growing seasons.
“Then we learn, then we learn,” Kim said, “it is worse than Coronavirus for trees!”
The Kims, Chang and the rest of their crew produce grape juice, pear juice from their fruit and also grow a range of Korean and Asian peppers at the Yardville location and another 250-acre location in Southampton.
Whole Foods, Fresh Direct and smaller produce dealers around the Mid-Atlantic states buy from him.
Evergreen Farm also has a significant retail business, which he said draws ethnic populations from all over the East coast.
This year, August’s tropical storm and a few repeated cold snaps in April wiped out the you-pick Asian pair component of the business, but there are plenty of off-the-beaten-path fruits and vegetables for farm market patrons: sticky corn, jujube juices, gongura and bitter ball.
Holding up a green Korean grape, a smiling Kim says: “American people, one time, taste it, they love it!”
Evergreen also grows a lot of dates, soybeans, black beans and sweet potatoes.