BRISTOW, Va. — Even before last year’s early August announcement that the Mid-Atlantic Nursery Trade Show was moving from an in-person to a virtual event for 2021, Matt Deivert knew he needed to do something different for his companies’ exhibit booth.
“Our booth just felt very static and didn’t seem tell much of a story,” said Deivert, a principal for both South Riding Nurseries, a wholesale provider of landscape products and services, and White House Natives, a wholesale grower of native Virginia plant materials in Luray. 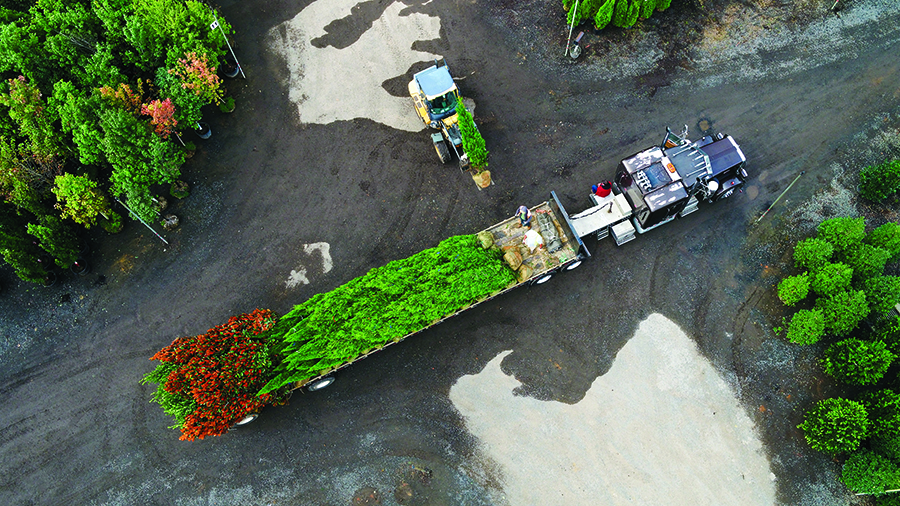 Shown from overhead, staffers at South Riding Nurseries load up a customer’s order on a flatbed trailer showcasing the expansive aisles available at its facility in Bristow, Va. (Photos courtesy Kirk Floyd)

“We’d been talking about doing videos for the booth,” he continued, “because we wanted something where even casual passersby would catch a snippet of our story. When MANTS announced it was going virtual, that really pushed us to get off our butt and do it.”
Although this is only their fourth year exhibiting at MANTS, Deivert has been attending the show for much of the 30 years he’s been in the green industry; and, he saw the videos as “an opportunity to tell folks who we are.”
“Profiles are just words,” he explained. “Videos have more value because their visuals give your customer that much more information.”
In fact, “any type of video is always beneficial,” agreed Katie Watson, e-commerce specialist for The Perennial Farm in Glen Arm, Md. “If your customer can’t be there, they like to see what you’re doing.”
With the constraints of social distancing present throughout most of 2020, the year’s circumstances “demonstrated that we needed to alter how we engaged with our customers,” Watson continued.
Toward that end, The Perennial Farm counted itself lucky that they had engaged Kirk Floyd, owner of kdrone Services, to film inside their greenhouses during the early months of 2020.
“Kirk has a lot of green industry experience,” she explained. “So, he understands how to shoot the angles of plants instead of someone who just owns a drone and wants to take pictures and videos.”
“You want a product that matches the expectations of the show,” agreed Deivert, who also hired Floyd to help film and produce the videos they placed on their companies’ profile in the MANTS Business Hub.
Deivert acknowledged that he had played around a little bit with videos by hobby drone people. MANTS, however, is “a top-level premium show,” and the last thing he wanted was “to put a video product out there that would take away from the message.”
Deivert pointed out that too many growers try to save money by doing their own flyover of their nursery, which not only “gets really boring really fast,” but also “doesn’t capture the business’ service aspect, a very important part of the story.”
In contrast, using a professional like Floyd who has “a lot of industry knowledge, makes it easier to get what you need. He has such a great background in the industry that he provided a lot of insight into what we should be filming to tell the story the way we wanted,” Deivert said.
Watson added that the good response The Perennial Farm received when they posted their videos, helped them realize that they should try to do more rather than less video. “Having a professional drone camera gave our customers a better idea of what was available and an opportunity to see our whole production,” said Watson.
“Our front entrance is deceiving,” Watson continued, “because it opens up to more than 50 acres of growing space. Having a professional like Kirk come in gave us an opportunity to showcase how much area we have to grow our product, aerial shots of our new building and even our fleet of trucks.”
Added Deivert, “As someone who’s been in this business for 30 years, we’re really good nursery people, but not necessarily good marketing people or good film production people. That’s why finding someone like Kirk, a professional with industry knowledge, makes it easier to tell your story and create the brand awareness you’re looking for.”