It takes TikTok to keep up with Jones 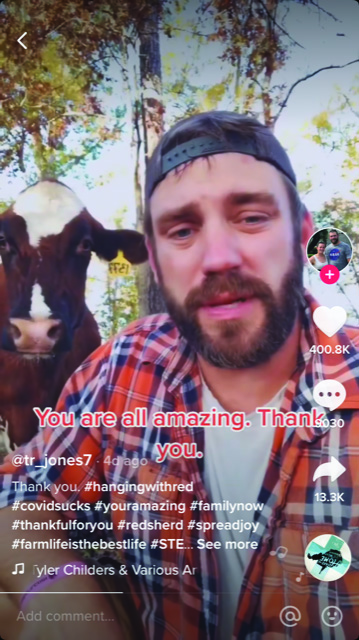 BLACKSTONE, Va. — Thomas Jones and his family recently invested $2 million in a new creamery on their dairy farm, but the past year has been difficult. They struggled with a barn collapse, and the coronavirus has been a source of great stress.

About a month ago, things began to improve. Customers flooded the farm to buy Richlands Dairy and Creamery’s milk, ice cream and other menu items, including BBQ sandwiches and meatloaf. The parking lot, he said, was full.

So four weeks ago, Jones, the farm’s manager, opened the app TikTok on his cell phone and uploaded a quick video thanking those who he said were responsible for the farm’s turnaround: his TikTok followers. As of last week, there were nearly 300,000 of them.

“All day people have been waiting in line to get ice cream,” a bearded Jones said in a backwards cap and flannel shirt, pointing to the creamery. “All day the hayrides have been full, and y’all did that, and for the first time in months we have some hope again.”

Jones’s TikTok videos have been “liked” by users 2.5 million times. If you assumed he’s been doing this for years, you’re forgiven.

He posted his first video to the app, on a whim, in June.

“We work these 12- to 14-hour days. We have very little time to leave the farm and talk to people,” he said. “I started making videos as therapy.”

He’s one of growing number of farmers who have joined TikTok, a massive and viral video app that allows users to edit and upload snappy, short-form videos with the latest video filters and music. More than 700 million people across the planet downloaded the app in 2019 alone, according to Statista, a marketing and consumer data company.

Nearly 40 percent of its users are teenagers. ByteDance, a Beijing-based Internet technology company, created the app in 2016 and made it available for download internationally the following year.

Now some farmers are adding the app to their portfolio of social media accounts. For farmers with something to sell directly to consumers, it can be a great way to build an audience fast. But be forewarned: TikTok users like a good performance, said Don Schindler, senior vice president of digital initiatives at Dairy Management Inc., a national dairy trade association.

“It’s definitely a platform for a younger generation. You’ve got to be very entertaining on it,” he said. “You can’t just preach to them. … They flip through the videos quickly and you only get a few seconds to get their attention.”

Jones improvises goofy, one-way conversations with his dairy cow, Red. He recently joked about an oversized, oddly-shaped sweet potato harvested from the farm. He even answered a popular question from followers as to whether his family, which has owned the farm for nearly 300 years, ever owned slaves. (After some research, Jones learned, with relief, they had not.)

“He’s got quite a big following,” Schindler said. “He’s definitely got a style to his posts.”

Many people on TikTok — so-called “influencers” often with millions of followers — make significant incomes working with brands to feature products and services in their videos. Some farmers have caught onto this trend as well, Schindler said. Jones isn’t working with any brands yet, but after several of his videos went viral, he’s had a bit of interest. Nearby residents have also discovered his farm on the app and promised to visit.

When he challenged his followers last month to “tag” — or notify — their favorite TikTok creators on one of his recent videos as part of an ice cream giveaway, five of those creators turned out to be people with a combined audience of more than 30 million users. When those creators liked Jones’s video, many of their followers saw as well. The video got 100,00 views in 90 minutes. His number of followers rose from 88,000 to 220,000 in six days and kept rising.

“By the time this phone call’s over, it’ll probably be up another 2,000,” he said during a phone interview.

Flustered, he had to quickly scale back his ice cream offer.

TikTok users, like most of most of the country, are so far removed from agriculture that farmers can seem exotic, Schindler said. Attractive or funny videos of a cow or a grain combine or a chicken coop can quickly attract eyeballs. He chuckled at the memory of a recent video where one TikTok user mistook a dairy cow for a dog.

“They don’t see these things all the time,” he said. “People will pay attention because of cows”.

Farmers on the app have two things going for them, he said: There aren’t many farmers on it yet, so there are opportunities to stand out, and the site hasn’t been oversaturated with advertisers and marketers like Facebook and other social media outlets. Schindler pointed to several users, including nyfarmgirls, three sisters from upstate New York who built a TikTok following of several hundred thousand users with videos of them on the family farm and parlayed that into an apparel brand, selling T-shifts, baseball caps, jackets and other clothing online. On their Instagram page, they say they’re “3 sisters AGvocating & changing the future of Ag.”

Farmers shouldn’t necessarily expect theirs or Jones’s results, however. Several regional farmers had followings of just a handful or a few thousand followers.
Jones said he still struggles to figure out what kind of video will entertain users and get picked up and promoted by the app’s increasingly choosy algorithm. But humor isn’t always necessary, he said.

Sometimes, he finds, preaching works too.

“If I’m going through something emotional I will turn on my TikTok and record it,” he said. “That’s what the ‘frustration’ video was. I was literally frustrated out of my mind. People responded because they could see in that one minute how much is at risk and how frustrated I am, but it’s just not reaching anybody.”