Kaolin clay may serve as sunblock for tomatoes 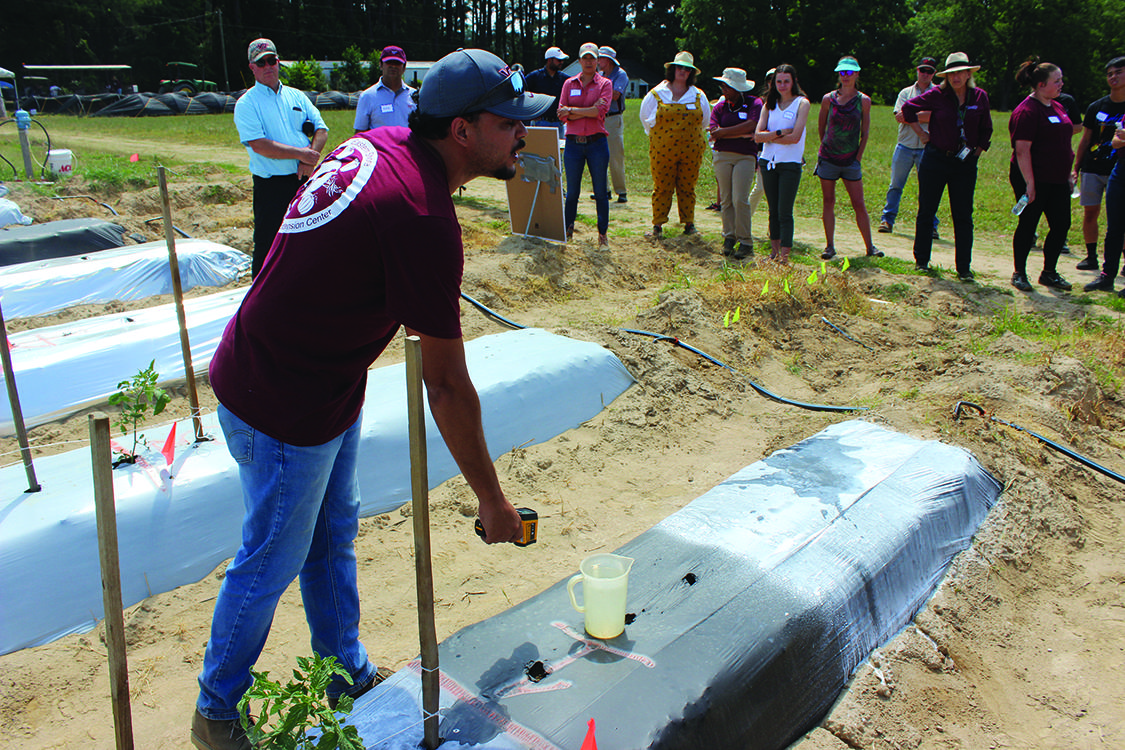 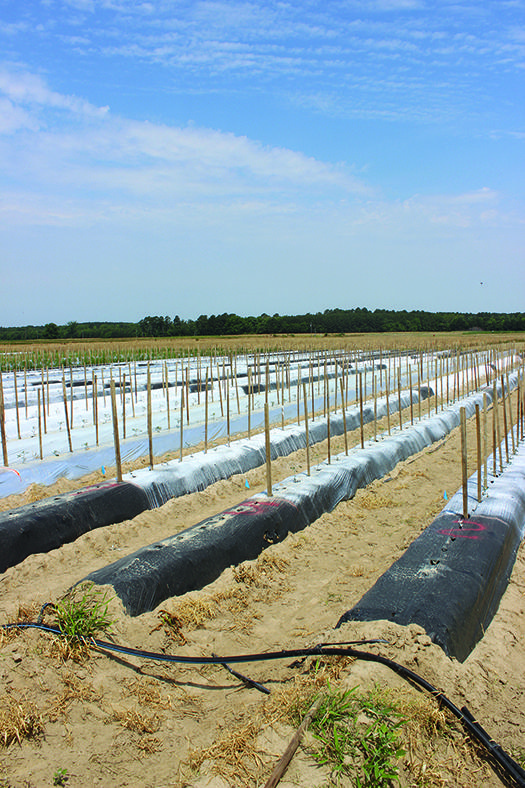 This year, the kaolin clay trial is testing rates of 20, 40 and 60 pounds per acre applied at planting and some replications received an second application at four weeks from planting and some will receive a third application at eight weeks at planting. In top photo, Ricardo Gandini, a Virginia Tech graduate student at the Eastern Shore Agriculture Research and Education Center, shows the temperature differences between plain black plastic and black plastic sprayed with a kaolin clay solution. (Photos by Sean Clougherty)

PAINTER, Va. — Tomatoes need sun and heat to grow, but too much of either or both can hurt production. Like people heading to the beach this summer, tomatoes, especially in plasticulture systems need some type of sunblock, too.
Plastic mulch for tomatoes is nearly ubiquitous on vegetable farms as a system to reduce weeds, manage soil temperature and hold moisture in the soil.
But, the researchers added, black plastic can overheat the soil in late summer and reduce productivity.
So Ricardo Gandini, a Virginia Tech graduate student working at the Eastern Shore Agriculture Research and Education Center started a trial last year studying the use of kaolin clay as a much cheaper alternative.
Silver colored plastic mulch has emerged as the leader in heat management as it reflects the most light, but Gandini said the cost is more than twice that of standard black plastic mulch and has become increasingly difficult to acquire.
Kaolin clay is an inert organic compound that has proven to be effective in reducing heat stress on plant tissue, Gandini said at the center’s June 22 vegetable and potato field day, but it’s not clear how it compares to silver or white plastic mulch when applied in solution to black plastic.
In the first year, Gandini compared the clay’s use to black, silver and white plastic beds. He applied the clay solution at 20,30 and 40 pounds per acre and some replications got a second application.
Gandini said while the silver mulch emerged with the highest marketable yield in the study’s first year, the clay-applied plastic treatment had a slightly better marketable yield than the black plastic control and average fruit weight was near that of the silver mulch and about 50 grams more per fruit than the black plastic group.
The yield in the treatment using the 20 pounds per acre rate was as good as the higher rates regardless of the number of applications.
Gandini added that clay coverage on the plastic was reduced over time by rainfall — so this year, he is studying the effectiveness of adding a spray adjuvant to make it stay on the plastic longer.
This year, Gandini is testing rates of 20, 40 and 60 pounds per acre applied at planting and some replications received an second application at four weeks from planting and some will receive a third application at eight weeks at planting.