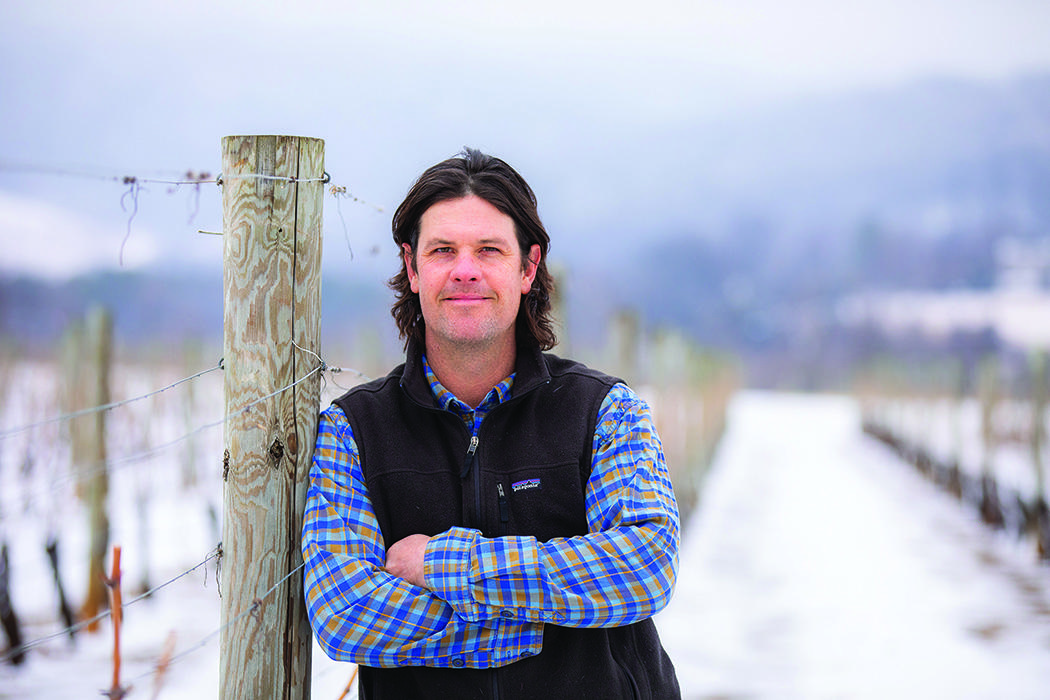 Under Carrington King’s management, King Family Vineyards has expanded to 50 acres, including 20 acres on an adjacent property that he also manages full-time. A producer of award-winning wines, King Family Vineyards has been included in the Virginia Governor’s Cup Case, which showcases the commonwealth’s best wines, in seven of the past nine years. (Photo courtesy Jack Looney)

CROZET, Va. — Carrington King, vineyard manager and co-owner of King Family Vineyards, has been named Grower of the Year by the Virginia Vineyards Association.
“Virginia is one of the most dynamic wine-producing states in the U.S., with more than 28 varieties of grapes planted on more than 4,000 acres in the Commonwealth. Carrington King exemplifies the spirit that is bringing Virginia to the forefront of the American wine industry,” Virginia Secretary of Agriculture and Forestry Bettina Ring said in presenting the award. “Over the course of more than two decades, he has overseen the growth of King Family into one of the Commonwealth’s largest vineyard operations.”
Under King’s management, King Family Vineyards has expanded to 50 acres, including 20 acres on an adjacent property that he also manages full-time.
A producer of award-winning wines, King Family Vineyards has been included in the Virginia Governor’s Cup Case, which showcases the Commonwealth’s best wines, in seven of the past nine years.
“Carrington is one of the most experienced and professional vineyard managers in Virginia,” said Skip Causey, who has assumed office as the VVA’s new president. “He’s been a leader in handling the challenges of weather, employing helicopters and wind machines, for example, to protect his vines from late spring frosts.”
King has worked at King Family Vineyards since its founding in 1998, helping to plant eight acres of Merlot and Viognier vines while he was still in high school.
“We ordered the vines when I was 18 years old, and I was 19 by the time we started planting,” King said. “During the fall, I would come home from college on the weekends to work in the vineyard. And back then, we did everything by hand — all the leaf pulling, all the hedging, and all the canopy management. We didn’t use grow tubes. We trained every vine by hand.”
King said he learned valuable lessons about managing a vineyard from his father, the late David L. King, who was a prominent force in the Virginia wine industry.
“He was always about doing the work and getting out there and being a leader,” King said. “Don’t go sitting in the house and direct people from there. Get out there, and do the work with them, and they’ll be inspired to treat the ground and the vineyard like it’s their own.”
King said the vineyard and winery are truly a family operation.
“This is a team effort every single day. My brothers, James and Stuart, have been with me every step of the way, so this is very much a shared honor,” King said.
In addition to the Merlot and Viognier that made up the initial planting, King Family Vineyards now grows Chardonnay, Cabernet Franc, Petit Verdot, Petit Manseng, and Malbec.
King, a former member of the VVA Board, continues to serve Virginia growers by participating in the Legislative Collective, which represents the interests of the Commonwealth’s vineyards and wineries.
King graduated from the University of Maryland in 2002 with a degree in horticulture, and lives in Crozet with his wife, Corie, and their three daughters.
King, who played lacrosse in high school and college, coaches youth lacrosse teams in Charlottesville.