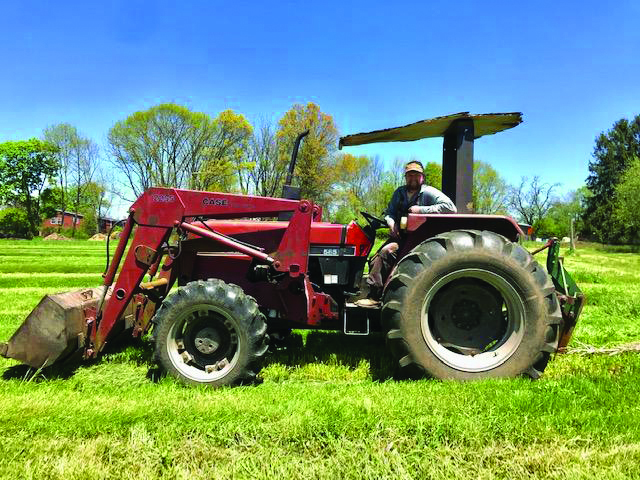 LIBERTY CORNER — Jon Knox, 35, had an introduction to farming early in life — in his backyard.
“His mom had a one-acre, little garden plot,” said his wife Kim. “She used to can and jar everything. Growing up, he had tractors.
“He said he didn’t grow up on a farm. Well, I grew up in Chicago; we had a few tomato plants,” she laughed.
The Knoxes of Dogwood Farms rent and farm 10 of 50 total acres of land at 270-year-old English Farm.
All of the farmland was Certified Organic before the Knoxes arrived, so it met their needs.
“We were able to transition without any down time,” said Jon.
The couple met in college at the University of Colorado. He was an International Affairs and Philosophy major, and he interned at the United Nations.
Realizing that he didn’t want to be an office guy, he returned to Boulder, and got a farm job that lasted for five summers. He learning the organic end of the farming business in a very similar vegetable operation to one he and Kim now run, including retail and CSA. The rest is history.
“We started Dogwood Farms in 2012,” says Kim, also 35. Both were 27 at the time. “A rare thing,” says Kim, who has a background in Education, “we still fall in the young farmer bracket.”
Dogwood Farm has since stopped its CSA program and focused on its on-farm store and young delivery business.
The enclosed retail space inside a barn has been big.
The couple had previously at their other location operated out of a 10-by-16-foot shed.
Their current site is even a historical building.
“We also found,” John said, “that a real focus for our business is taking our high quality, organic ingredients, and rather than putting them out for fresh sale and wasting with all the shrinkage of fresh produce, is making a value added product.”
It does so by partnerships with local vendors.
“So, a big growth area for our farm that we are really focused on started with the pasta sauces and the salsa, the jarred tomato products, that we could only kind of do in the summer to now year-round.
“We’re doing pestos through the winter with winter greens, we do raviolis here year-round between the pork with the animals we raise, to pumpkins.”
“Whatever’s in season,” interjects Kim with a smile.
Dogwood Farms is open year-round, and sheep, chickens, and pigs roam their section of the grounds.
Organically grown are tomatoes, peppers, beans, corn, cucumbers, zucchini, and greens like squash.
“We started this from a nothing!” says Kim, happily. “The fields (at their initial locations) weren’t certified organic yet.”
The couple took money from their wedding gift and, with additional help from a USDA FSA Beginning Farmer Program loan as well, opened for business.
Dogwood Farms was originally located near the Duke Farms Visitors Center in Hillsborough, and afterwards from 2015 to 2017 moved to another more isolated location at the property.
Then the English Farm acres were available, and the Somerville couple recognized a great opportunity to keep growing.
Not relying alone on farm store sales during COVID19, the couple launched a delivery business by demand on March 17, and their name spread. They said that business has been great.
Even during the height of the pandemic, Dogwood Farms was forced to hire more staff.
“We’ve been busier than ever,” said Kim, “and we’re just so grateful we can provide the service to a larger scale group of people. What happened with the delivery, we got our farm’s name out.
“We’re spread out so much more in New Jersey and our name was able to get out in such a larger scale with the delivery service. So, we’re just very grateful for that.”
Jon and Kim have two children. Virginia is 5, and Charles is almost 2. Rita the dog is farm mascot.
“It’s a little wild and crazy at our house,” Kim says with a laugh. “And throw in the business, it’s a little crazy.”
You can’t beat the endless greenery view from the farm store. “And it gets better as you go up,” Jon said.
“Oh, the sunrises,” says Kim.
“And we just learned that Washington’s troops camped out at this farm. How cool is that?” added Jon.