Kyles ready to scare up business this fall 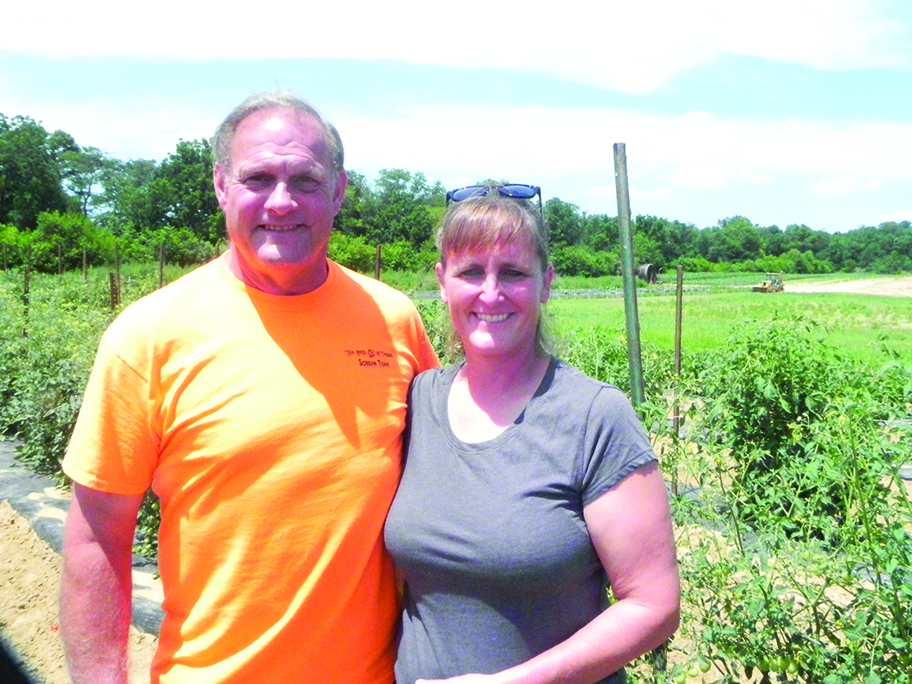 While their farming venture goes back to 1988 as K&S Farms, shortly after Kevin and Sharon Kyle were married, they changed the name earlier this year since their children are all involved in differing capacities. (Photo by Richard Skelly)

EAST WINDSOR — Being resourceful farmers, Kevin and Sharon Kyle know the value of making hay while the sun shines.
During the season, on weekends, Kevin Kyle mans a booth he has run at Englishtown Auction since he was 16, while his wife Sharon handles customers back at their Kyle Family Farm on Windsor-Perrineville Road.
Their 252-acre spread is known in the fall months for its Halloween agritourism activities including the “Field of Terror,” which has attracted visitors from all over the world.
Sharon, Kevin, their children and a small staff keep the farm humming along from spring planting through harvesting in the fall.
“Depending on the year, we do anywhere between 30 and 50 acres of mixed vegetables with pumpkins and sweet corn,” Kevin said.
Their crops include anywhere from 3 to 10 acres of pumpkins for use in the fall with their agritourism activities, and always a lot of sweet corn.
They also grow tomatoes, cauliflower, cabbage, asparagus, beans, broccoli, carrots, cucumbers, eggplant, garlic, peppers, lettuce, onions, radishes, scallions, squash and potatoes.
Kevin met Sharon shortly after he began his produce operation at Englishtown Auction.
She was still in school at Rutgers University when they got married. She graduated from Rutgers University in 1991 with a degree in agricultural science.
“In high school, my mom said to me, ‘If you want to farm, do whatever you want to do,’” Sharon said. “‘But I want you to have an education. What if something happens to your husband? Promise me you’ll finish school,’ and I said, ‘Fine, it’s important to me, too.’”
Sharon was raised on a farm and both her parents are still active farmers.
Her father, James Krajcsovics, 79, runs the Krackerjack Farm on Route 33 with a bustling roadside stand during the growing season. Her father works with her brother, also named James.
Her mother, Irene, handles much of the farm’s paperwork.
“My father taught us everything we know and the work ethic we have,” Sharon said in a big converted barn before their Sunday drive-thru operations commenced.
“They call it Krackerjack Farm because, years ago, that’s what they called my grandfather, they couldn’t pronounce his last name.
Raised in Monroe Township, Middlesex County, Kevin gave up a full scholarship for trumpet playing at a college in Virginia to pursue his dream of being a farmer.
“My mom was a Rutgers grad and my dad didn’t go to college. They told me I was crazy not to go to college,” he explained during a hot Saturday morning in between customers at always-busy Englishtown.
While he’s over at Englishtown, Sharon and their children team to help load cars for a drive-through CSA program they started this year, with support from East Windsor Township officials.
Kyle began working with his uncle, Earl Stillwell, when he was 9 and began working with the Byrnes brothers handling straw when he was 12. He said he’s now in his 40th year selling produce at Englishtown.
While their farming venture goes back to 1988 as K&S Farms, shortly after he and Sharon married, earlier this year they changed the name and added extensive signage on Windsor Perrineville Road.
The new name is Kyle Family Farm, since their children, Patrick, Kathleen and Amanda, are all involved in differing capacities.
“We’ve been doing Englishtown the entire time. We used to go to markets in Hoboken and Madison and South Orange, but with three kids, the farmers’ markets and a farm stand, running the farm and doing the Halloween stuff, it was just too much,” she said. “We were spreading ourselves too thin.”
The big red barn they used to convert into a drive-thru market was filled with equipment. They cleared it all out, added a concrete floor and refrigeration, and opened their CSA in May.
“The only marketing we did was through our Facebook page. People were so afraid to go into the stores,” Sharon said, noting she is steadfast about posting updates on a weekly and sometimes daily basis, so their customer base knows what is in season and what to order.
Kevin said they are also in the process of building a kitchen and a bakery on the farm, “but that’s going to take some time yet.”
How do they keep track of it all and manage all this activity?
“It’s me and Kevin,” Sharon said. “We do it and I can tell you we have our share of discussions, but it’s like any other business, you develop a routine and I have an Excel spreadsheet and keep track of inventories.”
As part of their routine, Sharon said they make trips to the Philadelphia Wholesale Produce Market on Mondays then again either Wednesday or Thursday nights.
But even in a routine, Sharon said she appreciates that every day is different.
“If I had an office job where I had to answer phones or sit at a computer every single day, it would drive me nuts.”
Spring means getting soils ready and planting seeds and summer is planting and harvesting and selling and fall is Halloween and then winter is a little calmer, she said.
“Most people who work 50 weeks a year, they get about 100 days off; we don’t really have 100 days off, but we have time to regroup and relax in the winter months.”
Kevin said he has no frustrations with farming for a living and loves every minute of most days.
“I like watching stuff grow and I like the fact that people come from miles away just to get my corn and tomatoes.”