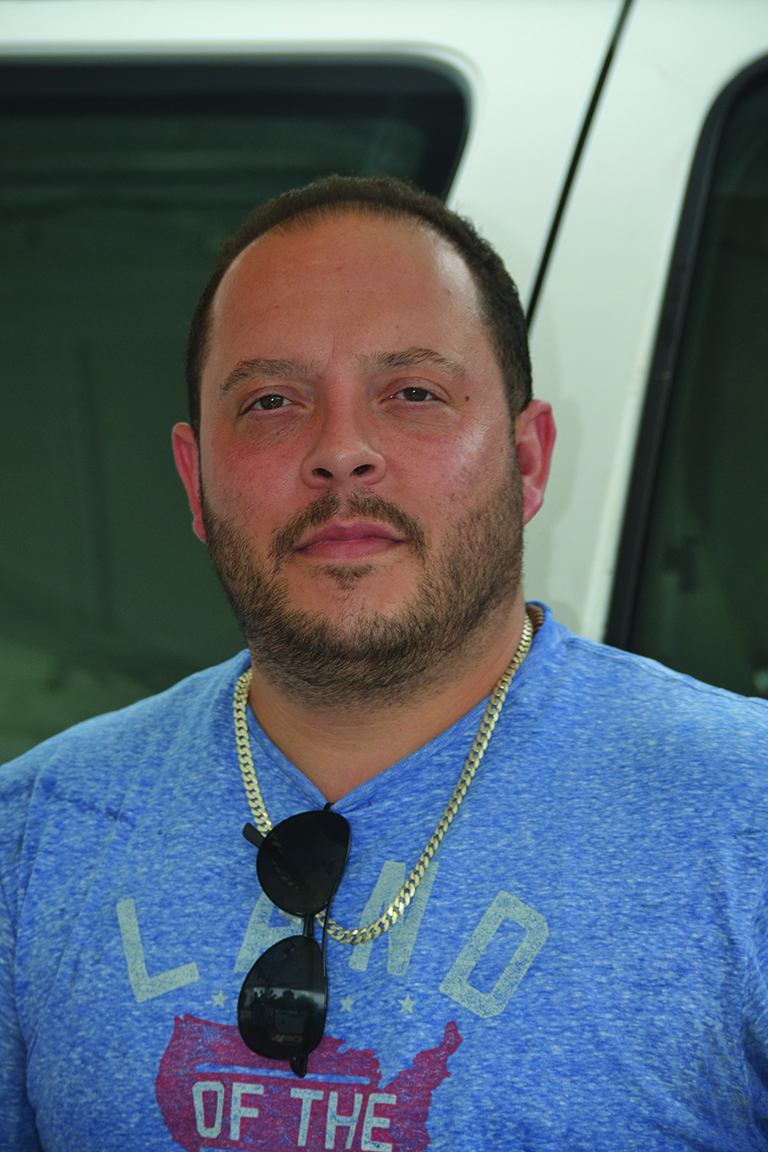 John Cascina is one of the mainstays of the Lafayette Farmers Market. (Photo by Jane Primerano)

LAFAYETTE — The shops in the once-bustling mall here are mostly closed, but on Sunday mornings the parking lot is alive with shoppers.
The Lafayette Farmers’ Market has been going strong for three years with organic farmers, mushrooms and warm bread among its draws.
On a recent Sunday, Harriett and hound/lab puppy up for adoption was the “greeter” for the farm market.
Bello Pane’s John Cascina calls the Lafayette Market one of the best and he does markets in Lancaster, Pa., and Tuxedo, NY. Known for his emapnadas, Cascina says he sells between 500 and 600 a week.
More in line with the original purpose of farmers markets, Kent Kimball of White Township sells his organic produce at Lafayette as well as Blairstown. He credits a core of good vendors combined with some who come in on a rotating basis with the success of Lafayette. In addition, recent residential development in nearby Sparta Township provides the market with local customers.
Blairstown’s market sponsored by the Foodshed Alliance opened for the season on Saturday, June 4, to a big crowd and most of the regular vendors.
The death of Valley Fall Farm’s Roman Osadca, known in Warren and Sussex County as the “Garlic Guy,” left a vacancy in that crop, but Kimballs and Arena farms returned and a popular bakery was joined by a kambucha vendor. Blairstown has a number of crafters each week and entertainment from local musicians.
Clinton’s farmers market is smaller but very popular in that Hunterdon County community.
Jim Power was representing Croton Farmers Cooperative who do the Clinton market as well as the Stangl Factory market and an on-farm stand.
Power, along with Sheila Sweeney and Jonathan and Chelsea Brown, operates Mountain Meadow Farm that produces grass fed meat, quality hay and mulch hay in Flemington. Blue Jingler Farm, also in Flemington is operated by Jack and Cheryl Gaskell and offers grass fed beef, pastured pork, pasture raised chickens and eggs. Mt. Salem Farms offers local lamb, also in Flemington.
“You can have too many markets,” Power said, noting that sometimes a bigger market will push out a nearby smaller one.
He appreciates Clinton’s market because “It’s a farm market not an entertainment center.”