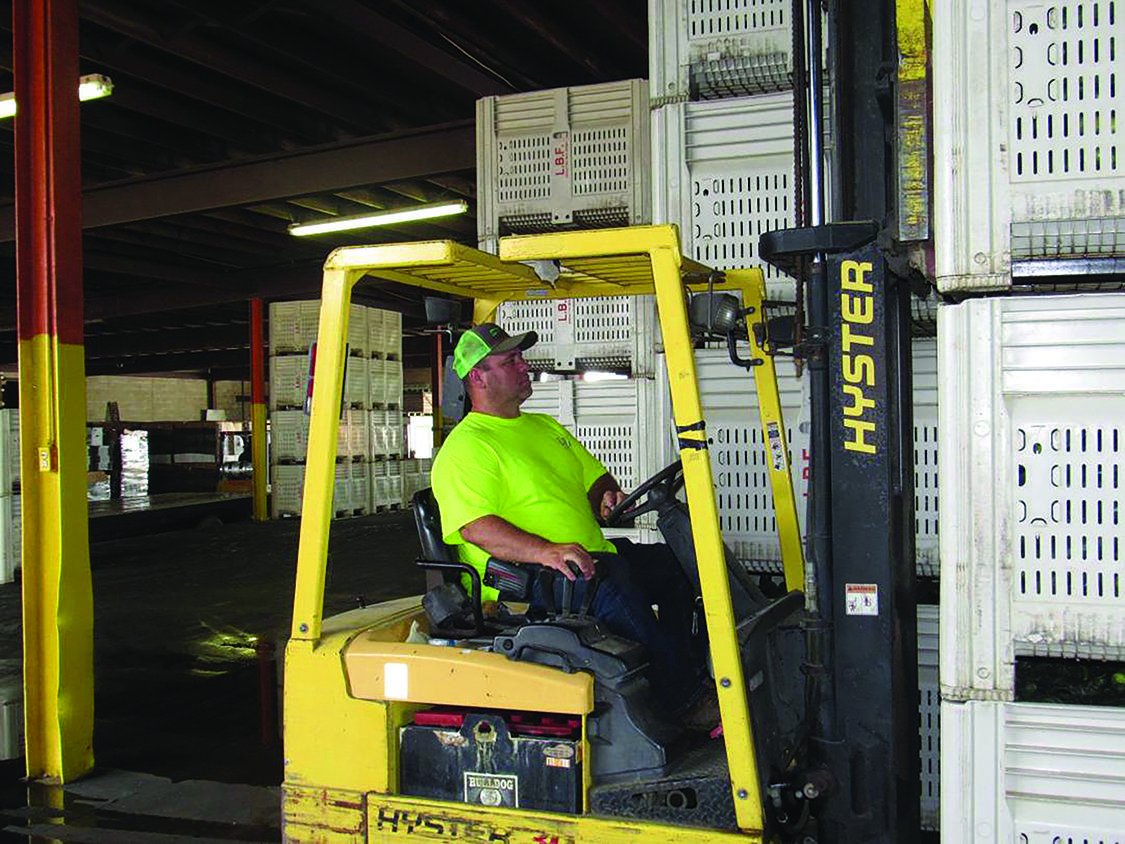 Alby Laning prepares to load bins of cucumbers onto the line so employees can grade and sort them. ( Photo courtesy Laning Bros. Farms)

BRIDGETON — Alby Laning, 51, a fifth-generation farmer of Cumberland County’s Laning Bros. Farms, has worked other jobs.
“When I was younger, when I was 18, I left the farm for about a year and I did construction work, and then I worked in a glass house for a little bit, and I quickly realized that wasn’t my thing,” he says.
His “thing” is, of course, farming, and he talks about the history of his Laning Bros. Farms, which was founded in 1935.
“We’re about 800 acres now. My great grandmother (Bessie Graves Laning) and great grandfather (F. Everett Laning Sr.) started the farm. There was about 10 acres,” he said.
After their passing, their two sons, F. Everett Jr. and Milton, continued farming those acres, but also expanded. “Over the last 30 or 40 years, we bought a couple of other farms and added on, and now we’re up to about 800 acres. We farm about 1,000; we re-crop a couple hundred acres, and own about 800 acres.”
Located in Bridgeton, Laning Bros. Farms grows about eight different varieties of lettuce and cabbage, bell and hot jalapeno peppers, cucumbers, and also grows some grains in wheat, soybeans and corn.
“Pretty much as a rotational crop for the ground,” Laning says of the latter few.
As for current challenges on his south Jersey properties, Laning doesn’t hesitate.
“Right now, the Diamondback Moth,” he says. “With the cabbage crop, the Diamondback Moth are very destructive. In the middle of summer, we used to grow a lot of cabbage, and it’s getting harder and harder in the middle of summer because the Diamondback Moth regenerates so fast.”
Laning has three daughters who work for him.
However, the two oldest are in optometry and nursing schools, respectively.
His youngest daughter has expressed interest in farming as a career, and if she chooses to continue in that direction, she’ll extend the farm to a sixth generation.
Until she makes her decision, Laning may be the fifth and final.
“I’ve tried carrying it on,” he says, “and as the fifth generation tried to keep the family business going. It’s what you and your family have done all your life, it’s what you know, and you try to keep it going. It’s a struggle and getting tougher all the time. The expenses, the labor — and it’s getting hard to find labor.”
Laning Bros. Farms ships produce both far north and south. “Pretty much the whole east coast and up into Canada, also,” Laning says.
Through the years, the farm has been recognized for some significant accomplishments, including highest tonnage of tomatoes in the Garden State, Soil Conservation Awards, and in 2008 was both one of the first farms to become certified for leafy greens through the USDA’s Food Safety Audit, while also being presented with The Bridgeton Area Chamber of Commerce Award for agriculture.
2021 has been a good year for crop production for Laning and his team, but orders are down.
“There’s not as much demand for it this year for whatever reason, I don’t know,” Laning says. “More restaurants went out of business than people realize, some of the grocers who used to order 200 or 300 boxes at a time are ordering 30, 40 or 50 — a lot less of an order than we used to do.”
Still, Alby Laning and his Laning Bros. Farm team continue moving forward. It’s a challenging life, but, “I love the outdoors,” he states. “I love waking up in the morning and being able to smell the fresh air. I’ve worked on the farm since I was 10 years-old. That’s what I’ve always wanted to do.”