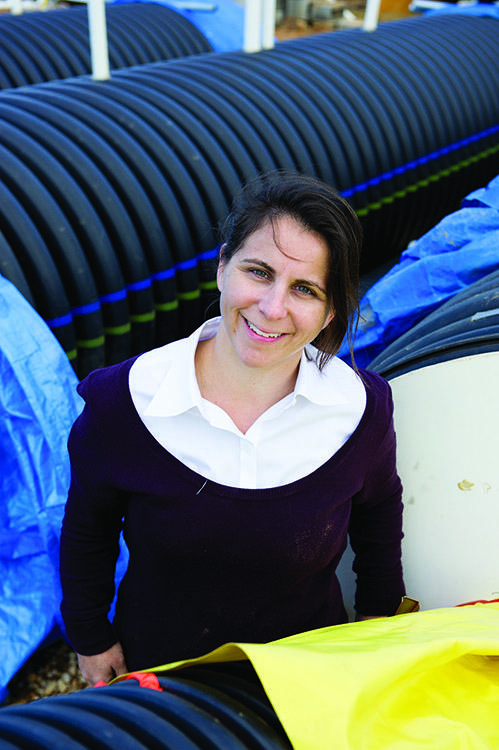 Stephanie Lansing, professor in the Department of Environmental Science and Technology at the University of Maryland, is leading two new grants totaling $6 million from the U.S. Department of Energy to develop sustainable products like biofuels and bioplastics from food waste. (Photo by Edwin Remsberg)

COLLEGE PARK, Md. — Stephanie Lansing, professor in the Department of Environmental Science and Technology at the University of Maryland, is leading two new grants totaling $6 million from the U.S. Department of Energy to develop sustainable products like biofuels and bioplastics from food waste.
With about a third of the food produced in the United States not being consumed, food waste is a major concern for municipalities across the country. At the same time, products like plastics and traditional sources of fuel rely on fossil fuels, which are finite and costly to the environment.
With these two grants from DOE, Lansing is leading a consortium of scientists and industry partners to not only research innovative ways to use waste, but also make value-added products that will contribute to the sustainability of our economy and planet.
“These grants are aimed at understanding the waste sources we have, particularly the quantities of food waste, and determining what opportunities exist for us to create renewable resources and energy from that waste,” says Lansing. “One grant is focused on the production of bioplastics from food waste, while the other is focused on characterizing the municipal solid waste stream to create biofuels that can replace liquid fuels like gasoline.
“The two grants are really focused on different avenues for renewable resource production, which fits in perfectly with the work my lab has been doing for a long time. How can we take the resources we have and find a way to use them sustainably?”
These new grants from DOE are a natural extension of the work Lansing does in her Bioenergy and Bioprocessing Technology Laboratory, converting waste products into energy and value-added products, often through a process called anaerobic digestion (such as at the Port of Baltimore).
“With anaerobic digestion, we are having bacteria make natural gas for us from waste that can be broken down biologically instead of using fossil fuels,” says Lansing. “This process works well with food waste, but most of our food waste is co-mingled in the larger municipal solid waste system and is mixed in with other things. For waste that has thin plastics and other bulkier products that won’t degrade biologically with anaerobic digestion, we can use a gasification process instead, which is a thermochemical reaction that will produce the gases we need in a controlled way.”
As part of the $3.5 million grant focused on biofuel production, Lansing and her team across Ohio State University, Mississippi State University, Virginia Tech, Idaho National Lab, SCS Engineers, and Quasar Energy Group will be first conducting a large characterization study across every region of the country and every season of the year to understand how location and the time of year affects the waste coming into landfills, and what the biofuel potential of that waste really is. “It’s taking a holistic view of the waste stream and working with a realistic picture of waste to create value-added products that can be used by industry, governments, and municipalities dealing with food waste, paper waste, and other waste that can be turned into fuel,” says Lansing.
With that understanding, the goal is to separate wastes through processes similar to the way that recycling and trash are currently separated.
Once the recycling is removed, the leftover waste can be separated into waste that can be broken down with anaerobic digestion, like food and natural waste, or waste that needs to be broken down thermochemically through gasification.
Once broken down, both forms of waste can then be reconstituted back into liquid biofuels to be used similarly to traditional gasoline and diesel.
With the other ongoing $2.5 million DOE grant, instead of producing biofuels, the goal is to produce bioplastics that are not only made without using fossil fuels, but can then be degraded much more easily than current plastic products. This work includes Amro Hassanein, assistant research scientist with UMD in Environmental Science and Technology, as well as external partners from the Naval Research Laboratory in Washington, DC, the Idaho National Laboratory, Virginia Tech, and Quasar Energy Group.
“This project is really about giving food waste a value, but instead of converting it into energy like we have in the past, we are stopping the anaerobic digestion process early and then feeding the carbons to a different type of bacteria that can actually build up materials within their cells to make bioplastics,” explains Lansing. “It’s creating a new pathway for food waste to create a value-added product that is more sustainable than current plastics on the market. We are trying to create these bio-based plastics that can not only be rigid enough to be used as plastics, but they can also be degraded. It’s not something that lives forever in the environment, and it doesn’t use fossil fuels as part of the production process.”
Both grants involve an assessment of sustainability and an economic assessment against the current products on the market to see how marketable these new bioplastics and biofuels can be.
This is why industry partners become so important, since they will help commercialize any new products.
“It is exciting to have the opportunity to convert waste products into high value-added products like bioplastics and biofuels, compared to some of the relatively low value biogas and power products that are already being produced,” says Xumeng Ge, Quasar Energy Group. “Quasar’s goal is to commercialize this technology and get it to the marketplace.”
“The idea is to help create that circular economy,” adds Lansing. “Fossil fuels are carbon chains from millions of years ago under a lot of pressure. But what we are doing here is taking advantage of other carbon chains – we have carbon chains in food waste, carbon chains in manure, carbon chains that we can use to then create bioplastics or fuels.
We are basically trying to use either biological, chemical, or thermochemical systems to recreate the different products that currently come from fossil fuels, but using the available waste resources we have now.”