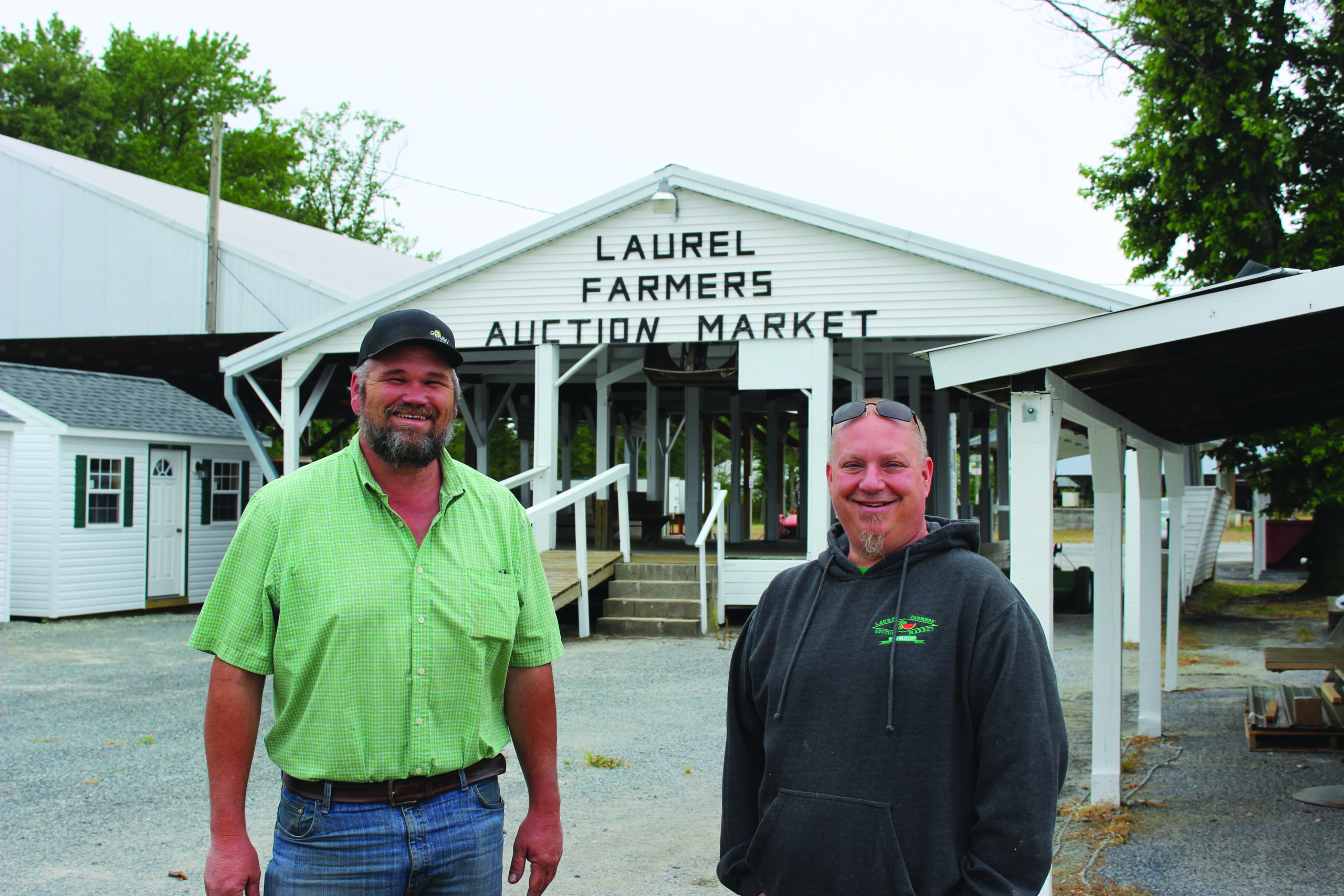 Rick Dickerson, left, Sussex County farmer and president of the Laurel Farmers’ Auction Market’s board of directors, and Tom Holston auction market manager, said interest from produce buyers is building as the auction begins its 80th year on June 26. (Photo by Sean Clougherty)

LAUREL, Del. — Through its long history, the Laurel Farmers’ Auction Market, known to many as just “the Block,” has made changes in order to continue serving farmers.
This year, the auction is set to open for its 80th year on Friday, June 26, and though new protective measures will be in place to protect against the coronavirus, the auction will go on.
“They never had a year where they didn’t go forward,” said Rick Dickerson, president of the market’s board of directors. “Eighty years strong.”
New protective measures include limiting two people per buyer number, having people wear masks while under the auction pavilion and limiting to two people at at time, in addition to auction employees in the auction office, during check-in and check-out times. Children will not be allowed at the auction and those who would just come to watch the auction and not actively bid are discouraged from coming as well.
The pandemic has put a fresh spotlight on locally grown produce and Dickerson, who buys and sells produce at the auction, said they have received a lot of interest leading up to opening day.
“People are really excited about us being open and getting fresh produce,” he said. “It seems like demand is going to be high.”
Auction market manager Tom Holston said while the general public doesn’t make up the majority of the sales, their bidding tends to support prices which helps the farmers selling at the auction.
“It seems like there’s a big push for everybody to get fresh this year,” he said. “They’re willing to spend a bit more so that does bring the prices up.”
Along with the added safety precautions, the auction market will open this season with a remodeled concession stand and new offices for brokers who rent space on site to arrange loading and shipping with large wholesale growers during the season.
On opening day, registration will open at 7:30 a.m. with the auction starting at 9 a.m. July 1 and 3 will be the next sale days before expanding to six-days a week starting July 6. Squash, zucchini and cucumbers are likely to be the most plentiful crops starting out, Holston said, but over the course of the season, more than 50 different crops will get dropped off by area farmers to go through the auction.
It’s a lot different from the auction market’s early years, when a line of trucks and wagons loaded with melons and other produce stretched out onto the highway and sales lasted into the evening hours. But as the farming industry changed, the market adjusted to continue to be a resource for farmers.
In 2012, the auction board approved building a new pavilion that’s been devoted to bin and box lot sales, a move that grew sales dramatically at the auction.
They also began selling boxes and packaging supplies at the auction to help smaller-scale growers.
“They’re pretty dedicated to making it work and looking to the future,” Rick Dickerson said of the board of directors. “Everything here is basically to serve the farmer.”
Started in 1940, the Block quickly became a center for agricultural commerce in Sussex County, particularly for nearby melon growers.
Produce auctions operated in at least six other Delaware towns in Kent and Sussex counties and a broker-controlled auction called the Laurel Produce Association preceded the Block.
“Farmers were dissatisfied with the trade practices followed at this auction and charged that the brokers controlled the auction to their advantage,” Ed Kee, former Delaware agriculture secretary wrote in his 2000 book on the history of the auction’s first 60 years, “Where Buyer and Seller Meet.”
“Consequently, growers using these auctions were subjected to restrictions and procedures that often prevented arriving at a fair price. Or worse, buyers bought from favorites or stimulated over production by promising more sales than they could deliver.”
After a series of meetings of area farmers in the early part of 1940, a 10-member board of directors was formed and set out to get more farmers to buy the initial stock for a farmer-operated auction.
They ended up with 213 people, nearly all farmers, chipping in $5 to generate the seed money to start the Southern Delaware Truck Grower’s Association and its Laurel Auction Market.
For Dickerson, the auction’s history is intertwined with that of his own family. His great-grandfather Norman Dickerson was one of the auction’s original board of directors, his grandfather, John O. Dickerson served as board president and his father Jack was involved for years.
“I grew up at the Block,” Rick Dickerson said. “There’s a lot of pride in it. Seeing it succeed and go on for generations does a lot for me.”
The farmer-owned market opened on May 27, 1940, across Tenth Street from the broker-owned Laurel Produce Association, with strawberries then moving through several crops as they came in season.
The Block’s popularity took off quickly and by August that year, the broker-owned auction was shuttered.
In 1954 the buildings and operations of the Block were moved to its current location on Georgetown Road near the newly opened Route 13 dual highway.
But even before the move, growers flocked to the auction, forming long lines of trucks around the auction property and waiting for hours to have their lot sold.
That was the Block’s course for decades as growers went through the auction’s drive-thru building that still stands today, then to the buyers dock stall for loading and were paid in cash that day.
According to Kee’s book, in the 1990s, with grocery chain stores wanting more advance notice of price and quantity information and the improvement of seedless varieties, more and more watermelon sales moved away from the auction’s hammer toward private agreements between grower and broker with the auction grounds becoming a site mainly for loading.
In recent years, more watermelon growers built packing sheds on their own farms to hasten shipments.
But there’s still plenty of activity at the Block.
About a half-dozen brokers use the Block through the growing season, Dickerson said, with the market coordinating payment to the farmer.