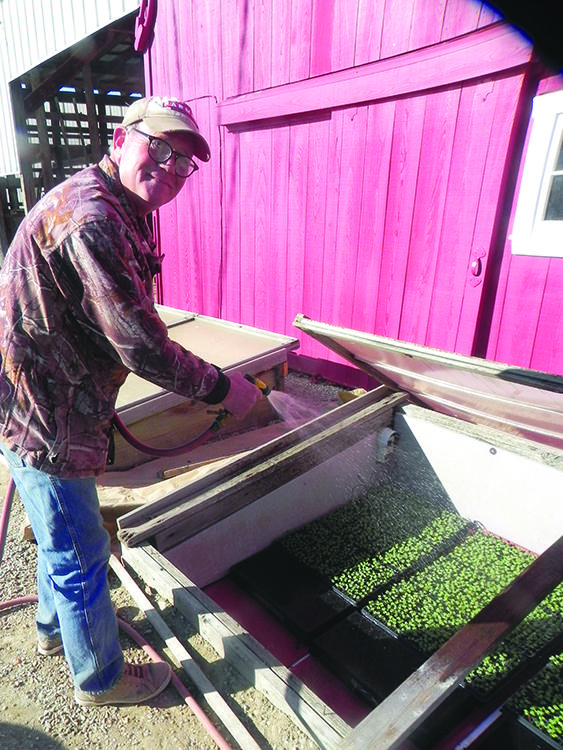 Ronnie Lee grows up to 4,000 seedlings in each of his heated cold frames, translating into about 8 acres of field-grown produce. (Photo by Richard Skelly)

EAST WINDSOR — Back when he was 19 and working full-time on the family farm, turkey, fruit and vegetable farmer Ronnie Lee didn’t want to build a greenhouse on the family’s property, which is in between housing subdivisions on Hickory Corner Road.
Instead, he built two large cold frames and improved on designs he’d seen elsewhere.
“My father ran the turkey business and my grandfather ran the orchards,” he said one sunny Saturday afternoon from a barn on his property.
“My father grew corn and tomatoes of course, but I got started because he gave me a plot of ground and said ‘Hey if you want to grow stuff and sell it, start growing it here.’ Originally, I started with pumpkins, things I could see right in the field. Then I saw a market for broccoli and cabbage and peppers and eggplant and cantaloupe and watermelons,” he said.
As much the veteran turkey processor now as he is a vegetable grower, Lee, 60, knows from experience not to move seedlings to his open fields prematurely.
He recalled that Charlie Holmes was the ag Extension agent for Mercer County 40 years ago, and “he was a wonderful support system” for Lee as a beginner farmer. Also important was Henry Estennes, who died last year at 95, Lee said.
“I went over to Henry’s farm to look at his greenhouses and he gave me all kinds of ideas,” Lee said. “I said to them, ‘I don’t want a greenhouse, I want to start small, I don’t want to get into this too big, I don’t know much about it, I’d like to do cold frames.’”
Holmes got him a book on cold frames and Lee realized he wanted something a little different, so he designed them himself, with sliding panels over the tops and a system to let warm air in during the day.
In looking into greenhouses, which Lee decided were too expensive, he found out about propagations mats.
“I thought, why can’t I put propagation mats in a cold frame? I thought, ‘it’s got to be cheaper to heat than a greenhouse or two, so I made my cold frames to fit the propagation mats,” he said.
He set up thermostats in each to monitor temperatures and sliding roofs to vent his precious seedlings that much easier.
He chose redwood to build his frames and put them together in 1980. He started out small, using 48 plants per flat and then went to 100.
“Then finally I got 200 plants per flat and I realized it’s the most I can do, but in that area for one cold frame, I could start 4,000 plants at a time.”
The only drawback to the system was he had to stay close to home at all times to monitor the seedlings in accordance with changing weather conditions.
Now every March, he can start 8,000 plants at a time between his two custom-build cold frames, which have been renovated and tweaked for improvement over the last four decades.
This year he started with cabbage broccoli and tomatoes in March, peppers and eggplant in April and more tomatoes in May.
“In April, I’ll do more broccoli and cabbage because we do three plantings of broccoli and cabbage out in the fields,” he said. Also in May, he monitors his watermelon and cantaloupe seedlings carefully.
Lee acknowledged there are many plant growers nearby WHO could start seeds for him but he likes having control over the whole process.
“This way, by buying the seeds, I can start them when I want to have the varieties I want and have them ready for transplant when I need them,” he said.
The black plastic seedling trays sit right on top of the propagation mats and Lee and his family live in an old farmhouse on-site, so he can check his plants at any hour of the night when frost warnings are issued.
What about heating costs for his warmed up propagation mats?
“It’s basically the price of light bulbs compared to a greenhouse,” he said.
Once he’s underway with vegetable production on the farm, “what comes out of the cold frame is eight acres of produce. It’s not your peas, lettuce, spinach and sweet corn; that’s all field-started. It’s just the things you cannot start in the field like broccoli that take too long to germinate and you’d be covered with weeds before you would see the seeds.”
Lee also has excess seedlings should something go wrong in the field.
“I can set out my plants in the field and leave the others in the cold frame,” he said. “They will not outgrow these trays; they will stay that size until I’m ready to put them in the field.”
Lee and his son Dylan and wife Janet, aside from raising thousands of free-range turkeys each year for Thanksgiving — grow over 60 varieties of vegetables. He offers up his vegetable rows to you-pick customers as well as up front at his retail stand.
“I grow four different varieties of eggplant, 15 varieties of peppers, and now I’m back down to six or seven varieties of tomatoes that I and my customers really like.”
Lee, with more than four decades in vegetable and fruit growing, said he has one main rule for his pick-your-own system.
“If it grows underground, I just don’t grow it,” he said. “It doesn’t work for pick-your-own, I can’t do it.”