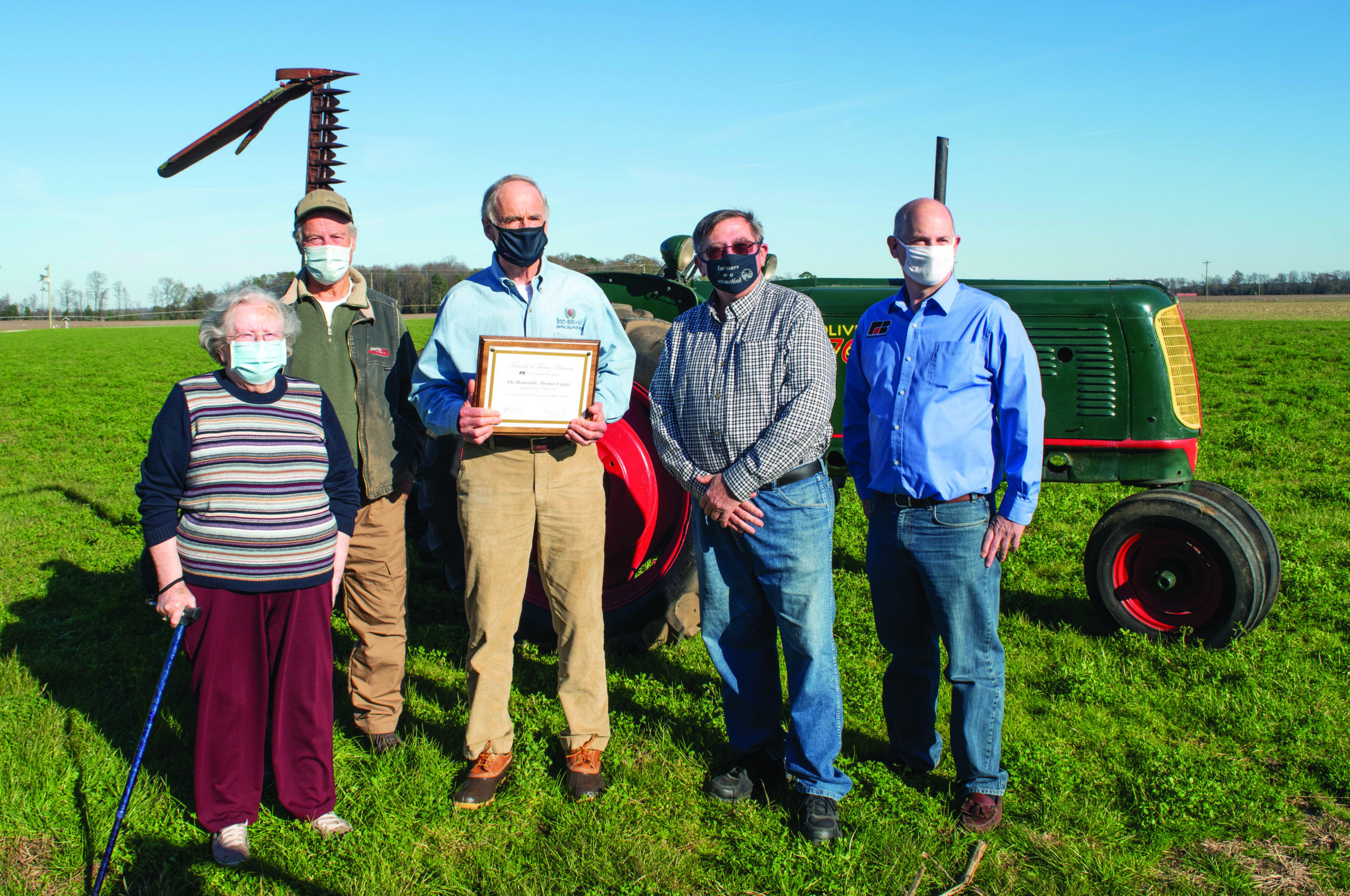 CAMDEN, Del. — U.S. Sens. Tom Carper and Chris Coons, D-Del., were honored with the Friend of Farm Bureau Award Nov. 20 in recognition of legislative support of American farmers and ranchers.
The awards, offered by the American Farm Bureau Federation, were presented by Delaware Farm Bureau Board President Richard Wilkins to Sen. Carper at Stayton Farm in Houston, Del., on Nov. 20 and to Sen. Coons on Nov. 24 at the Farm Bureau office in Camden.
The award is presented to selected members of the United States Congress every two years in honor of their congressional voting record in support of Farm Bureau positions on policy issues.
They must be nominated by their state Farm Bureau in order to be considered by the national organization for the award. Congressional members nominated then need to be approved by the AFBF Board of Directors before the award can be presented.
In Delaware, Wilkins says both Sen. Coons and U.S. Senator Tom Carper, D-Del., fit the bill.
During the most recent 116th congressional session, for example, Carper co-sponsored Senate Bill 3797, or the Small Packer Overtime and Holiday Fee Relief for COVID-19 Act of 2020. Supported by AFBF, the bill was designed to aid farmers and ranchers during the pandemic.
“Throughout his career of public service, Sen. Carper has sought input from farmer leaders on how they would be impacted by public policy decisions. He has always looked for solutions that are fair and reasonable. Sen. Carper has the utmost respect of the hard-working families that make America nutritionally secure,” Wilkins said.
Sen. Carper also supported Senate Bill 3548, the CARES Act, earlier this year which allowed for $16 billion in direct payments to be given to farmers and ranchers dealing with unprecedented financial difficulties as a result of the pandemic, among other relief measures.
Throughout the pandemic, Sen. Carper spent time visiting farms in Delaware and discussing the needs of farmers, their families and their workers with leaders at all levels in hopes of creating a better situation for agriculture producers.
Additionally, he advocated for the United States to include poultry industry in trade agreements to ensure farmers all over the country could continue using trade as a vehicle for revenue.
Sen. Carper joins a host of other past and current congressional members who have been presented with the Friend of Farm Bureau Award for their legislative service to the industry since the honor began in September 1996.
“Delaware may be a small state, but we sure punch above our weight when it comes to agriculture, and that is all thanks to the tireless work of our farmers,” Carper said. “They fuel our economy, keep our families fed and show us every day how to be good stewards of the land that we all call home. We’re also so grateful for the hard-working men and women who support the agriculture industry and are great collaborators on legislation and policies that help keep this industry thriving here in Delaware. I’m honored to work with our growers and producers on putting in place smart policies that provide stability, while also supporting trade and conservation practices. Thank you to Richard and to the Farm Bureau members for recognizing the work we do together to ensure our nation’s farmers — especially the 2,300 family farmers here in the First State – can continue to do the critical work they do and stay in business for generations to come.”
Wilkins said Coons takes his involvement within the agriculture industry to a new level as a co-chair for the U.S. Senate Chicken Caucus. This year, he worked with the caucus, industry leaders and legislative colleagues to advocate for coronavirus relief funds in the form of direct payments for contract chicken growers who were not included the first round of relief measures.
“Delaware Farm Bureau appreciates Senator Coons’s bipartisan spirit,” Wilkins said. “As the co-chair of the Senate Chicken Caucus, he has been a tireless advocate of gaining greater market access for USA poultry globally, as well as working for solutions to challenges that our poultry farmers face domestically.”
Coons has also pushed for help in both the HEROES Act, 2.0 and the HEALS Act, or Health, Economic Assistance, Liability Protections & Schools Act, continuing his commitment to farmers, ranchers and their operations at all sizes throughout the United States.
According to his office, Sen. Coons, a member of the Senate Appropriations Committee, has also advocated for funding for entities such as the Farm Service Agency, Food Safety Inspection Service and APHIS, or the Animal and Plant Health Inspection Service.
These funds work to improve on rural development, environmental issues, land conservation and rural housing programs. Agriculture research is also included in this year’s appropriations bills, much of which is facilitated at the University of Delaware, his office said.