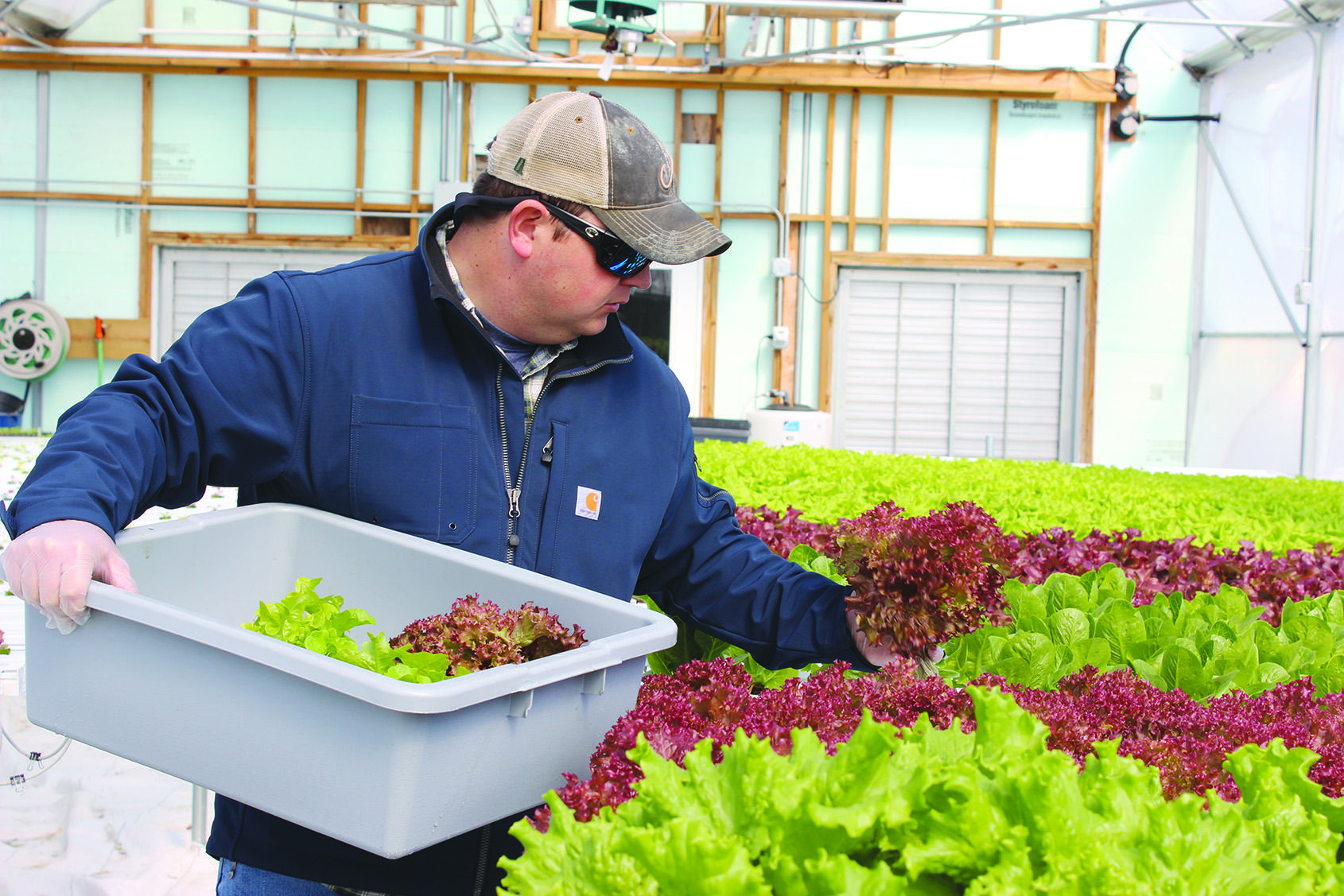 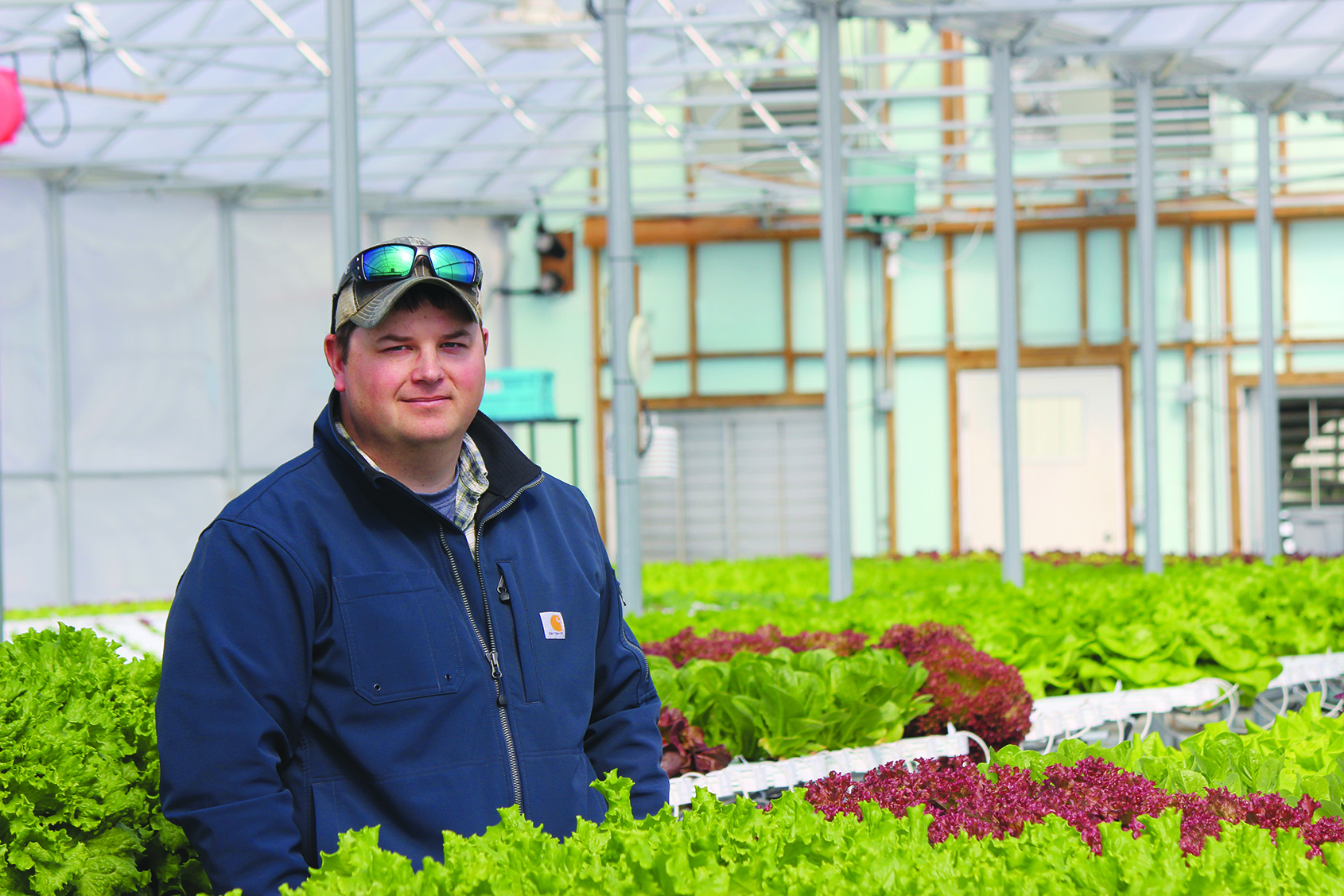 Hydroponics combined with a retail farm market generated a path for Kyle Sturgis to come back to his family’s farm full time. (Photo by Sean Clougherty)

CAPE CHARLES, Va. — In January 2020, Kyle Sturgis harvested the first lettuce from a newly built hydroponic greenhouse at his family’s Shore Breeze Farms.
He was selling to local restaurants and the public and was making in-roads with area schools to have lettuce served on school lunch trays when the coronavirus pandemic set in almost a year ago.
“COVID was not in the business plan, I can tell you that,” Sturgis said. Along with the steep learning curve of the new lettuce operation, they were inching closer to opening their farm market which adjoins the greenhouse, for the season.
“Our day-to-day was the same but there was uncertainty about opening and where we were going to sell it.”
Growing at full capacity with a “you can’t sell it if you don’t have it” mindset, Sturgis said they were forced to cut back production by half and come up with new strategies to market what they were growing.
They started offering pre-made salad kits with their lettuces and vegetables from other area farms. Participating in an online farmers market helped a lot, too.
“We pretty much followed the same model” as other farms, Sturgis said.
In hindsight, it may not have been the best year to begin the new venture but Sturgis said he is undeterred from keeping it going.
“There’s a need for it,” he said. “We wanted to be a place to give the community a fresh product all year long.”
Sturgis grows six different kinds of lettuce on a 30- to 45-day cycle depending on the time of year. He follows weekly schedule with a different task — seeding, transplanting, harvesting, sanitizing and maintenance — set aside for each day.
Shore Breeze is owned by Sturgis’ father, Steve Strugis, and a business partner with Kyle as the manager. Steve also farms about 1,200 acres in Northampton County growing corn, soybeans and processing crops. Kyle’s brother, Jarrett, focuses on the row crops operation but as a family operation, they help out wherever it’s needed, he said.
For eight years after graduating from Ferrum College, Kyle worked for Helena Chemical as a field agronomist but said his long-term goal was to come back to the farm full-time and the hydroponic operation created that opportunity.
Kyle said his father had an interest in hydroponics for decades and Kyle chose the topic for a senior thesis in college.
“We felt like we needed to diversify our operation,” Kyle said. “It was a way I could come back to the family farm and be involved in things.”
Kyle and Jarrett, making up the farm’s fifth generation, were growing produce for a few years to sell locally, and established a farm market within sight of U.S. Route 13 and near Cherrystone Family Camping Resort.
“We set up here, trying to capture the campers going to Cherrystone and people on the highway and so forth,” Kyle said. “This property basically had everything we were looking for.”
Along with location, an important quality of the site was its capacity for expansion.
Kyle said their initial plans were to add more greenhouse space as they build their market, adding tomatoes, cucumbers and other crops to their hydroponic lineup.
The operation got a boost to that end in July, when Gov. Ralph Northam announced a $15,000 grant to Northampton County for Shore Breeze Farms to expand its lettuce production by 30 percent.
Kyle said once pandemic restrictions subside, it will be good to get back to marketing to more restaurants, reintroduce the lettuces to school children but also keep online sales and other aspects that worked well last year. That could put them on pace to hire another full-time person by the end of the year, he said.
They are also working toward adding a pick-your-own component to the farm market.
“It’s a lot. It’s just kind of evolved like our farm market,” Kyle said. “I just feel, the more people you can get out on a farm the better we’ll all be.”