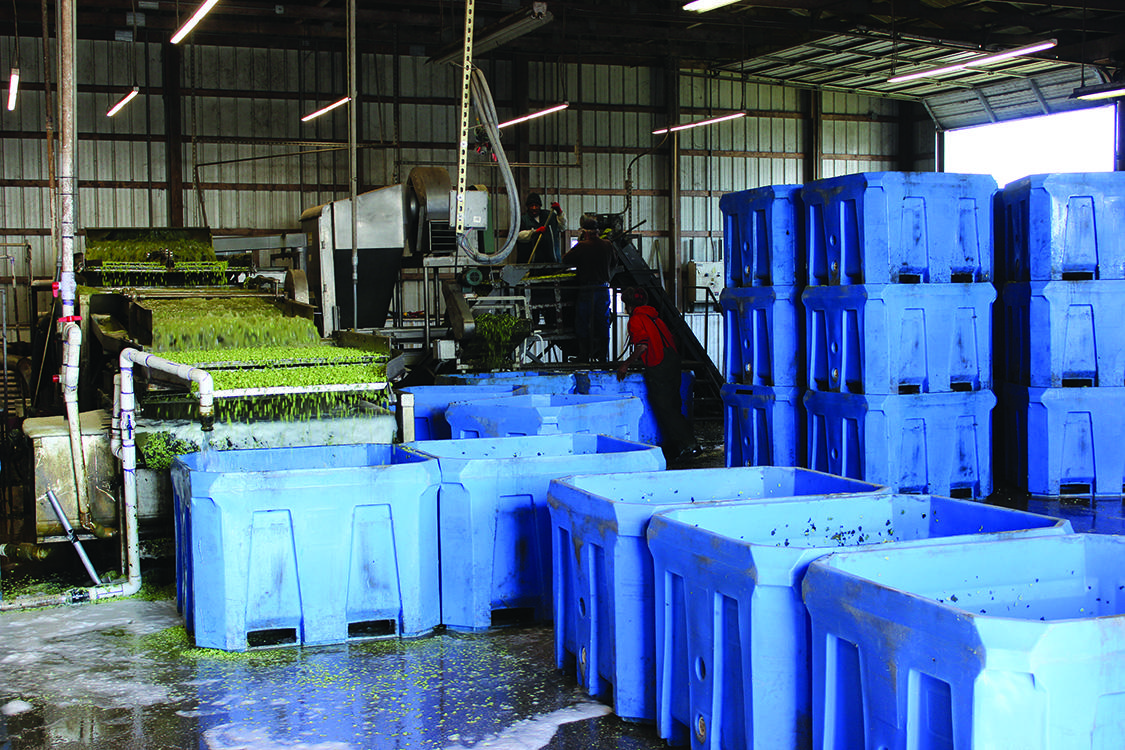 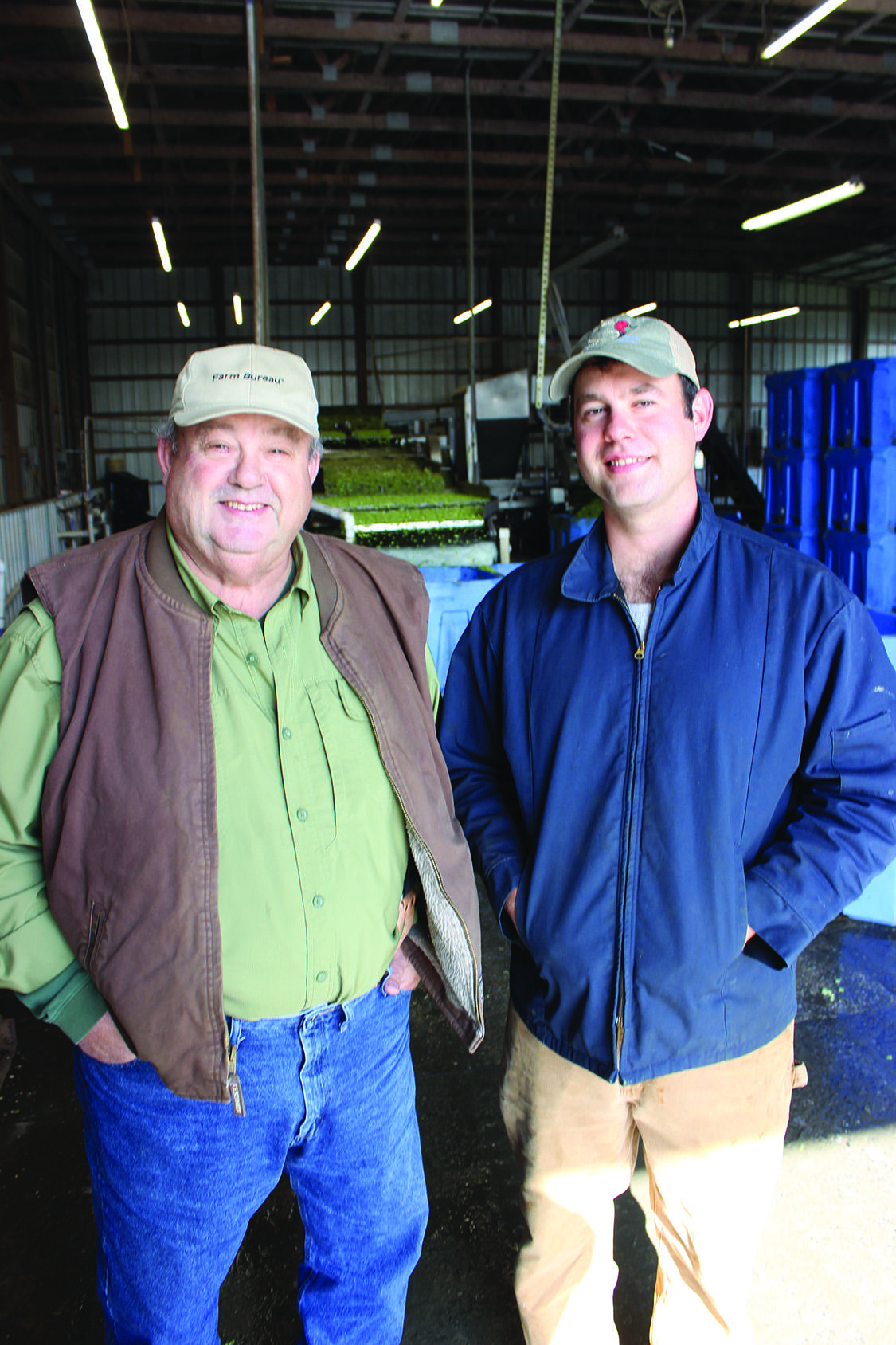 Don Clifton, left, with son John, said the lima bean cleaning line they initially bought for packing fresh beans has helped sustain the farm after transitioning it to serve the processing market. Above, On average, the Clifton’s line cleans between 4 million and 5 million pounds of baby lima beans a year, which then go to Seabrook Brothers in Bridgeton N.J. for final processing and packaging.. (Photos by Sean Clougherty)

MILTON, Del. — The cleaning line for lima beans at Clifton Farms may not do what it was originally intended for, but it’s a valued part of the overall operation.
After buying into the farm business at his father’s retiring in 1999, Don Clifton looked for a way to get back in the value-added side of the crop.
Lima beans go back four generations in the Clifton family, when William Carlton Clifton, started Clifton Canning Company in 1948, and running his own farm. The cannery operated until 1995, packing peas and lima beans.
Don settled on packing fresh lima beans for grocery stores and in 2004 invested in the cleaning line and clamshell packaging.
“We had researched the market. The market was there,” he said. “The one thing we didn’t anticipate was the packaging. We chose the wrong package.”
The vented plastic clamshell container they picked ultimately did not comply with grocery store food safety guidelines and turned away a lot of potential buyers.
As the fresh pack venture faltered, Don said he had a year with more limas growing than they had buyers for in the grocery distribution market and Don contacted Tom Godfrey, agriculture representative for vegetable packing company Seabrook Brothers & Sons to see if the processor could contract with them on the extra acres.
After Godfrey toured the cleaning line at Clifton’s, Don said discussion toward cleaning beans for Seabrook began.
“It seemed like a good opportunity to be more efficient,” Godfrey said, recalling the initial conversations.
Clifton said they started small, cleaning part of their acres, then all their own acres and eventually handling all of Seabrook’s Delmarva acreage.
“The circumstances that brought about this I don’t think could be replicated,” Don said. “Logically, it just progressed to that point.”
Trucked to the cleaning line from the field, beans are conveyed, washed and shimmied along, ending up in blue plastic bins to soak in water for several hours and recover some moisture.
From there, the lima beans are dumped into trucks and sent to Seabrook’s facility for final processing and packaging.
Two five-person shifts keep the line going during the bulk of the mid-August to November harvest season with a seven-person harvesting crew moving field to field.
“Most of the workers are pretty much the same,” Don said. “They can pretty much do the work in their sleep.”
Don’s son John Clifton joined the operation full-time about 14 years ago and now manages the day-to-day operations of the line.
“John knows it inside and out,” Don said. “There’s little improvements every year,”
John said there are a lot of components that need to come together, from the harvesting to transport to and from the field and the cleaning line operating, but when each one works like it should, it’s a great thing to see.
“I think there’s satisfaction in getting the job done, because it’s a challenge,” he said.
On average, the Clifton’s line cleans between 4 million and 5 million pounds of baby lima beans annually. One year they topped out at 7.25 million pounds.
“Everyone was exhausted at the end of that year,” Don said with a laugh.
He said the addition of the cleaning line, though it stumbled at first, has helped diversify the farm and would not have happened if they didn’t pursue the fresh pack avenue.
“It’s a nice value-added feature for our farm business.” Don said. “It fits in with the history of our operation. It fits our skill set and what we can do and I think we do it pretty well.”
For Seabrook, Godfrey said having the Cliftons handle the initial cleaning and washing steps allows its plant in Bridgeton, N.J. to push more volume through its line for the final cleaning stages than if it had to take beans straight from the field.
“It’s worth it to pay Don to do that for us,” Godfrey said. “Farmers have to find little niches to be sustainable. We’re anxious for our farmers to continue to develop sustainable programs.”
After this year’s harvest season wraps up next month, the Cliftons have plans to improve the operation, building a new loading platform and adding more space to its footprint with the goal of being more efficient and responsive.
“We’re committed to it not just because of the farm’s tradition, but because it’s a niche that Delaware agriculture still supports and it fits in with the Delmarva peninsula,” Don said.