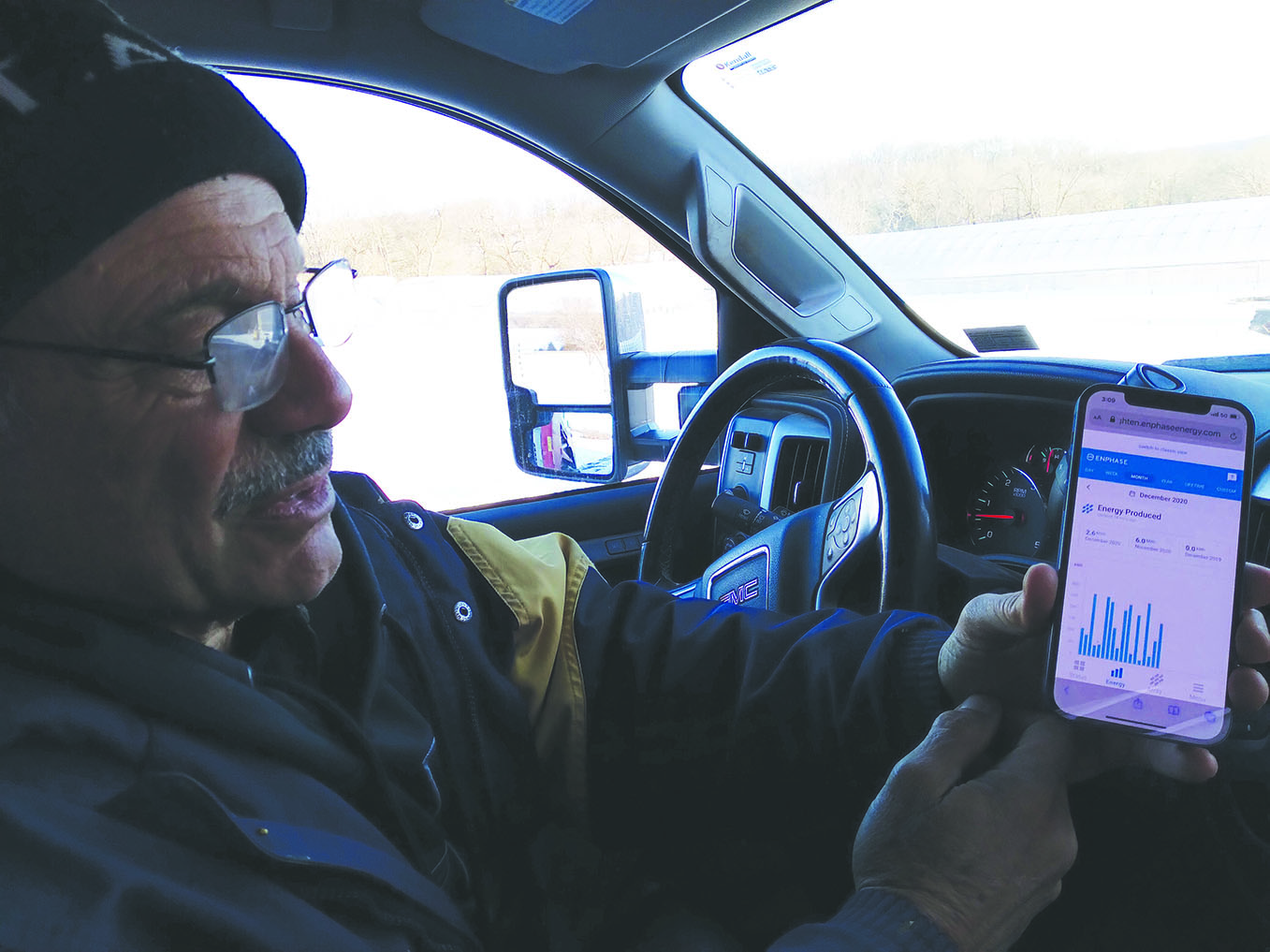 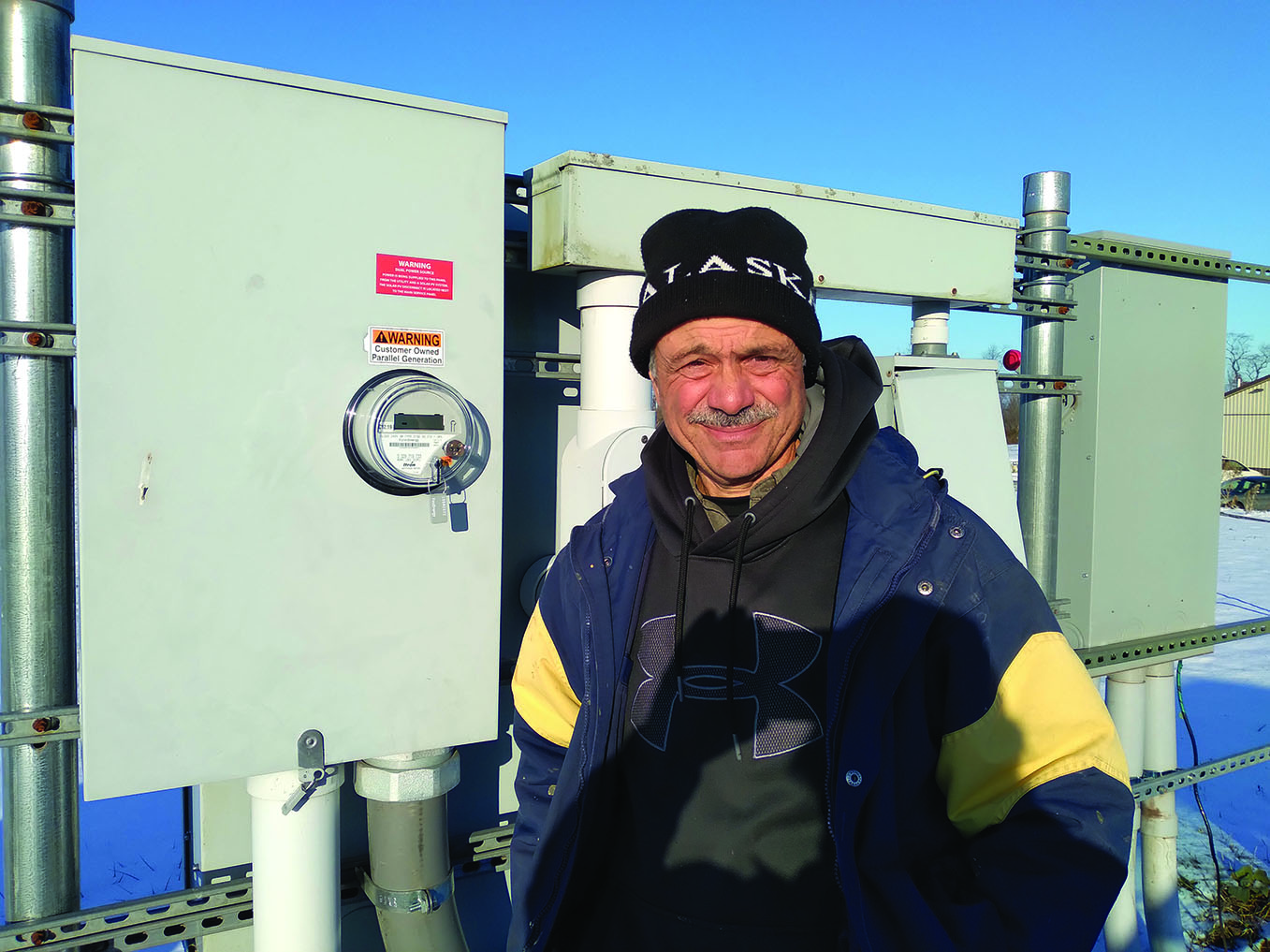 Lima says he and his family decided it was time to put up solar panels once they were spending a combined $2,000 a month on electric bills for their farm and an adjoining property. (Photos by Richard Skelly)

HILLSBOROUGH — John Lima, a second-career farmer who previously worked in civil engineering building earthen dams, follows as many organic and sustainable practices as he can at his Lima Family Farms.
He raises cows, pigs, turkeys and chickens on pasture and uses a number of hoop houses to help grow vegetables for his retail farm stand, which sits 1,000 yards down his long driveway off Amwell Road.
His spacious retail barn and farm store has a large walk-in freezer and several large refrigerators.
All are powered by renewable energy sources.
He’s invested in solar panels to power his retail, egg and pork operations and a geothermal system that heats and cools the house he shares with his wife, Kathy.
A separate house will be built on his acreage in coming months for his daughter Kate and son-in-law, who plan to move to the area from their home in Washington, D.C. to work full-time at the farm.
Lima bought the property he owns on Amwell Road in 2007 and built his house in 2009. It was completed by 2010 and he moved in from eastern Pennsylvania. As a civil engineer, he knew about geothermal power. He got his Masters’ in Civil Engineering from Drexel University in 1977.
“The goal was to be geothermal. I thought the only thing that would cost us money would be the pump that pushes the water in,” he said. The plan was to back up the geothermal system for his house and farm store and other farm operations with solar panels.
“When we were designing the house in 2008, I met with the well driller that was going to install the well.
At that time the only type of well I knew about was you pump glycol through the line in a grid system,” Lima said.
He said the well driller told him the water around his farm was clean enough that he could go with a direct pump system.
“After talking to him, we decided we’d have one pump that supplies us with our drinking water, the water for our vegetables and all our farm animals yet it also runs the 10 gallons per minute necessary to run our geothermal system,” Lima said.
At that time, 2009-2010, “there were a lot of federal and state tax incentives that government offered if you were building a new house. You could use geothermal for drilling your well and heating and a.c. systems and duct work. We decided to do it because we wanted to use renewable forms of energy.” So far, he continued, his house is always warm in the winter and cool in summer months.
Lima says he and his family decided it was time to put up solar panels once they were spending a combined $2,000 a month on electric bills for their farm and an adjoining 206 acres he purchased from a neighbor in 2018.
An underground network of wires runs from the strategically placed solar panels behind his house to a control box that shows him how much power he is using and how much power he is selling back to the utility company. His power bills have been zero for the last 11 months, he said.
“We’re now into this about 11 months and it’s been a pure success,” he said. “It’s a good deal, and of course it’s renewable energy, which is what we all should want to do,” Lima said.
Lima said his daughter’s home will also have a geothermal energy system and they’ll work together to figure out how to install a solar system there as well.
“I was a Trump supporter,” Lima pointed out, “but one thing I was not happy with about Trump was he was not pushing hard enough for renewable energy. I think it’s very important for our country to have renewable forms of energy at the same time that we have fossil fuels so that we can make a very gradual transition,” he said.
“The next big thing will be batteries, where they get sophisticated enough so that you could put batteries out here and the solar can also charge those batteries, and so eventually, the batteries can run my farm for a couple of days,” he said, noting he expects that technology goal may still be five to 10 years away.