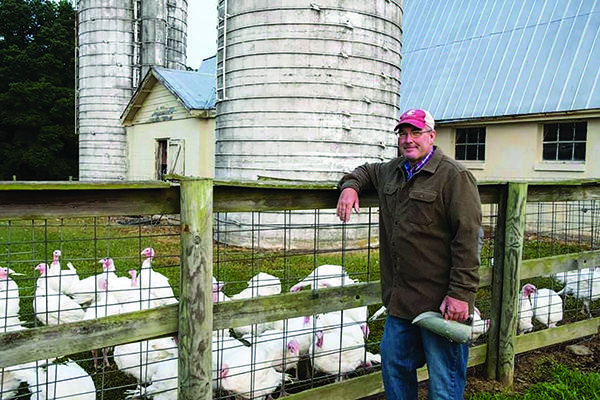 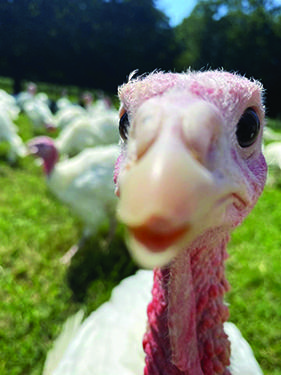 J.B. Debnam said they added turkeys to his family’s Pond View Farm “because we were looking for a new crop to add to our operation. We saw the market demand for locally-grown fresh turkeys in our area.” (Photos courtesy Pond View Farm)

CHESTERTOWN, Md. — Thanksgiving turkeys are costing consumers more this year, the result of bird flu outbreaks and inflated feed costs, but in the locally grown arena, small-scale growers are still seeing strong sales.
This is the third year that the Debnam family has been raising turkeys at their Pond View Farm in Kent County, Md.
The family added turkeys to its farm, “because we were looking for a new crop to add to our operation,” said J.B. Debnam. “We saw the market demand for locally-grown fresh turkeys in our area. Our turkeys are sold under the Melitota brand name. This name comes from a small, nearby community in Kent County.”
In addition to turkeys, the Debnam family grows corn, wheat, and soybeans at Pond View Farm on more than 1,800 acres. Five generations of the family have been active farmers in the Delmarva.
Starting in mid-2020, the dairy barn at the farm was converted to raise turkeys. According to a statement from the family, “the old dairy barn has been filled with various projects over the years including pigs, sheep, goats, cattle, and even a very special donkey.”
To start selling turkeys, the farm used social media.
“We started on Facebook,” Debnam said. “Because of the COVID-19 Pandemic, all of the orders and payments were done online in 2020. We’ve kept that format for 2021 and 2022.”
In the first week of September, emails go out to previous years’ customers offering reservation opportunities,
“Our repeat business is quite good,” Debnam said. It’s in the high 80s, percentage-wise.”
The turkeys are processed elsewhere and brought back to the farm for either pick up or a limited delivery option to customers.
“Most of our customers pick up their turkeys on the farm in the days prior to Thanksgiving,” Debnam said. “Some buy just one turkey, while some customers buy multiple turkeys. We do deliver to Kent Island (in Queen Anne’s County) for one afternoon because about one-fourth of our customers are located there.”
This year, the Debnams raised about 500 turkeys.
“Normally, the turkeys would be free-range,” Debnam said. “But due to the avian flu, we didn’t want to take any chances. There was an outbreak of avian flu about 20 miles away. So, we’ve kept the turkeys in the barn with limited contact from us.”
The USDA reported the U.S. turkey supply is down 2 to 3 percent compared to 2021, but demand has remained steady. About 90 percent of Americans have turkey on their Thanksgiving table, the Virginia Poultry Federation said.
According to USDA, turkeys are about 23% more expensive than in 2021 as a result of inflation boosting feed costs and outbreaks of Highly Pathogenic Avian Influenza.
“In the turkey industry, 5.4 million turkeys have been depopulated because of HPAI exposure,” the USDA reported in July. “This is equivalent to about 2.5 percent of all turkeys that were commercially slaughtered for meat in 2021. While HPAI outbreaks in commercial facilities have diminished, losses that occurred in the spring have affected USDA’s turkey production forecasts for the remainder of 2022.”
The market forces have impacted small-scale turkey farmers like Debnam.
“We could have likely sold twice as many turkeys this year,” Debnam said. “By mid-October, we were sold out.”
Chris Sheppard who owns What the Farm in Virginia Beach, Va., with his wife Kelly, raises about 50 turkeys for Thanksgiving and has sold out this year, though that was also true last year. Sheppard said feed costs have been their biggest issue and have raised their price some but not quite enough to offset their increased costs.
Sheppard said they could easily sell more turkeys but in their regenerative pasture-based model, there is more to it than just raising more birds. The length of time it takes the turkeys to grow compared to other crops and animals and how they impact pasture land are big factors.
“Selling is not the issue,” he said. “If you use our model, a regenerative farm, you have to move them around and be aware of how that effects your land.”
Roy Flanagan’s family has raised turkeys for the Thanksgiving and Christmas holidays for decades, the last in the Virginia Beach area to grow what was known as “Princess Anne Turkeys.”
Each year, family and friends come to the farm the beginning of Thanksgiving week and process about 125 of their 225 birds for customers to pick up days later.
“I consider it a tradition I don’t want to see die on my watch,” Flanagan said.
Flanagan said they could sell “way more” than what they raise to meet local demand but expanding processing equipment and getting enough people to help at critical times of the year would be their biggest challenges.
“Our bottleneck is the processing of them,” Flanagan said. “We’re just maxed out.”
Turkey farming is big business throughout the three Delmarva states, especially in Virginia.
The USDA reported that 14.5 million turkeys were raised in Virginia in 2021. The value of this production was more than $345 million in 2021.
“The Shenandoah Valley and surrounding areas are one of the top turkey producing regions in the country with a rich history,” said Hobey Bauhan, president of the Virginia Poultry Federation. “Currently, Virginia ranks sixth nationally.”
Bauhan said as of its last survey in 2020, there were 287 farms — both grow-out and breeder farms — raising turkeys in Virginia.
“The turkey industry in Virginia employs as many as 4,931 people across the state and generates an additional 9,678 jobs in supplier and ancillary industries,” according to an economic impact study funded by the U.S. Poultry & Egg Association and issued by the National Turkey Federation in October. “These include jobs in companies supplying goods and services to the industry.”
According to the National Turkey Federation, total turkey production throughout the United States included 216.5 million birds raised in 2021; this represented more than 5.5 billion pounds.
“HPAI has impacted national production — 184 cases with 8 million turkeys lost,” Bauhan said. “Fortunately, Virginia turkey farms have not experienced HPAI at this point.