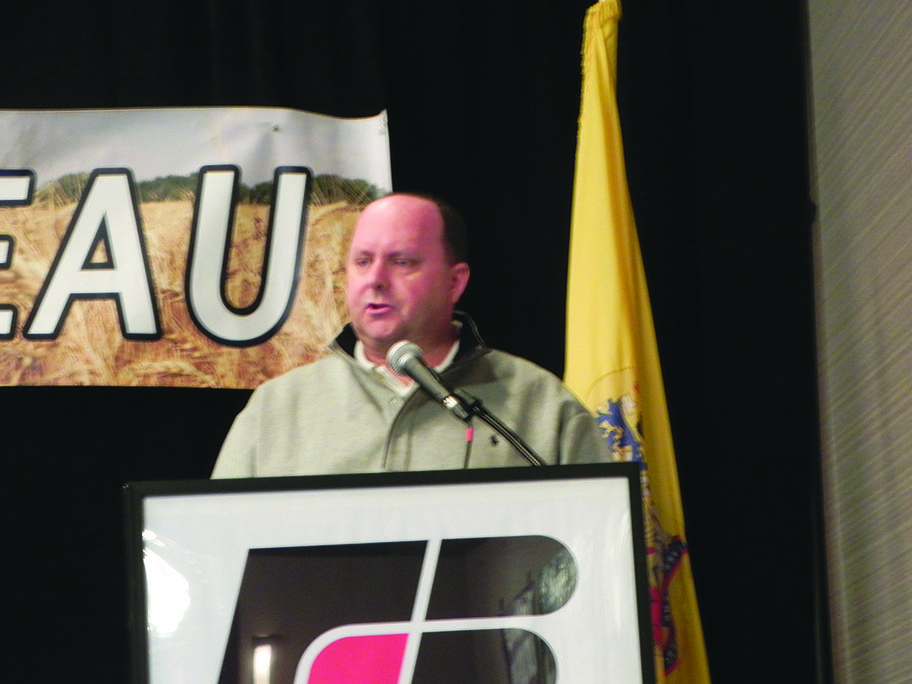 American Farm Bureau’s Cody Lyon presented a talk, “Advocacy in Action” last month. He covered some basic things farmers and ag entrepreneurs can do to ensure their voices are heard by lawmakers. (Photo by Richard Skelly)

WEST WINDSOR — Busy as they are and exhausted as they may be at the height of their respective seasons here in the Garden State, Cody Lyon from American Farm Bureau urged the state’s farmers to make time for themselves as citizens.
More specifically, Lyon urges farmers to make themselves available to tell their adventures and stories to lawmakers at the local, county, state and federal levels.
Lyon presented a talk, “Advocacy in Action” at the Westin Hotel on Nov. 15. He covered some basic things farmers and ag entrepreneurs can do to ensure their voices are heard by lawmakers.
Farmers can become opinion leaders themselves for legislators unfamiliar with various issues, and that a farmer can become a legislative staffer’s “go-to person” for more information on many different agriculture-related issues, he said.
Lyon has been with the American Farm Bureau Federation for 16 years and serves as director, of its advocacy and political affairs programs.
“My job is to monitor the trends, see what’s happening and see how you as constituents of lawmakers can be effective.”
Lyon said he wanted to focus on things farmers can do “to make sure you are in the right position and best position to engage lawmakers in implementing policies you want to see done.”
At AFBF, he and others rely on the state farm bureaus and their advocates to influence “policies we want to see done,” he said, quickly adding, “one of the most important things you can do is sign up for our advocacy program.”
Other proactive steps farmers and ag entrepreneurs and family farm enthusiasts can do include posting on FaceBook, Instagram and other social media, make phone calls, write letters and send e-mails, attend in-district meetings with legislators, contribute to political action committees, visit your state and federal representative at his/ her office or, “host a campaign event or an on-site visit or farm tour,” he said.
Farm tours or campaign events at a farm, Lyon said, “are unbelievably important in reaching the people who are making decisions on your behalf, so they can see, hear, smell and understand what you deal with on a daily basis.”
Establishing and defining relationships with local, state and federal legislators are among the best things you can do as an advocate, he added.
At AFBF, staffers work “to continuously enhance our alignment with state farm bureaus and enhance those relationships, who the state farm bureaus engage with, all of these things continue to change” he said, so they aim to stay on top of all these changes.
The bottom line, he said, is “we want to provide state farm bureaus with the tools and skills they need to remain effective and we want to make sure that you as advocates are the ones who are being heard.”
Lyon said all New Jersey farmers would do well to have some media training and savvy and argued that advocacy training is altogether different.
AFBF has about 375 to 380 “go team” members around the country.
These people, he said, are farmers and their families and staffers use social media to get the farming point of view out there to the general public and lawmakers. If you have a problem or issue and are able to get an appointment to see your state or federal representative, you should be prepared to stay on topic, Lyon said.
Lyon said aides to federal legislators in Washington complain to him and others at AFBF that farmers come into offices and they’re just not prepared to make their respective cases.
“Congressional aides have told us they come in and they go off topic and just aren’t prepared, so if [farming] advocates were better trained, we would have a better meeting and a better outcome from the meeting to understand. If you’re coming in to meet with a legislator about taxes or a Farm Bill, if you branch out to other topics, the staff gets confused, they don’t quite understand why you’re there to talk to them.”
He continued, “your job is to tell a personal story to support your argument; tell the staffers how they can be of assistance, what actions they can take.
“What’s the purpose? Because, on average, they represent 700,000 people, so what are your connections on that issue? That helps them sell it to other members of Congress as well.”
Meet with your state and federal lawmakers enough in their offices and explain your stories to them and you can become their go-to expert, he said, “or that person the Congressional staff will call when they have a question.”
Lyon also urged members to attend district meetings for their Congressional and state representatives, or, where possible, set up meetings at their offices or even offer to host these people at your farm.
“Have meetings,” he said. “Meetings on the farm, at the county farm bureaus, go to their district meetings, communicate with them, back and forth.
“If you’re not the one doing it, I can guarantee you, someone is, someone is getting time with that lawmaker and you need to be the ones who do that, so that they know who you are.”