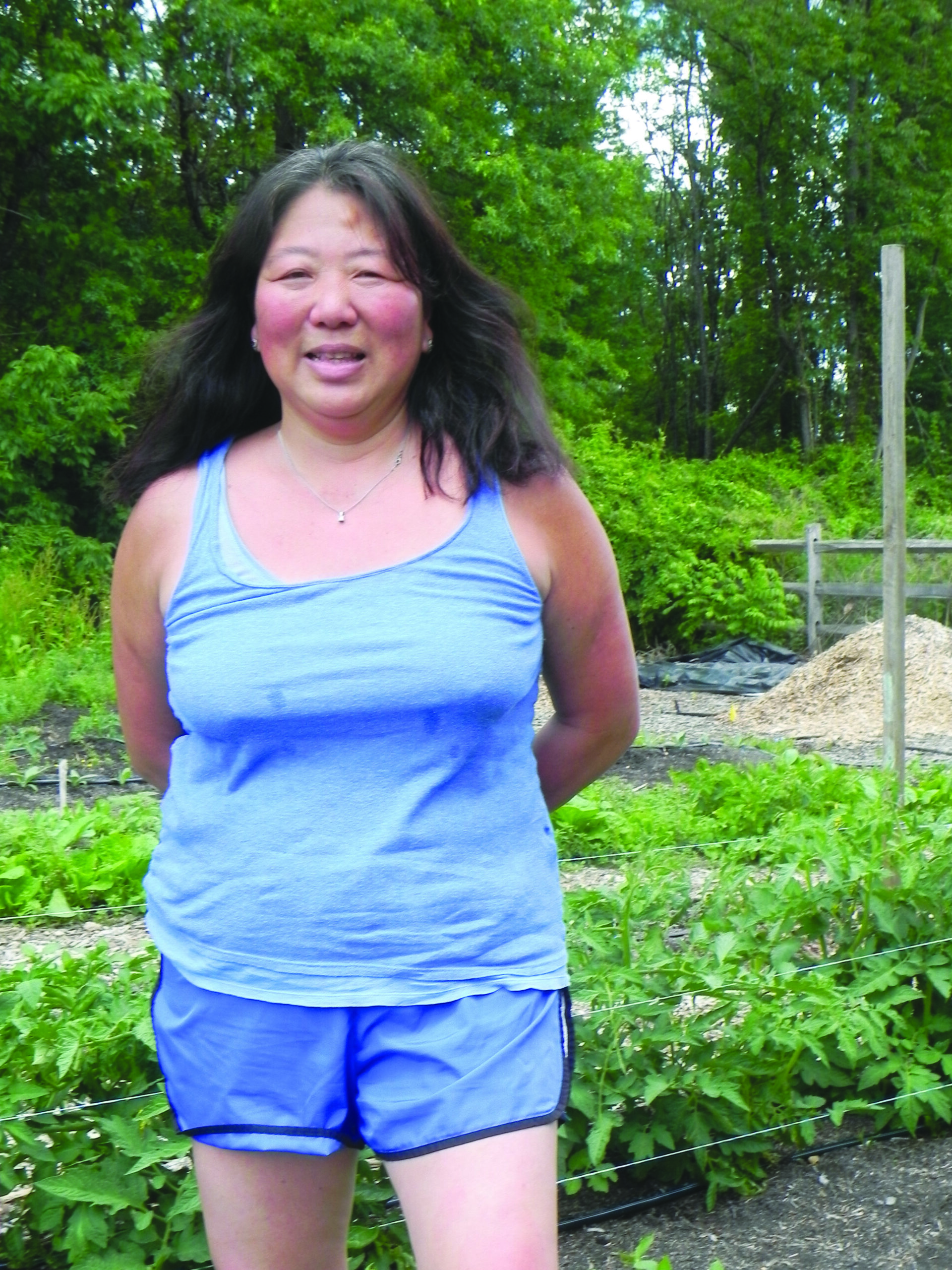 KINGSTON — Nagisa Manabe, the new executive director for the Northeast Organic Farmers Association’s New Jersey chapter, has a long and varied background in marketing, most of it in the private sector.
Manabe was raised in Princeton and attended Yale University before going to get her masters’ at Harvard Business School. She developed a passion for growing her fruits and vegetables through her mother, who taught Japanese cooking classes at the Princeton Adult School, among other places.
Manabe said her family goes back more than five decades in the Princeton area.
“We’ve always been involved in the food community here,” she said on the front porch of her house next to her 4-acre River Stoan farm in the Kingston section of Franklin Township, Somerset County.
“My mom was part of the University Garden Club and taught at the adult school, so I developed a lifelong interest in food,” Manabe said passion for teaching yoga led her to Stephanie Harris of Hopewell, one of the co-founders of New Jersey’s organic farmers group, which now has more than 400 active members. Harris was one of her students when Manabe ran a yoga studio in Kingston.
After the studio closed in 2016, she urged her more dedicated students to come to her house to continue their practice on Saturdays for free. Harris was among them, noticed Manabe’s interest in growing specialty vegetables and suggested she get involved with NOFA-NJ.
“I became interested in organic farming because you cannot get unique varieties of organic produce in stores, it’s all very limited,” Manabe said, “If you want Japanese radishes, Asian greens of various kinds, or a variety of Japanese scallions, you can’t find them. If you can get one variety of Japanese scallion in a grocery store here, you’re lucky.”
So she and her husband, Dr. Oscar Schofield, department chairman at the Rutgers Center for Ocean Observing Leadership, began growing their own Japanese vegetables.
“We began by growing it for ourselves; over time, as more people inquired about it, we found we could sell them some of our Japanese produce.”
She said they named their farm River Stoan to include husband Oscar, and children, Samantha, Tobias and daughter Nagisa.
Manabe ran a successful organic CSA program out of River Stoan Farm until last year when she knew she would be taking the reins as executive director at NOFA.
Manabe has wide-ranging experience in marketing and sales. Prior to joining NOFA-NJ as its new director, Manabe was head of marketing and development for Godiva Chocolatier NA and a global president at Ipsos, a leading consumer research company. From 2012 to 2015, Manabe was chief marketing and sales officer for the U.S. Postal Service, leading a 1,600-person department and reporting directly to the Postmaster General. She began her marketing and sales career in 1991 at Procter & Gamble.
Manabe took a visitor on a short tour of her acreage, which featured neat rows of crops growing out of neat piles of clean wood chips. Wood chips help to retain moisture as well as keep the weeds down, she said.
“Mostly we’re growing berry plants and for personal use and friends we’re growing Japanese vegetables,” she said, walking among rows of beets, Idaho and red bliss potatoes, broccoli, radishes, beans, a variety of heirloom tomatoes and even some Japanese rice.
“You would think you’d have to grow rice in a rice paddy, but not so,” she said. She gets her wood chips untreated from a friend in the tree business, she said.
She is also working with peach trees, paw-paw trees, walnut trees and fig trees.
“My husband works very hard at Rutgers and now so do I for NOFA-NJ, so I had to give up our CSA operations last year.”
After “retiring” from the corporate world, she took it somewhat easier, began growing her own vegetables and fruit trees and started her Simply Yoga studio in the nearby Kingston shopping center on Route 27. Harris prompted her to get involved with NOFA-NJ and she did. She got involved on the NOFA-NJ board of directors in 2016.
“Basically I worked in marketing from 1991 to 2015, about 25 years,” she said, “all of these companies were good to me and I had a fun time, but the truth is, at that age, it was time to retire,” she said.
“Marketing is a profession for youth; most great marketing ideas come from really young, energetic, clever people who come up with things that resonate with a large percentage of the American public. So once I retired, farming seemed like a great thing to do.”
“What you learn about marketing is no matter how small or how big your organization is, it’s really a business of word-of-mouth,” she said, “great marketing is all about people telling each other here’s a great new opportunity here’s a great new idea and people trying it out and adopting it. It’s true for the drinks business, you learn about great drinks in bars and you learn about great food ideas in restaurants.”
Asked about her plans for NOFA-NJ, Manabe said there’s a wealth of talented smaller farmers among its 400 plus members.
These younger farmers, are also tech savvy and collaborative, she added, “so they work with each other to grow good produce and get it all over the Garden State. It’s a really exciting situation.”
What she and others have discovered in recent months, she said, “as hard and horrible as this pandemic has been, it’s been waking up many of our communities to the power of local, organic farming.”
“Who wants to eat a strawberry that was picked barely ripe a week ago in California versus having something right around the corner? Let’s face it, things that are vine ripened taste better.”