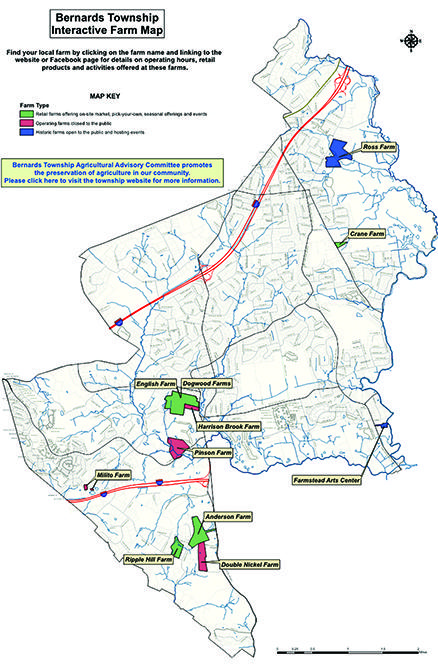 A map, found at https://www.bernards.org, indicates five farms that are open to the public in Somerset County.

BERNARDS TOWNSHIP — The Agricultural Advisory Committee has been helping farmers in this affluent Somerset County township since 2005.
It was originally formed to obtain Planning Incentive Grants to assist farmers in preserving their land — but after a number of farms were preserved, interest waned and the committee decided to move in another direction.
Tyler Seville, chairman of the committee, moved to the township three years ago and realized he was unaware of how many farms still exist here and how many are open to the public and he figured other people moving into the township might feel the same way.
The answer, he decided, was to create an interactive map showing the farms that are open to the public, those not open and the two historic farms that present seasonal events.
There are 54 farmland assessed properties in the 24-square-mile township with 1,125 acres operated or preserved as farmland.
The map, which is on the township website, indicates the five farms that are open to the public: Anderson Farm on Martinsville Road; Crane Farm on South Maple Avenue; Dogwood and English farms on Valley Road, and Ripple Hill Farm on Mountain Road with links to their websites.
Harrison Brook Farm, also on Valley Road, is not open to the public, but the map has a link to its website.
In addition, three other farms not open to the public, Milito, Pinson and Double Nickel farms, are on the map without a link.
The two historic farms, Farmstead Arts Center on King George Road and Ross Farm on North Maple Avenue are also on the map with links.
“When residents see the map, they comment they didn’t realize how many farms are here,” Seville said, adding “they like to know which ones they can go to for products.”
A blown-up version of the map was featured at the Agricultural Advisory Committee’s table on Charter Day, the township’s spring festival.
Seville said the map is made available to real estate agents in the area as well.
They can use it to point out farms and farm stands like they do other businesses prospective new residents might be interested in knowing about, he noted.
While he acknowledges the state and counties do a good job of publicizing farms, Seville thinks it would benefit other municipalities to create a similar interactive map.
He sees it as the next reasonable step for the advisory committee, after land preservation was less urgent in the township.
“We saw an opportunity to pivot to support farms economically as well as with land preservation,” he said.
In addition to the map, the committee plans on issuing some sort of quarterly communication to update residents on the status of the township’s farms, what they are selling and what events may be planned for the public.
In a press release issued by the committee, Seville noted connecting residents to the farms can encourage agritourism and educational activities on the farms, such as hayrides, pick-your-own produce and farm tours.
Seville doesn’t come from a farming background, but his childhood in rural Burlington County provided him with plenty of opportunities to observe farms. He also has cousins who raise citrus fruit and sheep in California, he said.
The map can be found on the township website: www.bernards.org.