Marketer has himself in quite a pickle 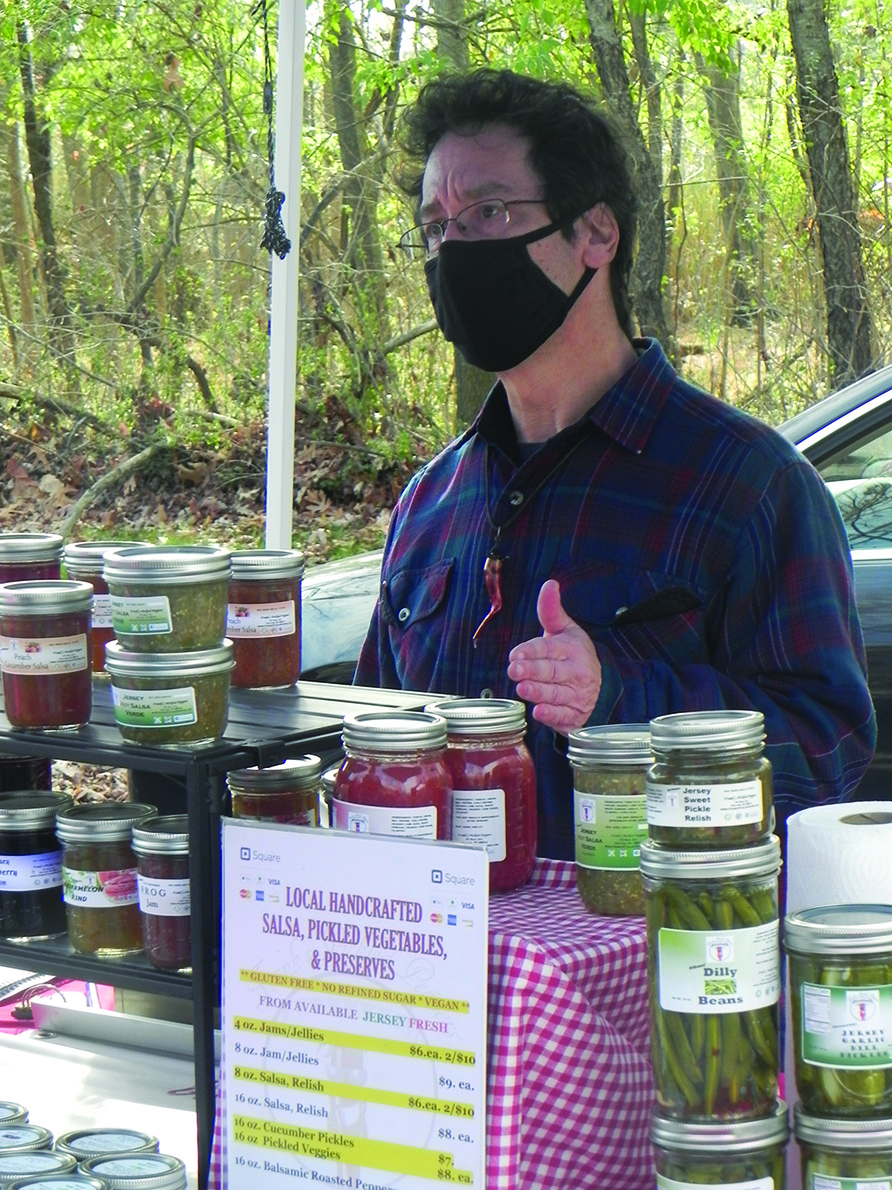 SOUTH BRUNSWICK, N.J. — Heady with success from awards he won for canning at the Middlesex County Fair a decade ago, Frank Schlesinger launched his pickled peppers business. He wasn’t sure what to expect, but said he was ready to work hard.
“Middlesex County Fair has the canning competition every August, and over the span of about five years, I began with some salsa and then some pickled peppers and finally won a first-place prize with some relish,” he explained on Nov. 21 at the West Windsor Farmers’ Market.
“To make a little extra money out of high school, I began working in a restaurant and eventually worked my way up to line cook,” he said.
Schlesinger grew up in Maplewood and went to engineering school at New Jersey Institute of Technology. He bounced around in the corporate world as an electrical engineer in the 1980s and met his wife, Elizabeth, a social worker, in the 1990s.
“I always liked to garden. After my wife and I got an apartment in South River, the guy next to me was growing container plants in his apartment. He was leaving, and he had some pepper and tomato plants that he gave me. By the end of the season I had more produce than I could use.”
That led him to the next logical step, canning the peppers and tomatoes.
With his wife’s support, Frank’s Pickled Peppers is now at the point that he’s considering renaming it, to better reflect the range of jams, jellies and chutneys he produces at a commercial kitchen in Ewing Township.
“I’m thinking either ‘Garden State’ or ‘Middlesex Canning,’ perhaps.”
Schlesinger sells his canned creations every Saturday morning at West Windsor Farmers’ Market.
He began canning in earnest after he and his wife Elizabeth moved to a single-family home in the Dayton section of South Brunswick. He launched Frank’s Pickled Peppers in the spring of 2011, working out of the charity organization’s Elijah’s Promise soup kitchen, a commercial kitchen in New Brunswick.
“I figured if the judges at the county fair liked my product enough to award ribbons, there must be a business opportunity here. I began making baskets for friends and family, and entering in small holiday craft shows. The baskets would include salsa and relish.”
At first he was doing large jobs of pickled items, but in recent years he’s expanded into jams and jellies. His product line includes pickled peppers, salsa, a salsa verde’, green pickled relish, Sweet Jersey corn relish, pickled beets, tomato free salsa, salt and sugar-free products and more recently, jams and jellies including jalapeno-spiced jellies. He also makes pick-a-lilly relish, a cucumber-free relish with peppers, cabbage and tomatoes.
One of his most recent additions to his product line is frog jam.
“We were coming back from a trip down South, and saw these signs for frog jam. I finally figured out what this was,” he said, “with my frog jam I say no frog was harmed during the making of this jam; it’s made with fig, raspberry, orange and ginger, which is how they get the name frog jam.”
“I like to take different areas of the country where certain vegetables are popular and create products from them,” he said, “things like hot pepper jam.”
Like any farmer looking to improve, he listens to his customers.
“After I hear a third request, I’ll find a way to add it to my product line,” Schlesinger said.
This year he was approached by a couple of different farms who wanted to sell value-added products through their farm stands, but had no access to a commercial kitchen.
“So I would take their product to the kitchen and make up what they wanted me to make, deliver to them, invoice them, and then they’d sell it through their retail store.”
He began working with area farmers like Gabe Siciliano at Abe’s Acres in Hightstown, Christine from Krowicki Farms in New Egypt and Mike Rassweiller at North Slope Farm in West Amwell to create value-added products for them, using their produce.
“Now we have a number of farmer-vendors here who are collaborating with me to offer value-added products through their CSA programs,” Schlesinger said.
He credits his commercial kitchen, Something Special Kitchen and Commissary in Ewing Township and his wife, Elizabeth Schreiber, for allowing his business to expand to the point that it has, as well as those judges in 2011 at the Middlesex County Fair in East Brunswick. He also credits his daughter Rachel, who helps him out with bigger projects at the kitchen in Ewing.
“It used to be, my goal at the farmers’ market was to see how much I could sell to the public,” he related.
“Now, most of my income is coming from the value-added products I do with farmers. Now, I’m just trying to keep up with demand.”