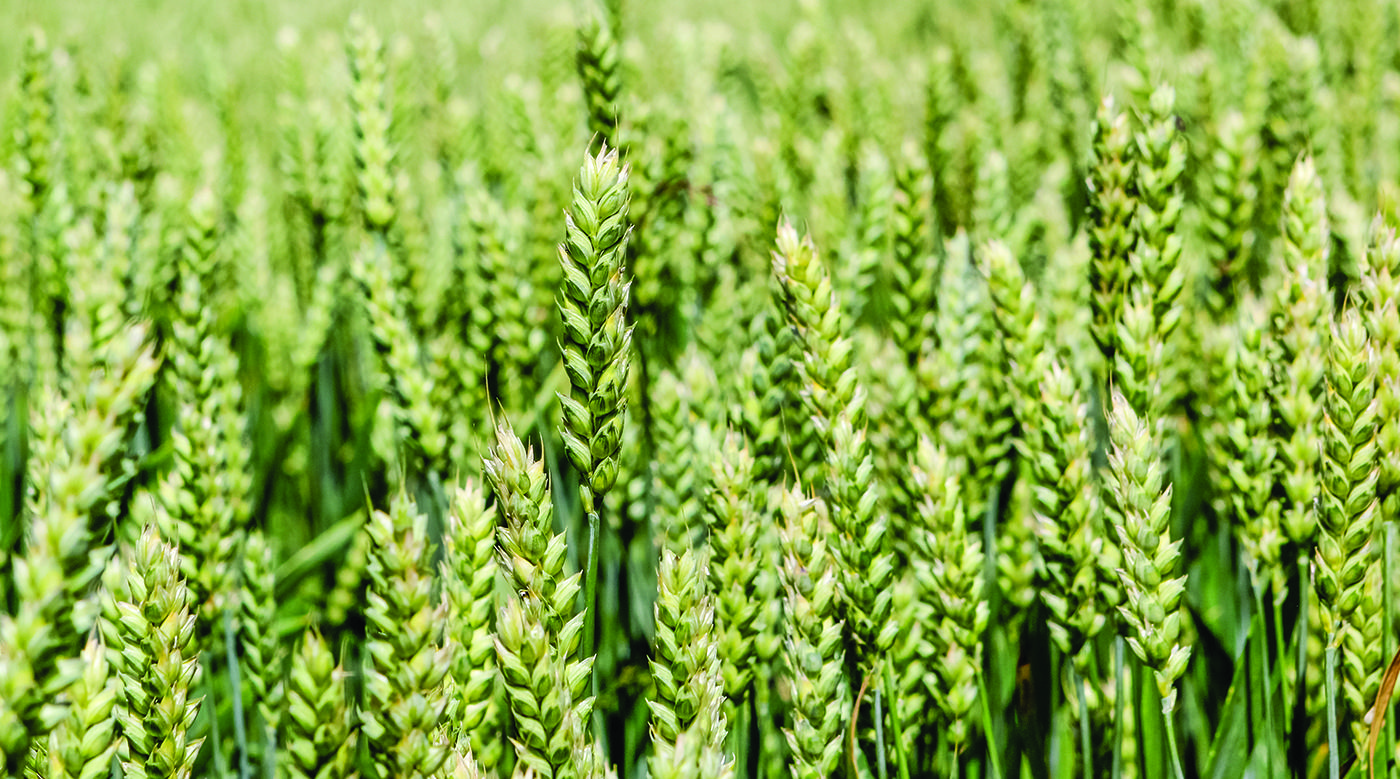 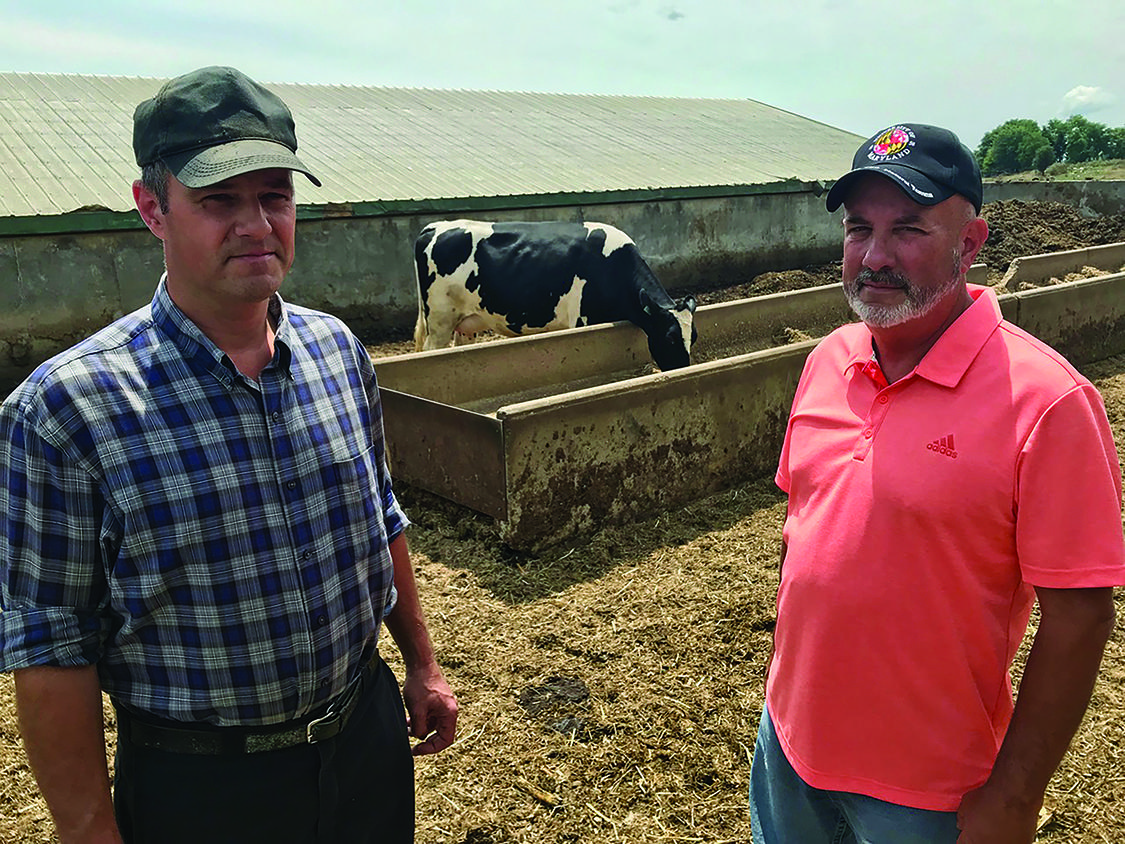 Lyndon Miller, left, of Smithsburg, Md., is part of a group of dairymen working with Jeff Semler, right, a University of Maryland Extension agent, on a study of soil fertility and its affect on triticale yield and protein. (Photo by Jonathan Cribbs)

SMITHSBURG, Md. — Two years ago, Washington County dairyman Lyndon Miller quit planting alfalfa entirely. He was getting older and growing tired of the crop’s multiple cuttings, and at some point he learned that alfalfa’s forage quality declined considerably when the weather got hot. He began growing more triticale, an increasingly popular wheat and rye hybrid, and noticed an improvement in his herd’s productivity.

“I started getting a little more milk, and I felt that it was somewhat due to the triticale silage,” he said. “I would say (the motive to change) was a mix of chasing profitability and convenience.”

As the dairy industry’s tightening economics strain the state’s farms, and triticale varieties improve and become more flexible, more Maryland dairymen over the last several years are embracing the crop. The University of Maryland Extension, piggybacking on recent triticale research by Cornell University, has been studying the effect of soil fertility on the crop’s yield and quality in an effort to help the dairy community. If the state’s dairy farmers can boost protein in triticale, they’ll have another highly digestible forage option for livestock, reducing their dependence on purchased feed such as soybean meal.

Due to its digestibility and ability to thrive in droughty, low-fertility soil, triticale has been gaining popularity among livestock producers worldwide. North America is one of the crop’s fastest-growing markets, according to Mordor Intelligence, an Indian market-intelligence firm. The company projects the global triticale market to grow by nearly 3 percent each year between now and 2026.

At the Extension’s dairy field day last month, Amanda Grev, an Extension forage and pasture specialist, cited cost savings identified in Cornell’s research as one of triticale’s main attractions, despite the cost of increased nitrogen. Grev is managing the Extension’s study with Semler.

“The additional cost of that extra nitrogen (at Cornell) was around $60 per acre, but if they were to supply that same amount of protein through an alternative source, like soybean meal, they’d be spending upwards of $200 based roughly on current prices,” she said. “So you’re basically looking at a three-and-a-half-times return for the investment of that additional nitrogen.”

But boosting triticale’s protein in a heavily regulated state such as Maryland is a complicated proposition. In a study conducted by the Extension over the last year, researchers were permitted to exceed the state’s nitrogen limits. They applied up to 150 pounds of nitrogen per acre, hoping to boost yield and protein.

The added nitrogen boosted yields above controls, but increasing the nitrogen rate did not significantly improve yields. Crude protein, however, did rise. Protein in control crops was 8 percent, but when the nitrogen rate rose to 150 pounds per acre, the crude protein topped out at more than 18 percent.

Due to the state’s fertility restrictions, triticale is typically producing about 16-percent protein on most fields, Semler said.

The Extension also performed soil nitrate tests after harvest and found that nitrates in the soil were generally less than 10 parts per million, even with the highest level of nitrogen supplementation — well below state limits. Eventually, Semler said, the Extension hopes the research encourages state policy makers to reassess nutrient limits in this situation.

As triticale varieties improved, “we went from basically a Volkswagon Beetle to a Mustang, but we haven’t improved our fuel. We have a product that can do more, but we’re not feeding it enough to do more,” Semler said.

The Extension is also starting a dairy-cow feeding study this month, he said. The study will analyze triticale’s effect on feed intake, bodyweight, milk production and milk components, which together represent the bottom line for dairy producers.

“Let’s say that 200 pounds of nitrogen gives us the best result,” Semler said. “If it’s not economical it doesn’t matter.”

Triticale’s benefits also go beyond protein, he said. The crop is an added opportunity for dairy farmers to apply homegrown manure before planting and after harvest — another bottom-line benefit — and the crop’s less complicated harvest is preferable to the labor intensity and cost of alfalfa, another popular forage, as Miller found.

In addition to reducing some of the labor he used to spend on alfalfa, Miller estimates that fully embracing triticale boosted his herd’s milk production by about 15 percent.

“I can test it, and I can test it three months from now, and it’s going to test very similar to what it was now, whereas alfalfa you had first cutting, you had second cutting, and you had to be adjusting the ration a little more often,” Miller said. “Cows like consistency. They want to eat the same thing today as they ate yesterday.”