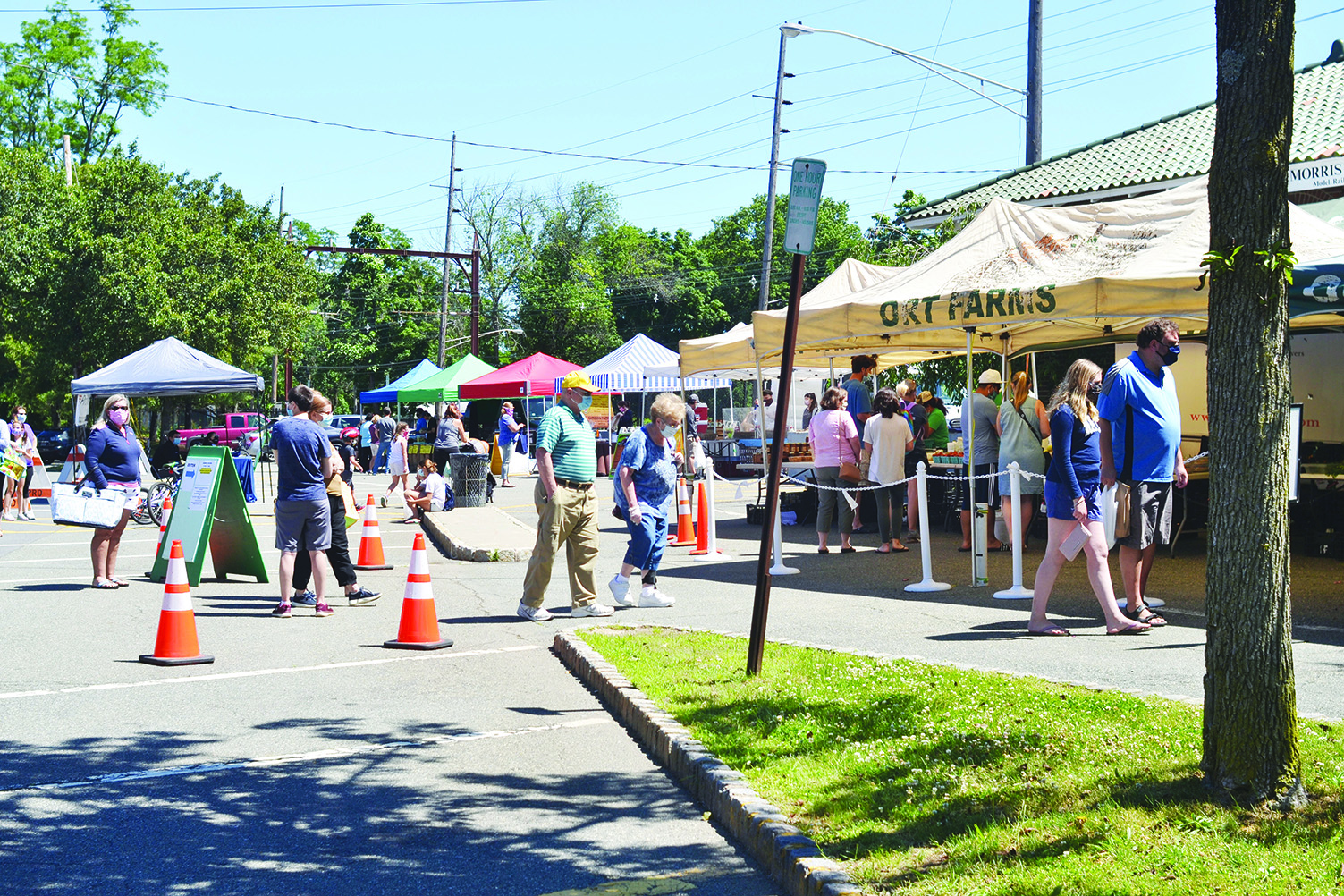 Dozens of patrons line up for the Ort Farms tent at the Morris Plains Market last month. (Photo by Jane Primerano)

WASHINGTON — There was music in the air over Washington Borough on Saturday, June 20, for the opening day of the borough’s farmers’ market.
Like other years, farmers and other vendors were set up in the parking lot off Washington Avenue, but there were differences. Dove Environmental Services prepared kits for children to take with them rather than doing a craft with the children.
Vendors wore masks and the tables were farther apart than usual. But, as they do every year, Harry and Bob Noble pulled together a band, this time including North Jersey music mainstay Grover Kemble, and greeted the opening of the season.
Melanie Thiel, executive director of the Washington Business Improvement District was pleased with opening day.
“Everyone is happy to be out of the house,” she said.
Customers were buying, respecting social distancing and enjoying the entertainment.
The Warren Hills Blue Streaks FFA chapter was selling items as one of their fundraisers. Diana Dove was selling pollinator plants as a fundraiser for the Karen Nash Memorial Butterfly Garden at one of the borough elementary schools.
Those two tents were in the pocket park. Other vendors were on the parking lot.
Vendors were pleased with the kickoff in Washington as they were at other farmers’ markets in the area.
Morris Plains’ market opened the week before Washington. Vendors lined up near the railroad station and customers were lined up to purchase produce from Ort Farms tent.
Sue McCloskey, a former borough councilwoman and the market manager acknowledged things are a little different this year.
“We had to wait because we didn’t know the rules,” she said. But the usual vendors came back and many customers walked or rode their bicycles through the compact borough to shop.
McCloskey said Orts started delivering market boxes to the borough public library two months ago. Customers order online.
Customers like the fact they are getting fresh fruit and vegetables that are only touched by the people on the farm, she said. “They (Ort’s) had to figure out something. There is so much the restaurants aren’t buying.”
Ort’s provides a breakfast box, a bar-be-que and other options, McCloskey said.
Chester’s market began its season on Father’s Day.
The big vendor is Stony Hill Farm which is right nearby. Craig Fredericks said he has been coming for eight years.
The first four years were in the center of the borough, which he liked, but there was always limited parking that had to be shared with the merchants. At Gazebo Park, there is plenty of parking and lots of space for people to picnic or walk their dogs.
Only five vendors were at the first day, but Fredericks said he said more would come back. His biggest concern is that the vendors are used to getting after-church traffic from the three local churches. Since religious services are online now, those customers may not come.
Fredericks thinks the market needs more publicity, but he is optimistic people will be looking for an excuse to be outside.
Madison’s market is on Thursday evenings, a time that has worked well there, although other markets have moved away from weekdays.
Elizabeth Monkemeier, an intern with the borough enjoys her one day a week working outside rather than in an office.
She was sitting at a table at the entrance checking for masks and spritzing customers with hand sanitizer.
She said the customers were willing to wear a mask and get a spritz just to be outside their houses.
The market this year is on Dodge Field, just down Central Avenue from its original venue which was on the closed-off street, which wasn’t always popular with merchants.
There is plenty of room to space the vendors a healthy distance apart.
There are about 18 vendors each week.
A pop-up market at Well Sweep Herb Farm was a highlight of Saturday, June 13.
Well Sweep owner David Hyde said the farm has an ongoing relationship with Hackettstown restaurant James on Main so when the restauranteur suggested bringing a tent and cooking lunches for people to picnic at Well Sweep, Hyde agreed.
Hyde’s nephew, Patrick McDuffee, was running the pop up market.
“It’s busier than we anticipated,” he said.
Lines for food reached the parking lot and many families found a spot to picnic on the grass.
James on Main will return for the July 10, 11 and 12 open house at Well Sweep, he said.