McAndrews loyal to past, embracing the future 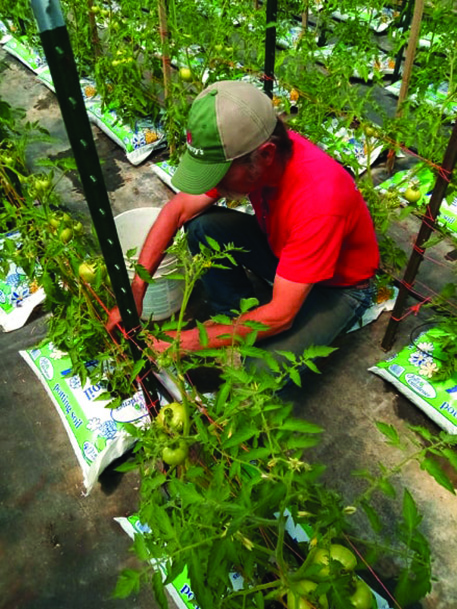 John McAndrew prunes one of his tomato plants at Miller’s Hill Farm. (Photo by Steve Sears)

MENDHAM — “It keeps going,” says Ruth (MIller) McAndrew Farm.
Since Ruth’s father Ted died in 1986, John McAndrew III has always approached things by asking himself, “’What would they think?’ I married into it. I just wanted to honor and do right by them.”
Miller’s Hill Farm, originally purchased and developed into a dairy farm in 1924 by Theodore and Ruth Miller, is now preserved (86 of the 93 acres) farmland.
The original barn has been updated and restored, two greenhouses have extended the growing season for the farm, and a third greenhouse for raised beds and greens production is planned for the future.
A complete history and information of the farm, which is located at 10 Combs Road, can be found at www.millershillfarm.com.
“When we got married, there were Angus cows here,” says John. “When her father passed, we essentially inherited the herd, and working full-time — raising children and working full-time — and trying to make hay, trying to keep fences up, we were putting a lot of effort in here, essentially keeping farmland assessment, generally keeping the farm a farm.”
Maintenance was getting ahead of the McAndrews, so they delved deeper into produce. “I got an interest in gardening from my grandmother, who actually grew up on a farm in Haledon if you can believe that,” John says. “That was back in 1910.”
The McAndrews, for a couple of years, did a seasonal small stand up the hill on South Road, in a field that is still property of the farm, and the idea took off.
Money made went into renovating and repurposing in 1999 the former blacksmith shop into a store.
Ruth’s aunt, Ruth Dorney (Miller), is the last of the second generation. “She’s the oldest of my grandparents three children.
“They had three children: Ruth (Dorney), Ted (my father) and Emily (Cyrier).” Ruth McAndrew is a third-generation farmer, the McAndrew’s children the fourth, and granddaughter Shannon is the fifth. Up until a few years ago, John worked various part-time jobs (and still is a volunteer fireman for the Ironia Fire Company and instructor at the Fire Academy) in order to keep the farm going, but now officially lists his occupation as “farmer.”
He said he likes the title better.
“There’s a certain pride factor that comes with that. A certain sense of accomplishment,” he said.
“She’d like to take the field on South Road that is full of rocks and she’d like to turn it into an orchard,” Ruth says of her granddaughter, Shannon McNulty. “She’s kind of rough around the edges, has a spark to her. She’s only 10, but she’s a good thinker.”
Shannon enjoys growing zinnias and marigolds in the 1 1/2- acre field. She wants a future orchard there, though, for apples and peaches.
She also enjoys visiting the pigs and baby chickens. “The black ones (cows) are boys, the two browns ones are girls,” she says.
The current COVID-19 pandemic has improved business at Miller’s Hill Farm.
They opened the store early in 2020, in March, and customers have visited for fruits and vegetables rather than head to the supermarket.
The farm grows tomatoes, blueberries, and corn.
There are 564 tomato plants in the first greenhouse, and the blueberries are about a month from being truly ripe.
“They’re getting bigger; these (the plants) have been here around 15 years. Some varieties do better than others. I have about six varieties here,” John said.
Ruth adds, “I think during this pandemic the most important thing we can do is go back to the land as much as you can. Go back to local: eat clean food. We all have to get healthy to fight it off.”
The property itself has been worked since the 1700s.
The original and oldest building on the property was built in 1735, the addition to the house around 1800.
When the Millers initially moved here in 1924, there was no water or electricity.
John loves to share his wisdom about how tomatoes grow, the wonder of a seed and the job it does, and about Miller’s Hill Farm history.
“I would rather have people ask me about what was here. To me, preserving what was here, and preserving the history, means more. We have something special here. I want to be very humble and I’m very aware, and I call it a gift that her family has allowed me to operate this place. So, I want to honor all the effort that was put into this because I understand all the effort I’m putting into it. There was a man who took this place and built the front porch, built this back room, put plumbing into this, created a dairy farm. There was another generation that came in and got farmland assessment, bought another piece of property and did all this, so I know the work that went into it, and I would just love to have a conversation with people. I want people to come here and say, “This is a piece of history. This is an old house. This is an old barn; this is pre-revolution.”
“I think we do,” says Ruth when mentioned she and John have something special in Miller’s Hill Farm.