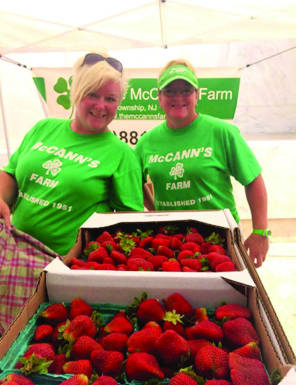 MONROEVILLE — Anita McCann and Nancy McCann Foy both recall the day.
McCann’s Farm sells everything to consumers at farmer’s markets. Via these venues, they meet regular customers.
One customer in the mid-2000s would often visit to buy some fruits and vegetables. Soon after, he learned his wife was pregnant, and told the sisters that his wife wanted to start eating healthy, and that they relied on the ladies for their fresh produce. His purchase quantity increased.
“That little boy is 15 now,” says McCann. “Oh my gosh! Since before he was born, we have fed that kid! That’s such a good feeling; to know that pieces of fruit we’ve grown have nourished someone’s whole life.”
McCann’s Farm is 60 acres of tillable land, and this includes about 40 acres of corn, and 16 acres of a variety of vegetables.
The farm’s biggest income maker are the before mentioned farmers’ markets in Philadelphia, especially the Roxborough Market, where McCann has been for 14 years.
“It’s way more than a job,” she says. “We wouldn’t be doing this if it was a job. It’s too hard.”
The McCann’s Farm was started by the sisters’ grandparents, Edward and Margaret, in 1951, and it is entering its eighth decade. McCann and Foy’s dad and uncle, Tom and Edward, then had the farm passed to them.
Tom McCann died on March 17.
“He loved country music,” says Foy of her dad. “Kenny Rogers. And we were all — friends, family — we were like, ‘You picked a fine time to leave us.’”
“Usually every February, Dad and I (would) start our work in the greenhouse — together,” McCann says. “Dad had surgery in February, and then he had a stroke in the beginning of March, and he died March 15. So I was a little late in starting in the greenhouse, which ended up being a blessing because if I would have started all my seed on time, Nancy would’ve had it in the field two weeks earlier and we would’ve lost a lot to that frost (in May).”
Neither McCann nor Foy remember their grandfather working on the farm — he died from a heart attack long ago — but he watched Anita when she was a child.
“We walked through the woods, and he would show me the dogwood trees and the different holes and say, ‘This is probably a fox; it’s a groundhog hole but a fox took it over.’ Pointing out the birds and the different sounds of the farm.”
He also explained to McCann that, “There’s one good thing that every single farm has every day, and that’s fields.” When she asked him why, he would say, “Every single farm should have its farmer’s shadow on his field every day.”
“If your shadow is on your field, you’ve checked it,” says McCann, echoing her grandfather’s wisdom. “You’re out there. A lot of farmers have their workers check the fields, but he said, ‘A good farmer has his shadow in every field.’ You should be the one out there working in it.”
COVID19 was a huge challenge, and the sisters operated their farm to try and be as safe as possible.
“The greenhouse, which is actually where we begin everything, that’s behind where Anita lives. In talking about COVID, we actually separated our families. Anita worked in the greenhouse, she started off the seeding, and we worked separately. When it came to planting, what do you do? Sit next to someone you haven’t been around? So, the entire farm I planted by hand.”
“We wanted to be as safe as we could.”
McCann’s Farm, which is open through October, canceled many events this year. The Easter Bunny and Easter flower sales never happened, and neither did the annual Mother’s Day Planting Day nor the Pepper Festival.
Most likely, fall wagon rides and pumpkin picking may meet the same fate. Also, the initial summer storm in June blew down one of the greenhouses, it recently restored in August.
All of the above said, the sisters forge on. “Our approach is,” adds Foy, “that we didn’t get that greenhouse covered for weeks, and it looked like hell, but we’ll get to it. I mean, you can’t sweat things.”
“Nancy and I have a philosophy,” says McCann, “that everything happens for a reason. And there’s a reason all of this happened, and that we all make it through.”
Yes, Anita McCann and Nancy McCann Foy go at it with the same enthusiasm as always. McCann says, “When people come over to the farm, they’re like, ‘Oh yeah, I want to come help you work on the farm,’ and then they’re out there for an hour, and then they come in and day, ‘Oh, man, this is really hard. How can you do this?’ We say, ‘You just do it.’”