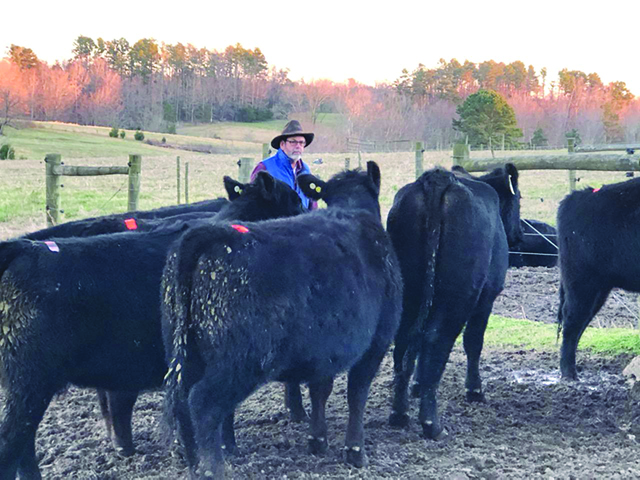 VERNON HILL, Va. — Family, farming and faith are all factors Mike McDowell attributes to his success as an Angus seedstock producer.
McDowell, one of two producers to receive the Virginia Cattlemen’s Association 2020 Seedstock Producer of the Year Award, outlined these keys to his life in a recent telephone interview.
He talked about his 44-year marriage to Wanda, his high school sweetheart, and their children, learning early in his life about farming from his father, learning how much records matter in the cattle business and the realization that the Lord has been involved throughout his road to success. In addition to farming, he is a full-time pastor.
They are the parents of two daughters and a son; Angela Collins and her husband are both veterinarians; Bridget Brown and her husband are both dentists; and son West is an emergency room physician married to an optometrist. All live and work in their home county of Halifax, Va.
Prior to going off to college, he said, he worked with his father in a sharecropping tobacco and small grain operation. He is the fourth generation on this family farm.
McDowell said he developed an interest in genetics in the mid-1970s. At that time his Locust Level Farm was home to Herefords but he noticed a trend in what buyers wanted.
“People were asking for black bulls,” he said. “If they want black cattle, I decided I’d make black cattle.”
About the same time, he saw how dairy farmers used records, making decisions based on that data and developed a similar strategy.
“I decided performance was important,” he said. “I kept records. In the beef industry, a lot of selection was based on show phenotypes but we went with performance.”
This approach was ahead of the management trends of today when so many performance tools are available to cattlemen because of careful record keeping and sharing of genetic information.
McDowell said he started using artificial insemination in the late 1970s. For the past several years he has used AI only for breeding.
“We have multiple generations of highly proven bulls,” he said. “We’ve utilized embryo transplants since they were first largely used in the U.S. We used and embryo transfer to build our genetics.”
McDowell has worked with BCIA and did performance testing of his whole herd at Red House. He was instrumental in developing the first Virginia Finest Bull Sale in Abingdon.
At Locust Level, McDowell runs about 160 momma cows on about 1,000 acres in a total grass operation. McDowell described his farm as being intensely fenced so he can do a lot of rotational grazing.
He said that a lot of this acreage is in fescue, but he is transitioning some of the pasture to endophyte novel fescues. He said he also plants some summer annuals including root grass, millet, Sudan grass and radishes.
The farm has been recognized as a Virginia Clean Water Farm for its efforts in stewardship and conservation.
In October 2019, he was named Southeastern Farmer of the Year after winning the Virginia Farmer of the year earlier in the year.
McDowell said he was getting in his “twilight years” when he realized he had another calling.
“I knew the Lord was involved throughout the process,” he said. “I knew I was being called.”
He has now been pastor of County Line Baptist Church in Vernon Hill for 10 years while continuing his farming.