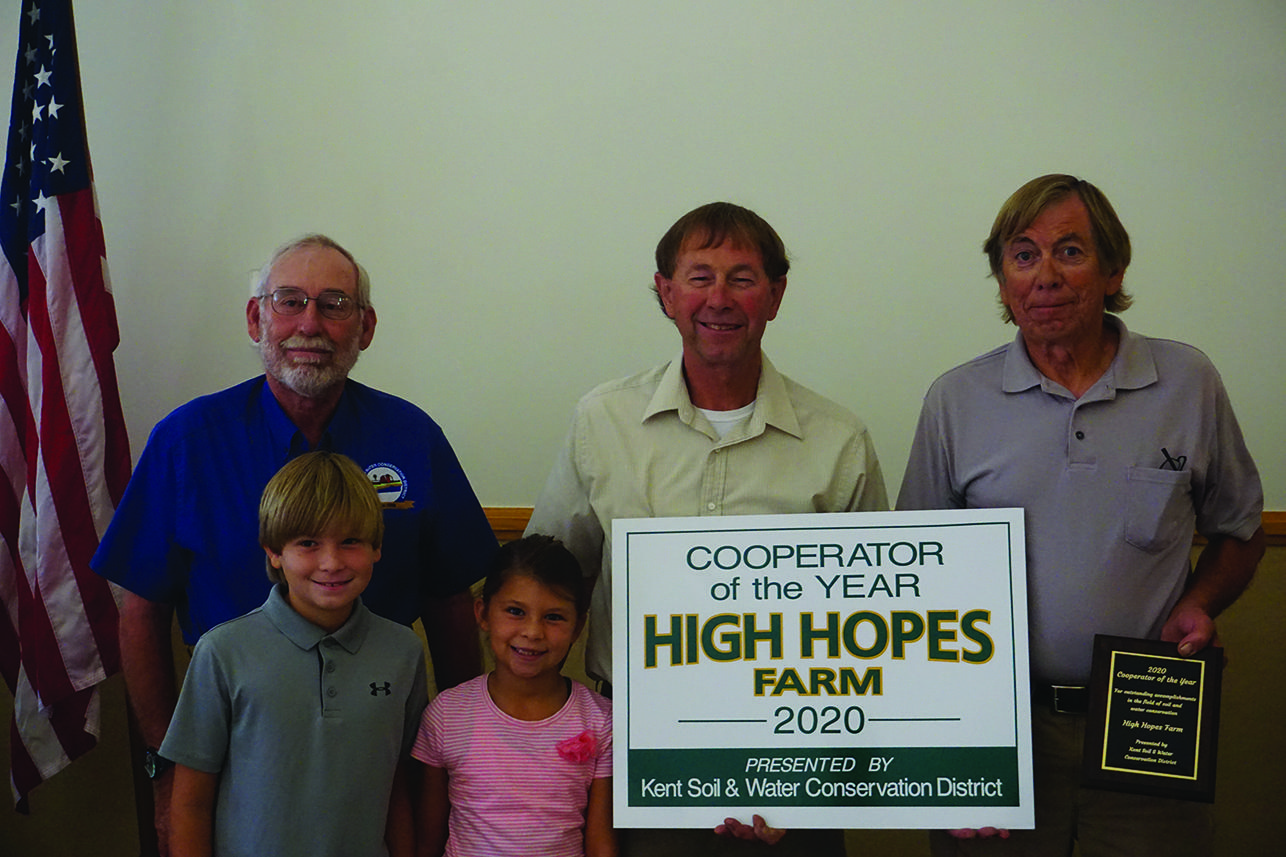 ROCK HALL, Md. —The Kent Soil and Water Conservation District recognized several people for service to agriculture and conservation practices at its Cooperator’s Luncheon on Sept. 11.
Jeff and Doug Galt of High Hopes Farm in Chestertown, Md, were recognized as the district’s 2020 Cooperators of the Year. According to the district, 90 percent of High Hopes Farm is in the East Fork of Langford Creek watershed. The East Fork is the only stream listed in Kent County as a tier 2, which indicates a high level of water quality.
The Galts grow grain and hay in a complete no-till system. They maintain filter strips along all bodies of water on the farm. Jeff’s grandchildren, Blake and Lucy, help on the farm and said they want to be farmers when they grow up.
District Manager Karen Miller who is retiring this fall after 34 years in that role was also honored, received recognition from Maryland Department of Agriculture, USDA- Natural Resources Conservation Service, Maryland Envirothon, the Kent County Commissioners, and the Kent Soil and Water Conservation District Board for her leadership.
After 52 years as a voting board member and 26 of those years as district board chairman from 1990-2016, S. Wickes Westcott, 98, retired from the board and was recognized for his service.
“He has been a champion of conservation in our county for over half a century,” the district said.
Westcott will continue to serve as an associate member.
Additionally, the district remembered former board chairman Tommy Unruh and state forester Teri Batchelor who both died in 2020.
Westcott and Unruh’s wife Patsy each received from the district a gift card to The Mill in Kingstown to purchase a tree of remembrance for their time on the board.
Unruh served for 23 years on the district board. He became chairman in 2016 and held this position until his death in June 2020.
Batchelor was the first woman forester in Maryland, joining the Maryland Forest Service on June 13, 1979 and served as the Kent County Forester for 40 years, coming to the Eastern Shore after first starting in Baltimore County.
Through her career, she planted more than 3,000 acres of new forests –1.3 million tree seedlings. She helped hundreds of private woodland owners each year achieve their woodland management goals, whether for improving wildlife habitat or growing forest products. In total, she gave professional forestry recommendations covering over 36,000 acres of woodland in her career. Mrs. Batchelor worked until her death on July 14, 2020.