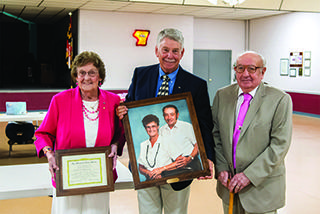 THURMONT, Md. — For decades of dedication to the dairy community and the Brown Swiss breed, Harold and Peggy Long of Long View Farm last month were inducted into the Maryland Dairy Shrine. The Longs established Long View Farm in 1956 near Thurmont, Md., milking Brown Swiss, Ayrshire and Holstein cattle.
Their six children, and many grandchildren have been involved extensively in breeding Brown Swiss as well as leadership in state and national programs. Although the herd dispersed in 1993, the Longs’ impact on the breed lives on today through offspring that traces back to Long View genetics.
They have bred and developed numerous All-Americans, and All-American nominations, won a combined 14 Maryland State Fair Brown Swiss Premier Breeder and Exhibitor banners and had Long View animals selected as junior, senior and grand champion and reserve at more than 20 state shows and 12 national shows.
They noted their greatest breeding success was Long View Jade’s Raisin. Raisin is one of five of the most decorated national grand champions in the breed, being named grand or reserve at the Eastern National Show, Central National Show and the Southeastern National Show more than five times. Other prominent Long View animals included Long View Jubilation Isabel, (Topped National Brown Swiss Sale for $10,000 in 1982); Long View Jetway Oprah (named grand champion at the 2000 World Dairy Expo); and Long View Chall Rosemary (named junior champion at both the Eastern National and Central National Shows as a winter calf in 1993). Long View Farm also exhibited the winning junior best three females at World Dairy Expo in 1993.
Harold and Peggy also developed one of the breed’s most prominent bulls, Bridge View Jubilation with thousands of units of semen sold around the world. The Longs also had much success with several of their Ayrshire cattle with several county and state champions. Long View Fickle’s Whisper was the reserve Jr. All-American Jr. Yearling and 2-year-old. Their most prominent Holstein was Long View Tong Suzy, pictured around the globe to promote the Tong bull.
The Long’s prowess in breeding cattle connected them to the global dairy industry.
“What could the Atlantic Ocean do in order to keep apart friends?” said Enrico Santus, General Man-ager of the Italian Brown Swiss Association. “My father and my mother kept in their most precious memories the time they spent with Harold and Peggy at their farm, or at the fairground. Business suddenly was not the first priority anymore. They shared immediately a strong empathy that no language barrier could undermine.
The Longs have been natural leaders for the beloved Brown Swiss breed and their enthusiasm has been contagious all over the world. Their Italian friends are proud to see this important recognition presented to them.”
Harold helped with the Mid-Atlantic Brown Swiss Calf sale for 30 years as well as managed the Great Frederick Fair milking parlor for 10 years. Peggy is most known for her dedication as a 4-H club leader for more than 50 years and coordinating many Brown Swiss food stands.