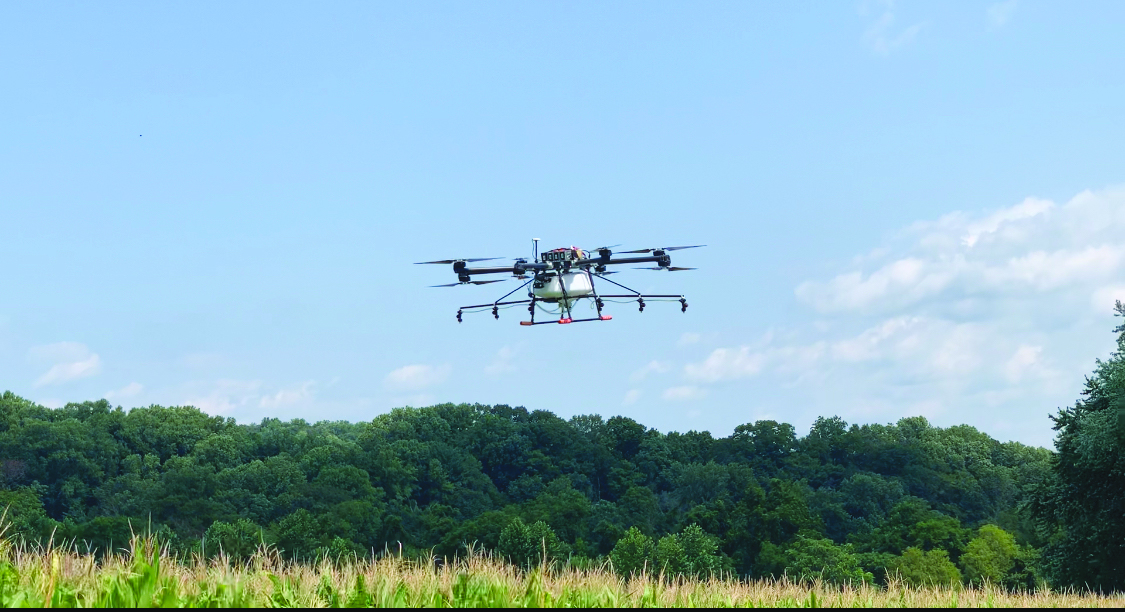 A drone flies over a Harford County cornfield as part of a University of Maryland Extension research project evaluating the effectiveness of its aerial spray application. (Photo courtesy Andrew Kness)

As local research projects on drone use for spray and seed application continue, one finding is clear: More study is needed to catch up to their expanding use in agriculture.
In research funded by the Maryland Soybean Board, University of Maryland Extension agriculture agents Andrew Kness and Erika Crowl evaluated the effectiveness of aerial spray application using drones on soybeans and corn on a Harford County farm.
In the study, water-sensitive cards were placed at three heights in the canopy for both crops in five places in the field to gauge the spray coverage and droplet density at each height.
Two different drones applied water in late August to standing corn at the R4 growth stage and soybeans at the R6 stage.
“What we were really interested in is what the spray droplets would do in the canopy,” Kness said. “The drone does cause a lot of turbulence. Does it get the droplets down further in the canopy? I don’t know.”
The droplet density data after one year suggest the drones have the capability to deliver the recommended densities for herbicide and insecticide application but would need more than double the droplet density demonstrated in the research for adequate fungicide application. Posting their detailed results on the Extension’s Maryland Agronomy News blog at http://blog.umd.edu/agronomynews/, Kness and Crowl said adjusting flight speed is one aspect that needs to be researched further to better define drone capabilities.
Kness said their research, which also included cover crop seeding with drones, was prompted after companies in the area began to offer more drone services beyond field imaging.
“That generated a lot of interest from the growers and then the growers were asking us questions,” he said.
Heading into her third season as co-owner of A1 Aerials in Littlestown, Pa., which offers logistics and operational support for drone pilots, Cayleigh Lucabaugh said there’s been a big increase in drone service companies and interest by farmers in using them.
“It’s almost doubled in size each year,” Lucabaugh said. “The growth is incredible, it’s unreal. The more people that hear about it the more people are interested.”
Joshua Bruno of Wiley and Wiley Farms in White Hall, Md., said he became more interested in drone capabilities after having field imagery taken on the farm.
In 2019, he used a drone service to apply fungicide to some of his corn and soybean acres. He said using a drone allowed him to have the fungicide applied at a more ideal growth stage than a ground sprayer can achieve without extensive crop damage and farming on a relatively small scale — less than 300 acre total — is less attractive for ag plane pilots.
“With my size, to get a plane in here, a lot of people didn’t want to entertain coming out for a 100-acre or a 50-acre patch.” he said.
Bruno, who wasn’t involved in the Extension research this year, said while he didn’t collect hard data from his farm, he liked what he saw from the strip trial.
He said several factors kept him from using a drone again this year but he’s interested in doing it again as well as having a drone spread cover crop seed, spray fencelines, target small areas with pesticide treatment and monitor his beef cattle herd.
“The possibilities are endless here,” he said.
As interest grows among farmers, so does the need for solid data to inform best practices.
“I’m seeing more that there’s research that needs to be done more than anything,” Lucabaugh said.
Lucabaugh, who worked with Kness and Crowl on their research this year, said specific rates for drone application is at the top of the list for needed research. Now, drones apply pesticides at the labeled rates for aircraft which includes airplanes and helicopters, but Lucabaugh and others say the differences of a drone could be significant enough to warrant a separate rate.
“What I want to look into is are these drones able to use less product to be able to have the same effect?” she said.
Bruno agreed adding side-by-side comparisons to other spray vehicles is needed.
“That’s where I think it’s very imperative to do these types of tests,” he said. “There’s a lot of testing that needs to be done to verify all that.”
Kness said sprayer tips and nozzles are another variable that needs attention in future research
Next year for their research, along with different flight speeds, Kness and Crowl hope to vary the application height and add a weighting agent to the spray to better simulate an actual crop protection product.
“That’ll give us at least a little more confidence in what we’re seeing,” he said. “I think there’s potential, we just need to figure it out a little more,” Kness said.