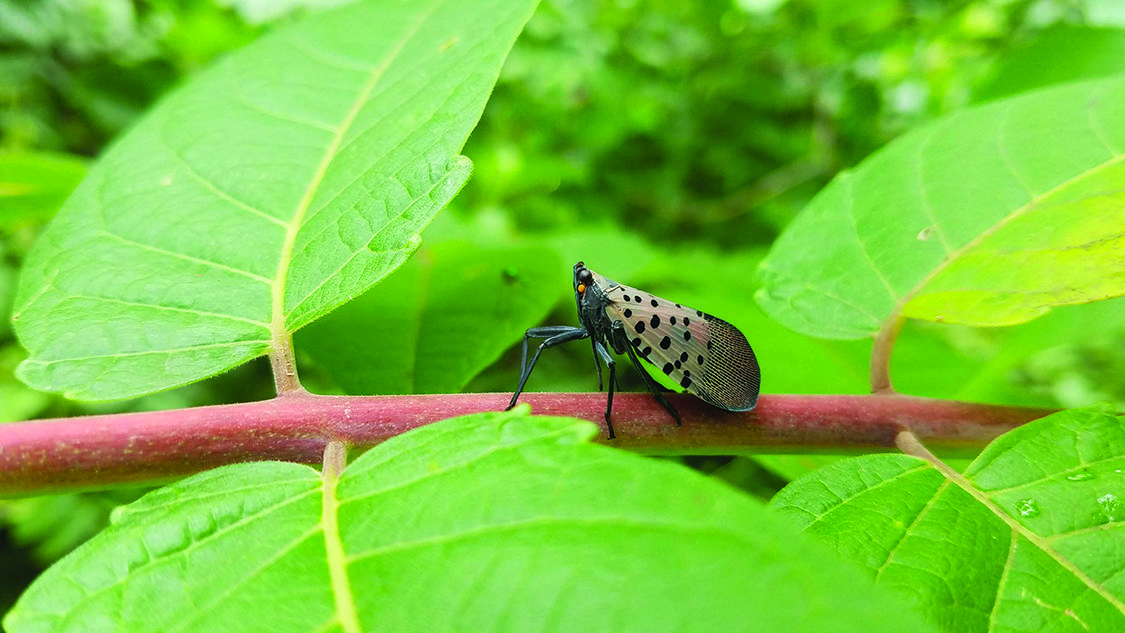 SLF has been confirmed in the Maryland counties of Harford and Washington and small populations were found this year in Kent and Baltimore counties. Confirmed sightings have been reported in all northern counties from Washington County east, as well as in Montgomery, Prince George’s, Anne Arundel, Calvert, Queen Annie’s and Worcester counties. (Photo courtesy Heather Leach)

Aaron Shurtleff of Maryland Department of Agriculture told Christmas tree growers gathered for their annual summer meeting that the Spotted Lanternfly, Lycorma delicatula, was shipped into Maryland on pre-cut Christmas trees from out of the state.
SLF is not just a problem for Christmas tree growers, he said. SLF is a planthopper in the family Hemiplera Fulgoridae. It is native to China, India and Vietnam. It feeds on about 56 different plant species in North America.
The insect pest may have come into United States on stone imported from China to Pennsylvania, where it was first found in 2014.
Despite a quarantine in several counties in Pennsylvania, SLF has been found in several other states, including Delaware, New Jersey, New York, Virginia and Maryland, where it was found in 2018 in Cecil County.
Since then, SLF has been confirmed in Harford and Washington counties and small populations were found this year in Kent and Baltimore counties.
Confirmed sightings have been reported in all northern counties from Washington County east, as well as Montgomery, Prince George’s, Anne Arundel, Calvert, Queen Annie’s and Worcester.
“We are working with USDA on treatment plans,” Shurtleff said.
The insect itself has limited mobility; its spread is attributed to human-assisted travel on vehicles and materials being moved.
The SLF’s preferred host is Ailanthus altissima (tree of heaven), which is also an invasive species from China. SLF also affects other trees from almond to willow, including apple, cherry, hickory, maple, oak, peach, pine, plum, poplar, sycamore and walnut, as well as grape vines and hops.
Research into host suitability is being done on several plants, including tree of heaven, Chinaberry, Virginia creeper, tulip poplar, hops, black walnuts, butternut, weeping willow and silver maple.
Females do not need tree of heaven to feed on in order to reproduce, but do generally wander back to this species to lay egg masses, usually containing 30 to 50 eggs, starting in September.
However, they will lay eggs on anything flat and relatively smooth, including rusty barrels and toys, Shurtleff said.
Egg masses that are not laid on tree of heaven do not do as well, Shurtleff noted. He recommended that growers get rid of tree of heaven if they can.
As it feeds, SLF weakens plants, affects fruit palatability and causes major losses in future production.
It secretes “honeydew,” a sticky, sugary substance that not only promotes the growth of sooty mold and prevents photosynthesis, but attracts stinging insects. It’s an unsightly nuisance.
“They produce a lot of honeydew,” Shurtleff said. “It shoots out the back end of the insect.”
SLF has four life stages. The tan eggs, laid from September until frost, are covered with a grey waxy coating.
Eggs hatch from late April to early May, into tiny, white-spotted, angular black nymphs which begin feeding by sucking the juice from host plants. As they grow older, nymphs molt and become bright red and black with white spots.
Adults first appear around mid-July to feed, mate, and lay eggs. Adults are large, about an inch long. They are strikingly colored insects with grayish spotted front wings and red, white, and black patterned hind wings.
The body is yellow and black banded. “We are already seeing this fourth instar in Maryland,” Shurtleff said.
Shurtleff discussed two methods of biocontrol — insects and fungi.
Three insects are being studied. Two are egg parasitoids.
Ooencyrtus kuvanae, was introduced from Asia in 1908 as a gypsy moth egg parasitoid. It affects 7 percent of egg masses and 20 percent of the eggs within the mass. This parasitoid is here, but not specific to SLF.
Anastatus orientalis is an egg parasitoid from northern China. It is effective on 30 percent of eggs masses and 40 percent of the eggs within.
Research is ongoing, Shurtleff said, but it is possible that the parasitoid might affect non-targets also.
A third insect is Dryinus spp., an ecto-parasitoid which affects second and third instar stages. Up to 40-percent parasitism has been reported in literature. Research is ongoing with two types of fungi that cause disease in insects but are harmless to humans.
Bauveria bassiana is a naturally occurring soil fungus found worldwide and widely used as a biopesticide. Some strains are widely toxic to many insects.
There is relatively little information available on Batkoa major, the so-called “zombie fungus.”
If you see a suspect insect, trap or photograph it and contact Maryland Department of Agriculture at DontBug.MD@maryland.gov.
Contrary to a poster declaring SLF “Wanted Dead or Alive,” MDA wants only dead specimens of any stage, which can be mailed or delivered to: Maryland Department of Agriculture Plant Protection & Weed Management 50 Harry S. Truman Parkway Annapolis, MD 21401.