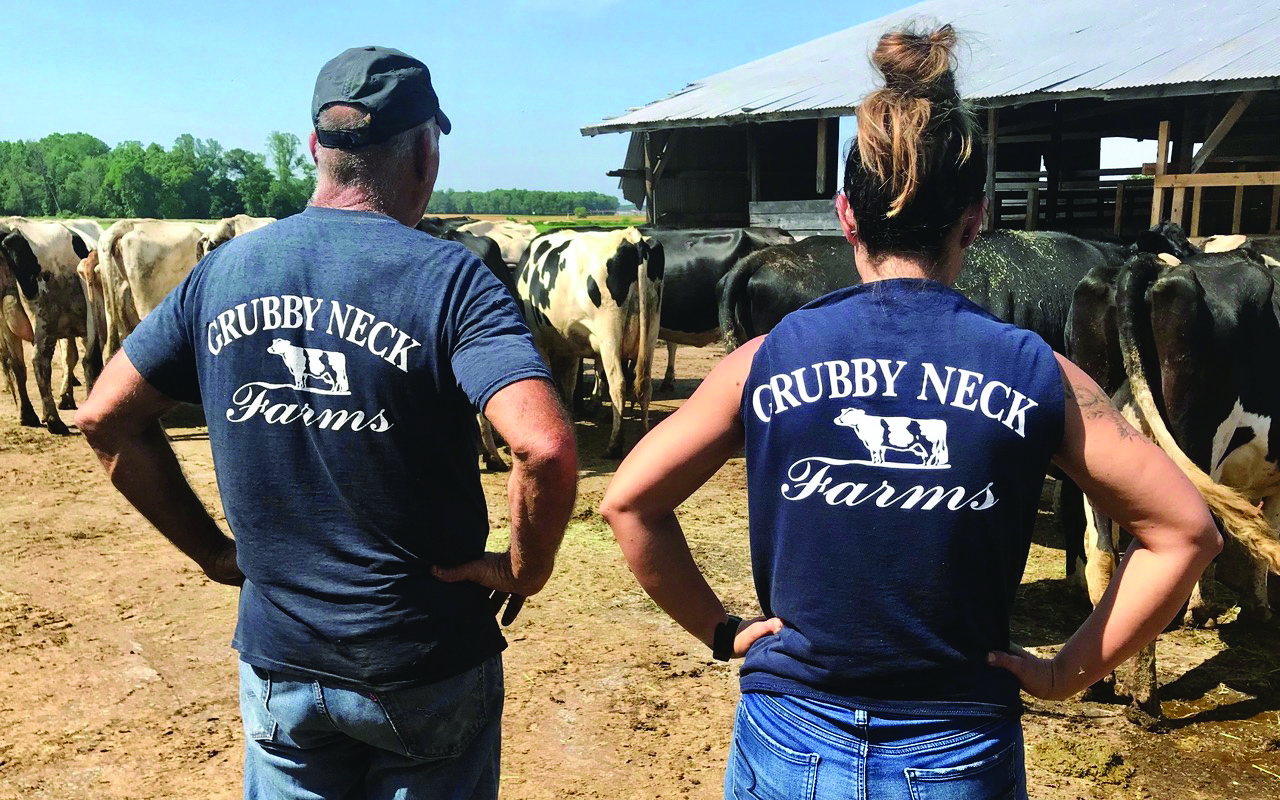 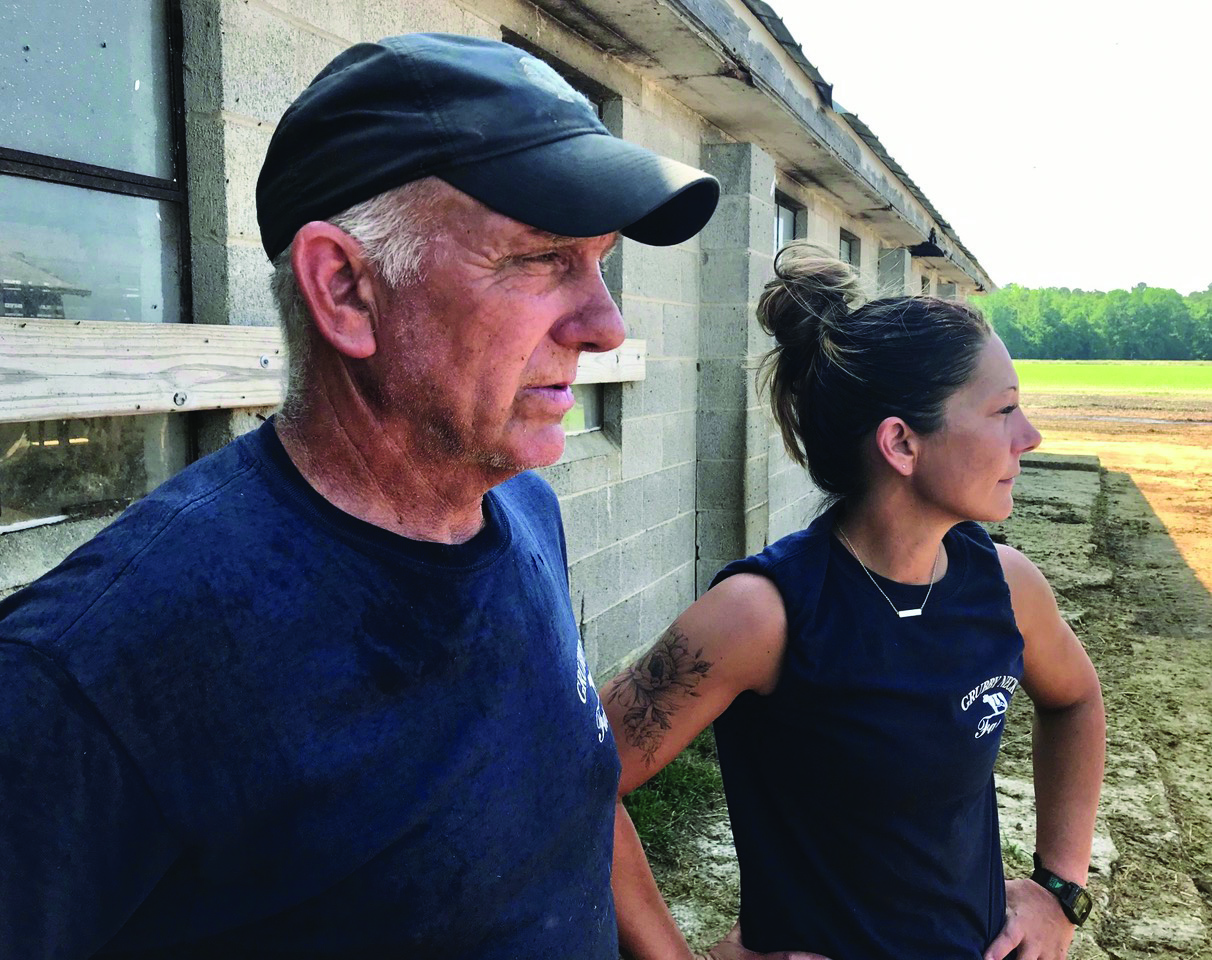 R.J. Meredith, left, owner of Grubby Neck Farms in Federalsburg, Md., and his 38-year-old daughter, Natalie Meredith, decided late last year to jump back into dairying — despite the steady exit of dairy farmers from the region over the last several years. (Photo by Jonathan Cribbs)

FEDERALSBURG, Md. — R.J. Meredith still remembers the day 22 years ago when he stepped out of his house, walked to his dairy barn and confessed to his herd of more than 70 Holsteins.

Milk prices were stubbornly low. He had been losing more than $1,000 a month for a year and the market’s message was clear: He either had to get bigger or get out, and he lacked the acreage to grow. It felt like an unbearable decision, he said.

“I told them I couldn’t go no farther,” he said. “It’s like the emptiest part of my life, but I had to let them go.”

He cried, trucked the herd to Pennsylvania and sold them.

But now they’re back.

Grubby Neck Farms, which was once recognized by Holstein World magazine for having one of the nation’s top herds, has been back in the dairy business since Jan 1.

As dairies across the Delmarva region continue to shutter due to persistently low milk prices and the unfavorable economics of milking cows in this region, the Meredith family has gleefully revived their dairy operation with a new herd of 11 Jersey cows and 25 Holsteins. Meredith is 62 years old.

“Even my milk guy, the DFA guy, said, ‘Have you lost your mind? Everybody’s getting out and you’re getting in,’” he said. “They said I needed to go to the hospital.”

Meredith was inculcated from a young age to appreciate the dairy life. He began working with his mother, Claire Meredith, and father, Robert James Meredith, on the family farm — the same one he owns now — when he was 12. He worked seven days a week through high school. He developed a relationship with the physical, sunup-to-sundown labor of maintaining a dairy farm. He married in 1979. Afterward, he worked seven years without a day off.

When he shut down the dairy operation two decades ago, R.J. Meredith remained in farming. He raised chickens for Perdue. He launched a lawn care service, which his 30-year-old daughter Nikki manages. None of it felt as good as dairying.

“I’d rather milk a cow in a snowstorm than raise a chicken,” he said. “You’re inside. There’s no closeness. … The cows all have names. We feed them with a bottle. It’s like my kids. When you got a small herd it’s almost like family down there.”

For nearly two decades, he said, he felt the cows’ absence. A little more than a year ago, he and his 38-year-old daughter, Natalie Meredith, began to think about returning to dairying. The farm had no significant debt. Milk futures looked promising, he said.

“I didn’t have to take a loan out to get everything fixed up,” he said. “We did a little bit at a time.”

They fixed rotting pieces of the milk barn. They installed used stanchions, a new pipeline, a milk tank and a refrigeration compressor. They power-washed and painted their barn and replaced broken windows. It was a year-long process, throughout which they envisioned what a new dairy operation might look like.

Initially, they planned to raise the cows through the freshening process and sell them. But, predictably, they fell back in love with the herd and decided to begin milking again. Of all the cooperatives they approached, only DFA would agree to take them. They were already picking up milk from a nearby farm, R.J. Meredith said.

Their first day milking was Jan. 1. Everything was going well — until their compressor broke.

“I cried,” Natalie Meredith said. “Because it was such hard work. The truck comes to pick our first tank up after 20-some years, and we had to dump it.”

Things improved after that. They took a picture of their first milk check. The farm was profitable for the first two months. Then the coronavirus shut down the country. Schools and businesses closed. Milk demand dropped 20 percent.

They dried off several of their cows, and avoided any milk dumping, but the farm’s losing $2,500 a month. He’s been here before, but he said it’s different this time. His lawn care service is profitable enough to float the farm, and as long as they’re breaking even within several months, he’ll hang on.

“It’s kind of cool if you think about it though because the cows were gone, but we got them back,” Natalie Meredith said. “It’s kind of like a happy ending to, you know, we went through a rough patch there, but it’s all back to how it used to be like when I was a kid. I never thought it would ever look like that again.”

The farm he was raised on feels refreshed, R.J. Meredith said. His father died in 1999, his mother in 2006 at the age of 81. Even now, when he looks at his kitchen window, he sees his father standing there with his arms propped up on the windowsill, waiting to lecture him for arriving several minutes late to work.